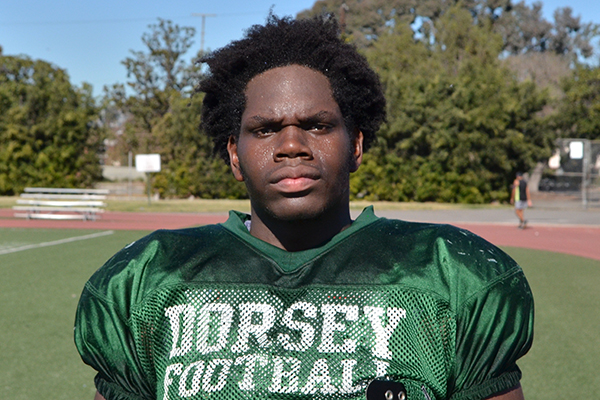 This student athlete knows that balancing a life of competition on the field and learning in the classroom takes preparation, hard work, and dedication. Junior lineman Kendall Hill just finished his second year playing varsity football and maintains a 3.16 GPA while working with student organizations.

“Being a student athlete is harder than people think,” Hill said. “You really have to be dedicated to yourself more than others and when you get to college, it will really pay off, even if you don’t play sports.”

Hill’s favorite class is Algebra 2 and anticipates taking Calculus in the near future.

“I’m a math guy, my whole family loves math,” he said. “There’s multiple ways to do it, but it’s always that one answer.”

Football also runs in Hill’s family; his father played football for Manual Arts. He mentioned how his father was the reason he got into football. Hill’s grandfather would advise him that working hard is not a difficult task.

“I heard it from a coach and it just brought it back to me, working hard is not hard,” Hill said. “It is just a want to, so if you want to work hard it will become easier.”

Hill is also a member of the Children Youth and Family Collaborative (CYFC) and Motivational Men, a student organization on campus that prepares students for life after high school.

“It’s mostly for Black men just trying to get in college,” Hill said. “Preparing us for not just getting into college, but graduating and having a career after it.”

The Dons persevered beyond the rigors of a tough season, enduring a 0-5 start by top programs in California. As the team continued to compete and reach the Division I championship game, Hill learned to rely on new teammates and new schemes.

“Trust is the biggest thing I learned from this season,” he said. “You trust your coach, you trust your teammates.”

A pivotal moment for the Dons was their homecoming game against Culver City. Hill noted how the 27-30 loss sparked a momentum in the Dons.

“As a team, that game set the tone of the rest of our season and proved that we can still do something, we can still get ours,” he said.

Hill decided to attend Dorsey because a lot his friends were attending, he learned that the school prioritizes tradition and family.

“They had so many programs that was open to Black people, it was like you can’t miss the opportunity,” Hill said. “I’m glad I came here and I’m not going anywhere else.”