In the wake of the revelation of the scathing and scandalous racist sentiments and proposals harbored and hawked by three Latino city council members and a labor leader, there has been a virtually unanimous call and demand for them to do the right thing and resign.

Reeking with artificial, exaggerated and misplaced grievances, especially against African Americans and Native Americans, it resembled and recalled the cheap and chalky kind hawked and hustled at Trump and Trumpite rallies and racial reserves and legislative and public gatherings, viciously void of any human considerations of the dignity, rights, and rightful interests of different and vulnerable others.

And so, it shook and shocked us, especially those of us who saw them as actual or potential allies and have worked and struggled together with Latinos since the Sixties to transform, rebuild and govern the city and the larger society in new and more just, equitable and inclusive ways.

But, as important as it is for us to rightfully demand the resignation of these persons, this is only a beginning step in terms of what is to be done. For again, it is important to realize and respond adequately to the fact that it is not just they who pose the real problem, but rather the system itself which produces, approves and supports such thought, speech and behavior.

We talk about systemic racism, but like Americans in general, many of us tend to focus more on persons rather than the system and its structures, policies and practices of oppression. And thus, the criticism, condemnation and removal of problematic people become an end in itself, a satisfaction and substitution for radically reimaging and reordering the racist system itself.

Therefore, there is a lot of cooperative energy and allyship around demanding the rightful resignation of these offending persons but clearly not enough of the same to actually change the structures and policies of the system in which racism and its grotesqueries take root, grow and restrict and ruin our lives. There is a steady stream of texting and talking about our Latino and other allies who have appeared at press conferences, rallies, demonstrations, campouts and confrontations at City Hall.

But, there is less, even little, texting and talk about open and insistent joint and separate demands and actions by these allies and requests by us for them to work and struggle with us at this critical juncture to deal structurally with the problem revealed once again, but which is ongoing and pervasive in the system of governance itself.  And this holds true, not only in L.A., but also in the country as a whole, that is to say, the pervasiveness of the problem of racist oppression and the inadequate cooperative and allied approach to confronting and correcting it.

But, in order not to seem to overreach or divert focus from the issues at hand in L.A., let’s explore what is be done at this critical juncture or as Nana Dr, Martin Luther King Jr. asked, “ where do we go from here: community or chaos?” My sense – both politically and ethically – is that we are already in the midst of chaos to a significant degree, and the only rightful way forward for us as a people, our allies and their people, as well as others so inclined and committed, is to struggle to reconceive and reconstruct a just, equitable, inclusive and good society based on an ethics of shared power and shared good for each and all of us.

There is a burning need for a new politics, new policies and practices and new ways of thinking about power, place, public security and public good. Power must be seen as an ethical imperative and existential good for each community and its members, and thus the concept and practice of zero-sum power, so rooted in the political practice of American society since its inception must be set aside.

And in its place, we must institute the concept and practice of “power with” instead of “power over,” expanding the number of seats at the table, rather than seizing them from the most vulnerable and leaving the powerful in place and untouched. For again, power is an ethical imperative and existential good in its meaning of the capacity to satisfy needs and aspirations critical to human life and development. And thus, it should be embraced and distributed as a shared and inclusive good.

In the rightful pursuit and possession of community power, then, we must not find ourselves enabling, supporting and praising others’ agendas and achievements and neglecting and not advancing our own. This is especially important at this critical time of turning and reckoning, when thought and talk about this vicious and vintage expression of racism reminds us all of the horridness, hurt and harm it represents and imposes and urgently calls us to action.

Thus, we must, without arrogance, apprehension or timidity, carefully and self-consciously map out and mark off the critical fields of our needs and interests and develop and put forth a community agenda which we ask our allies to support as we have supported and continue to support theirs in rightful reciprocity. And we are to pursue our rightful interests and aspirations as a community, not as junior brothers and sisters, deferring to numbers rather than to justice, equity and need, but as equals in dignity and rights, rejecting the tyranny of the existing and emerging majorities.

Indeed, we are to call for a new politics and new and renewed alliances based on the principles of mutual respect, mutual support and mutual benefit, and the collective and cooperative work and struggle needed to achieve these reciprocal relations and practices of shared power and shared good.

For Us, the demand and struggle for community power, power of the people over their destiny and daily lives, was in the Sixties and remains now an existential and ethical necessity in its role of creating conditions for a people that are dignity-affirming, life-sustaining and life-enhancing. Indeed, there is no justice or right in disempowering a people, rendering it incapable of meeting its basic needs, living a good life and pursuing self-fulling aspirations.

We argued during the Black Freedom Movement and argue now that Black Power, African American Power, community power means conditions and capacities of self-determination, self-respect and self-defense. And these goals and practices remain a moral imperative for our community, especially self-determination which is a critical basis for both self-respect and self-defense.

To talk of self-determination means we must control the space we occupy, participate politically in decisions that affect our destiny and daily lives and have space and place in governance that enables us to achieve this. In the context of city governance, it means not only adequate, equitable and effective representation on the city council, but also equitable leadership and employment in the Mayor’s office and on various commissions central to city governance.

And it means also, adequate, equitable and effective leadership and representation in the Democratic Party, which our people has removed off political life-support, saved and sustained for so long without reciprocal reward and recognition due them.

Self-determination requires also an adequate, equitable and effective share of the resources of the city for its various constituent groups and communities. And here, as everywhere, adequacy, equity and effectiveness must be determined not simply by numbers, but especially by need, human need. Indeed, in this moral and human conception, one person needs adequate food and water as much as one hundred persons. And so, it is with other vital human needs of housing, healthcare, education and income, etc.

Clearly, economic security achieved through continuous income in varied forms and from various sources is essential to any real concept and practice of self-determination. And  in addition to equitable leadership and employment in governance, there must be similar policies and practices in unions. Here our Brown allies must work with us to achieve equity in leadership, employment and contract acquisition, honestly confronting employer racial preference for them and others over us and the development and entrenchment of Latino and other ethnic networks that perpetuate and expand themselves and deprive, deny and diminish us.

There is here an irony too, that we who have been so loyal to unions and opened space in unions for Latinos and others, find ourselves slowly losing space, blocked from entry and equitable sharing of both jobs and leadership. And of course, we cannot in good faith and self-respect accept this.

For the defining of self-respect and self-defense as goals and practices of Black community power speaks to our achieving, defending and living a life free of domination, deprivation and degradation and free to live a good and meaningful life and come into the fullness of ourselves as persons and a people.

Voting and Struggling to Remake America: Improving the Conditions and Capac...

Reaffirming the Essential Message of Kwanzaa: Placing the Nguzo Saba at the...

The Gift and Giving of Nana Limbiko: Sharing Kwanzaa Memories and Other Goo... 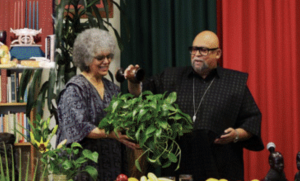 Celebrating Us: The tradition, significance, and evolution of Kwanzaa