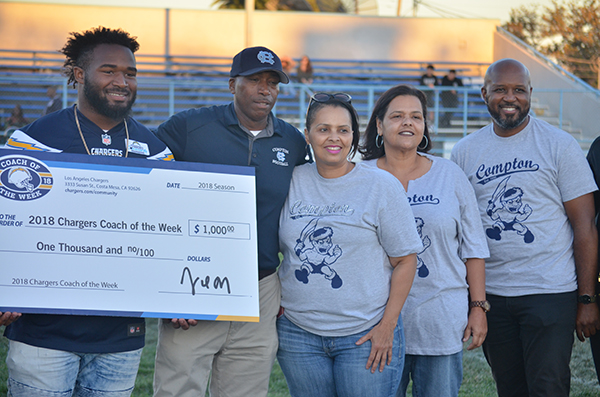 The Los Angeles Chargers honored Compton High School athletic director and football coach Calvin Bryant with a check of $1,000 on Friday. The NFL franchise voted Bryant as Coach of the Week in Los Angeles County. Compton Unified School District board of trustees president Micah Ali was grateful the franchise recognized the school.

“I’ve seen him throughout the years pour his absolute heart into this program, the community, and the students and to do so with the upmost humility and grace,” Ali said about Bryant. “He and his team exemplify the fact that what we are doing within the Compton Unified School District is elevate.”

Compton High hosted a presentation prior to the Tarbabes football team’s game against the Gardena Panthers. Defensive lineman Steven Richardson and two Chargers cheerleaders delivered the check to Bryant and engaged with game attendees. The $1,000 will go to the school’s athletic department.

“I think that Compton High is deserving and I am a Compton High Alumni,” said Compton City Council member and Mayor Pro Tem Janna Zurita. “It’s outstanding, I think it’s a great accomplishment.” 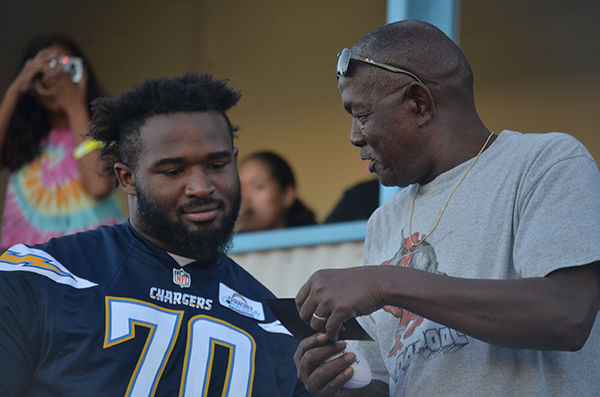 The Tarbabes are currently undefeated with a 4-0 record, routing Gardena 69-6 that evening. Compton Unified School District board members note that the high school is focused on uplifting the youth.

“I have so much pride,” said Satra Zurita, vice president of the governing Board of Trustees at the Compton Unified School District. “The whole district is just turning around, it’s just indicative of having great leadership and backing them up and allowing them the latitude for growth and it resonates with our kids.”

Richardson won back-to-back state titles in high school and played four years at Minnesota. His advice to the Tarbabes is to not focus on the multiple games ahead of them, but focus on each game as it comes.

“That was what we did, like it was a one-week season,” Richardson said. “I would say don’t look at it just being undefeated. Take every week one week at a time, so you’re gonna go undefeated every single week.”