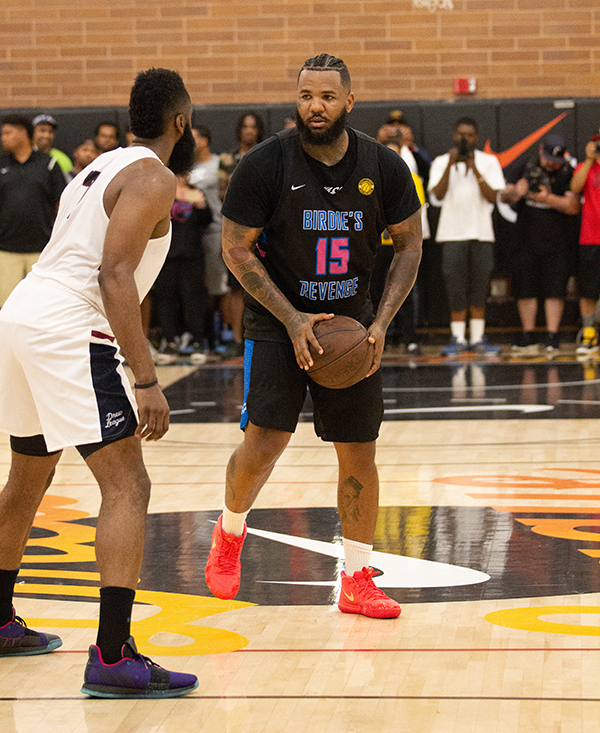 Rapper The Game holds the ball for Birdie’s Revenge being defended by NBA MVP James Harden at the Drew League. (Jada Stokes/L.A. Sentinel)

No Excuse, Just Produce. The motto of Los Angeles’ premiere summer pro-amateur basketball league, the Drew League, was in full effect during the first weekend of playoffs as the stakes to be crowned 2018 Drew League champion were on the line at L.A. Southwest College. Through three days of playoff action, the #1 (BB4L/Birdie’s Revenge) and #2 (LAUNFD/Problems) seeds in both divisions were eliminated from championship contention.

“A lot of these teams thought they were going to come in and defeat what they saw as inferior talent,” stated Drew League writer Aaron Smarter. They came out inconsistent and were vulnerable to teams that are young, hungry and have been playing together for years.”

Baron Davis’s team, BB4L, the #1 seed in the Christopher Baxter Division set the tone on Friday night (Aug. 3) as the team fell to Prodigy 86-84. Detroit Pistons’ Stanley Johnson alongside Drew League All-Star Casper Ware combined for 44 points and even that effort was not enough to advance to the second round.

“This is the biggest upset in Drew League playoff history,” said George Preciado, play-by-play announcer for the Drew League. BB4L was overwhelmed by a nearly perfect performance by former USC Trojan Jordan McLaughlin. He nailed six three-pointers to end with a 25-point performance.

“You can’t underestimate the talent of players like Jordan McLaughlin,” commented Smarter. “You don’t necessarily know who they are, they aren’t necessarily big name players, but they’re really out here to ball and that’s what the Drew League is all about.

The upsets continued on Saturday as LAUNFD battled back from a 20 point deficit to get within six points against the Inland Empire’s No Shnacks. Ultimately, No Shnacks pulled off a 71-65 victory over LAUNFD.

“It’s not really the results that we wanted, same as last year we’re going out early to teams that we have no business going out to, but we can’t do nothing but learn,” commented Los Angeles Clippers newly resigned center Montrezl Harrell, who finished with 17 points and eight rebounds for LAUNFD.

Known as one of the most storied teams in the Drew, LAUNFD was coming off an impressive performance led by James Harden to end Birdie’s Revenge 26 game winning streak. The loss to No Shnacks was the first time in Drew League history that LAUNFD has been eliminated in the first round. On the converse, it is the first time that No Shnacks has made it out of the first round of playoffs.

“It’s cool because out here you play with a lot of different diverse guys, guys that play overseas, guys that are all different levels of competition,” said Harrell. “It’s still great that guys come out here and compete and get after it like this.”

Tension came to a boil on Sunday as the defending champion Birdie’s Revenge engaged in a physical on-court altercation between teammates The Game and Jarion Henry. Though the game resumed, the team was unable to rebound from the turmoil and fell to Redemption coached by professional basketball trainer Keion Kindred. 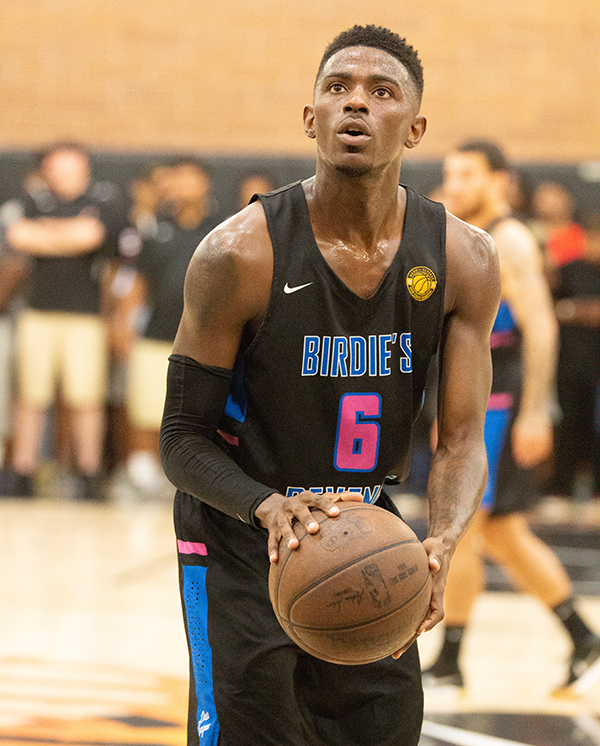 Redemption’s Jonathan Gibson who played five games for the Boston Celtics this past NBA season led the way with 22 points.

“Whenever you need me I can come in and be a great spark on offense or defense,” said Gibson. “I do whatever it takes to win the game.”

Chris Johnson notched 17 points and grabbed 14 rebounds for Redemption. It came down to the final seconds of the game and a pair of free throws. Redemption won 74-72. It was a devastating loss for back-to-back Drew League MVP Frank “Nitty” Sessions, who emerged this season as one of the greatest undiscovered talents out of the Drew League.

“Today we literally beat ourselves,” Sessions commented in an Instagram post following the loss to Redemption. “Wouldn’t change anything though, I’ve learned so much being in these situations!”

“Just this summer alone I bribed Frank Sessions into training with me this summer to improve his game and we’re all bearing witness to what a three-month working out Frank Sessions looks like,” said Kindred. “I’m beyond excited to see him flourish in his career.”

Ironically, it was Kindred’s team that eliminated the MVP. This season alone Sessions had multiple 40 point games including a marquee moment that came against Chicago Bulls’ Denzel Valentine. Sessions scored 44 points against the former 14th overall NBA draft pick.

It is unclear whether Birdie’s Revenge will be returning next season. What is clear, however, is that four teams remain in the playoff race: Nationwide Souljas with Glen “Big Baby” Davis, M.H.P. headlined by Nick Young and DeMar DeRozan, Redemption, and No Shnacks.

The Drew League semi-finals will resume on Saturday at 3 p.m. at L.A. Southwest College.