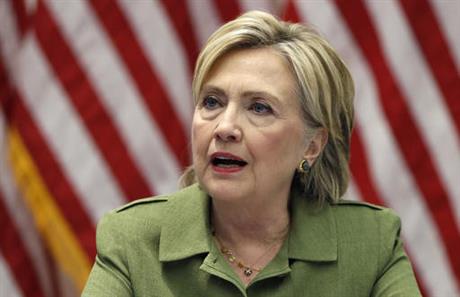 Hillary Clinton said last Thursday the nation needs to work together to repair rifts between police officers and the communities they serve and guard against more discord — a veiled reference to rival Donald Trump.

The Democratic presidential nominee was meeting with law enforcement leaders in New York City, joining with chiefs of police in the days after Trump, her Republican opponent, accused her of being “against the police” following a police shooting in Milwaukee.

Clinton made no mention of her opponent at the start of her meeting with eight law enforcement leaders but her comments appeared aimed at pushing back against Trump’s claims that he was the best candidate to restore law and order following a rash of deadly police shootings.

“We have to be clear-eyed about the challenges we face. We can’t ignore them and certainly we must not inflame them,” Clinton said at New York’s John Jay College of Criminal Justice. “We need to work together to bridge our divides, not stoke even more divisiveness.”

Clinton has made criminal justice reform a central piece of her candidacy and has been frequently joined by a group of black women who lost a child to gun violence or amid allegations of police brutality. She has urged “white Americans” to put themselves in the shoes of “black Americans” to understand the harms of profiling and similarly said everyday Americans should understand the daily challenges faced by members of law enforcement and their families.

Trump spokesman Jason Miller said after the meeting that Clinton “and her allies’ anti-police rhetoric show she cares more about protecting criminals over keeping America safe.”

Clinton said at the start of the meeting that the deadly shootings in Dallas, Baton Rouge, Louisiana, and Milwaukee show the need for the nation “to repair the bonds of trust and respect between our police officers and our communities.”

Clinton was joined at the round-table discussion by retiring New York City police commissioner Bill Bratton, who said earlier this month in an interview with CBS News that Trump’s “shoot from the hip” style and “lack of depth” on police issues scared him.

Aides said Clinton’s meeting had been planned for several weeks and was building upon her outreach to law enforcement during the campaign and following up on law enforcement officials who spoke at the party’s summer convention, including Ramsey.