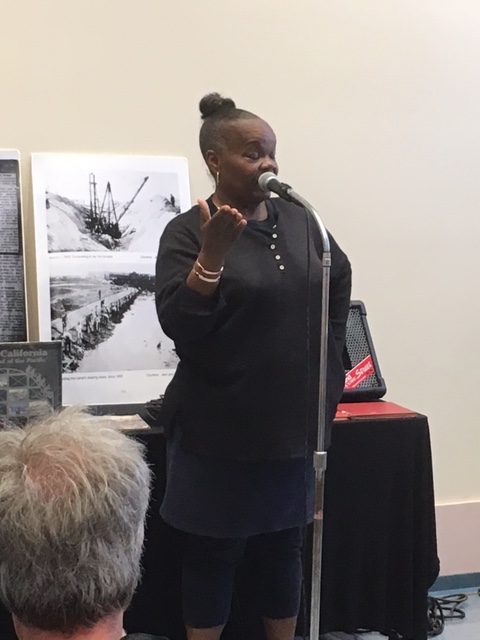 The history of Venice organizer Laddie Williams introducing the exhibit located at the Abbott Kinney Library in Venice beach on display during Black History month. (Courtesy of Darralynn Hutson)

The Abbott Kinney Library on Venice Boulevard in Venice Beach hosted a revival of sorts, during its Black History Month programming; the gathering was part rally, part sermon, part Black history lesson on the forgotten people of Venice Beach, California.

Elders and community activists of the Venice Beach area came to tell their stories of growing up in Venice and the community that they feel is slowly and deliberately being dismantled.  Special remembrances were made of the institution of The First Baptist Church of Venice, located on Westminster Avenue and 7th Avenue in the Oakwood community of Venice. Started by Arthur Reese and 45 dedicated members, The First Baptist Church of Venice was once a thriving place of refuge for the people in need. The church is a huge part of the Black history in Venice and a vigilant group of resident and activists are fighting to keep the doors of the church open to the community while developers from the Neighborhood Council have professed other plans as new owners of the church structure. “45 years after slavery had ended these small group of Venice residents made a place for themselves to worship.” says organizer, Laddie Williams, “This history needs to be told and we’re going to continue to tell it, as their great, great, great grandsons and daughters.” 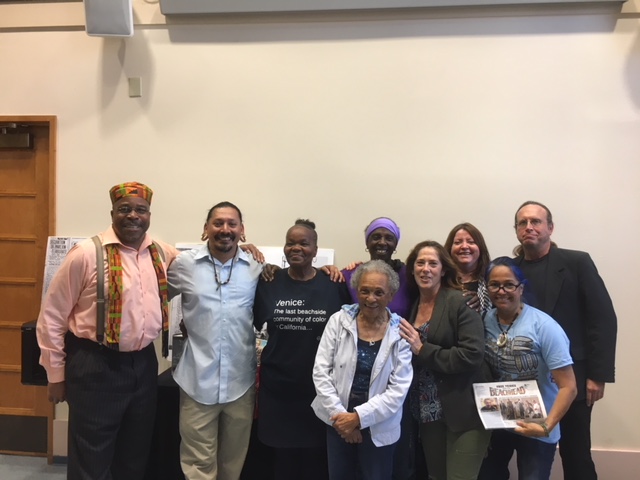 Williams, Venice residents and community organizers compiled a moving exhibit of photos and newspaper articles on the importance of African American’s contributions to Venice’s history; a history that goes untold in modern Venice paperbacks and history books. “Black people and native people have been in Venice since 1910 but no one talks about it. We’ve been completely erased from the history of Venice,” says Laddie. “This is why we’re doing this today. We all know that African Americans played a great history in the world, especially in the United States. So to be White washed out of all of the books written about Venice and the history of Venice is not fair. No fair at all. So we have to be the change that we want to see.” 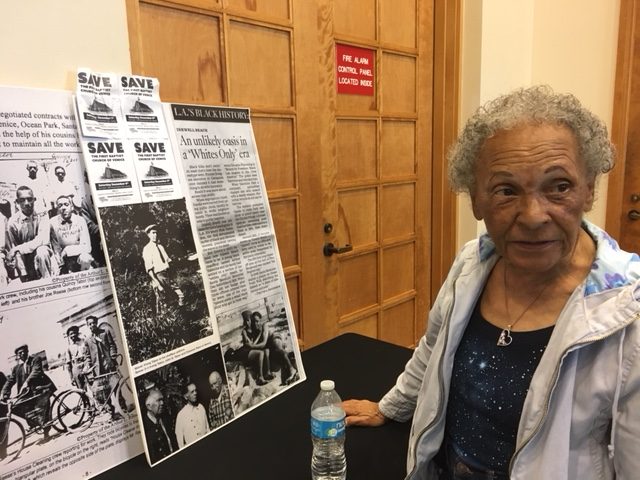 Elder Jatuan Valentine standing at the Abbott Kinney Library in front of a display case with a newspaper article on the Dzinkwell,dz a beach created for us by us. (Courtesy of Darralynn Hutson)

The program of speakers included Pastor Oscar Rhone who gave a mini sermon on the why Jesus is needed today; Cynthia Fenton who spoke on the importance of telling our stories, Lydia Ponce who read a moving poem of survival, Miguel Bravo who read from his blog and Elder Jataun Valentine. “You probably heard of what they call the “inkwell,” beach? When I was a baby going down there, it was all grass. It was called ‘Spook’ beach. I actually thought that was the name until my cousins said that the reason why they called didn’t like the name “Inkwell” is because back in the day when I went to school we used ink to write with the pens. The color was always dark blue or black,” remembers Jataun Valentine. “We’ll let me tell you what I just found out two years ago about this beach. My grandfather, Arthur Valentine, Sr. had taken my father and my aunt and my grandmother to a beach in Topanga Canyon and the police told them they had to leave because it was for Whites only. My grandfather said no. They (the police) beat him up and shot him in the leg. When he went to court, they said that my grandfather had a weapon but it had taken two years and finally they dropped the charges and he won the case.  That’s when he decided and the other Blacks decided that we needed a beach of our own. What you know now as the ‘Inkwell’ use to be a horrible beach where the sewage would come from the ocean. This is where the Black people went. Coming from Los Angeles, Santa Monica and all over, feeling that we had finally got our own beach.”

Activist Miguel Bravo led the audience is a Native American ancestral song, which spoke of the energy of trauma that still lives on the streets of Venice. Remembering the untimely death of his father when he was a young boy, Miguel believes that saving the First Baptist Church of Venice, isn’t just about religion as much as it is about history. “Our existence is our existence but I feel that spirit of Venice in here; the Venice of when I was growing when we were all one people who only wanted to love and grow our families and our communities.”