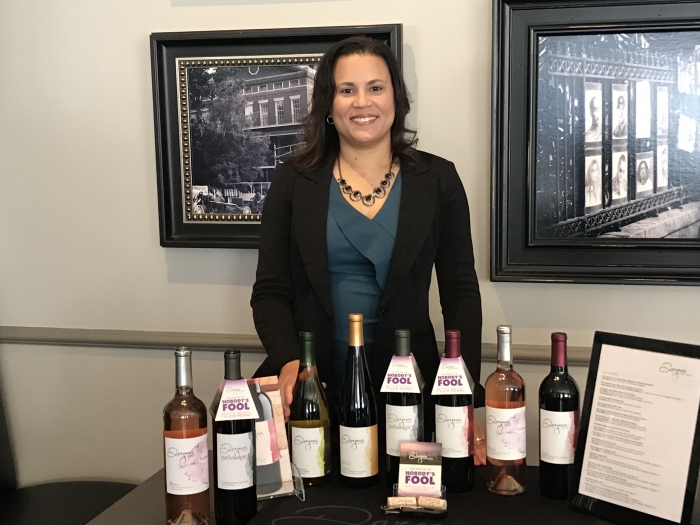 Dawna Jones, vintner and plant scientist, poses with her Darjean Jones Wines which were featured in Tyler Perry’s “Nobody’s Fool”

Dawna Jones, Ph.D., remembers having an amazing childhood in Opelousas with her parents, Randolph and Priscilla Darjean, and three siblings. But one distinct memory may have unintentionally guided the 43-year-old plant pathologist into the winemaking business.

“My mother dabbled in making various fruit wines when I was very young, but I do not remember assisting in the process aside from picking the fruit, usually pears, from the trees that grew in our backyard. I do distinctly remember the smell of the fermenting fruit. I loved that smell,” she said.

That fermentation science would fascinate Jones who “loves science deeply” and has been interested in agriculture since she was a teenager in public school.

Today, Jones is a first-generation winemaker and owner of Darjean Jones Wines.

As a student, she researched plants and plant diseases at Southern University and A&M College, University of California – Davis, and the US Department of Agriculture. Her dissertation research focused on Pierce’s Disease of grapevine, requiring her to spend countless hours in California vineyards.

“I kind of fell into wine gradually,” she told HelloWoodlands. “I do remember tasting a Merlot grape one day while walking through the research vineyards and thinking that if wine tasted half this good, it must be fantastic.”

Dawna Jones studied plant science at the University of California Davis
Following graduate school, she worked as a diagnostic plant bacteriologist for the government while her husband, Chauncey, completed fellowships in anesthesiology. (Dr. Chauncey Jones is also an SU grad who studied animal science.)

While in Maryland, she tested plant material brought into the country, developed testing methods, and investigated outbreaks of plant disease. For seven years, she was a national security analyst. Then, his career required them to settle in Texas. That move nearly 10 years ago was the impetus for her career shift back to grapevines and a new adventure in winemaking. It was then that her husband asked, “What would you do if you could do anything you want?” and she answered, “I’d make wine!”

“Winemaking, for me, seemed a natural progression,” said Jones who is now a mother of two with an international WSET Level 3 Certification for grape growing and winemaking. Through partnerships with six California vineyards, she has created and produced eight boutique Darjean Jones Wines that are “spirited, adventurous and possess a charisma that will seduce wine lovers of all kinds.”

Since 2010, her wines have won 34 competition metals and debuted in Tyler Perry’s “Nobody’s Fool.” Darjean Jones Wines are served at top restaurants in Texas, sold at wine cellars in California, and have a national wine club following. The website features wines that are available for direct order and recipes perfect for pairing with her wines. “The love of good food and drink is coded in my DNA,” Jones said.

When asked about the future of agriculture, Jones said, “I would like others to understand the limitless number of careers that fall under agriculture, including economics and technology. I would like more children to consider careers in agriculture. From organic farming to high tech laboratories, there is a place for all of us to assist in feeding our growing world.”

“It is so important for our youth, SU students and alumni to see the homegrown talent and successes of Dawna and Chauncey who share their racial identity and are both graduates of the Southern University College of Agricultural, Family, and Consumer Science,” said Renita Marshall, DVM, associate dean of the College. “Having Dawna as a role model is vital to signaling a sense of belonging for women of color. Her continued pursuit of excellence in ag research and business are definitely not going unnoticed in the African American community nor the Southern University Ag community. ”

Jones said, “I hope that people remember me as a good friend. I am not looking for a spot in anyone’s history book.”