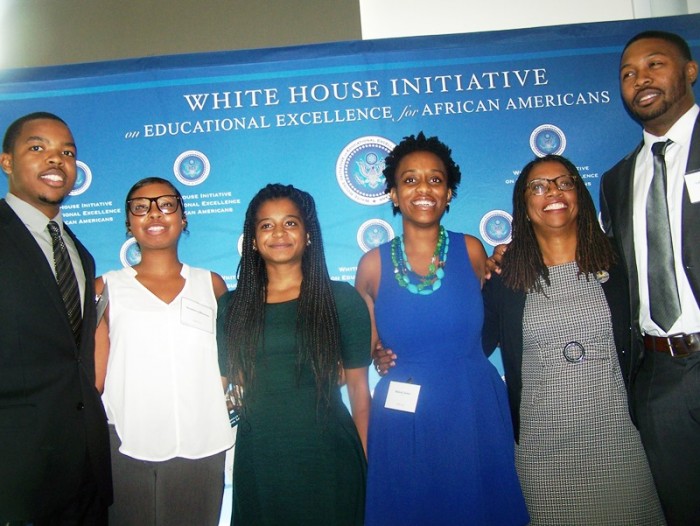 During the summit, there were two panel discussions where students discussed the challenges they faced in their college careers and outlined solutions to improve the academic experiences of African Americans.
LaRon Armstead, a 2012 LMU graduate, came from humble beginnings and revealed that he never dreamed of going to college as a youth.

“I was gangbanging, doing drugs, and fighting on the playground,” Armstead, a Watts native, recalls. “My single mom raised five of us. One of my brothers just got out of prison after doing eight years,” he said.
Armstead said his attitude changed in the eighth grade when a YMCA was constructed in the neighborhood.

“I met a white man by the name of Dan Larsen at the YMCA,” Armstead recalls. “He said, ‘There’s something about you. If you want to go to college, I’ll finance you to go to the school of your choice.”
Armstead said that Larsen “planted a seed” in him about pursuing higher education. “I wanted to go to college. I started to change,” he said.

Armstead said that after being accepted to LMU, he immediately went into “culture shock.” “I was so disconnected from my peers,” he recalls. “I almost dropped out because I couldn’t handle the level of work, but my survival instincts kicked in. I decided to persevere and overcome adversity.” Armstead said he reached out to tutors and professors on campus and his level of work improved.

Armstead urged students to connect with teachers, tutors and advisors if they need assistance at college. “Don’t give up,” he said. “Integrate, network and socialize. You have to get comfortable with being uncomfortable. That is the only way you will evolve and change.”

Kiana Gums, a 2018 LMU graduation candidate, said that she had experienced “micro aggression” on campus but combated it by displaying her intelligence in class. “I have experienced white students making racial comments then they’ll turn around and say, ‘Oh, that’s not you. You’re a different kind of black.’”

Gums also observed, “Blacks are not included in study groups. I may be intelligent, but simply because I’m black, I’m not included.”

Gums also observed that she is not seen just as an individual. “You feel like you represent your whole race,” she said. “Just because I’m African American doesn’t mean that I represent my whole race.”
Darren Ward, a recent graduate of LMU who grew up in Lancaster, advised students to “reach out.” “Professors, deans, and even people at my workplace have helped me in my success, and I pass it right down,” he said.

Filmmaker Effie Brown, a featured speaker who produced the films “Rocket Science” and “Dear White People,” advised students to actively participate on campus and in the classroom.

“First of all, don’t be afraid to speak up,” she urged. “You are exposing your colleagues to a different point of view. Conversation goes a long way. Secondly, if you are able, mentor and hire other minorities. It is your responsibility to make room for someone else. Get them to the table and make sure they thrive,” she advised.
“Inclusion is worth it,” said Brown. “By us being at the table, everyone can see that we just want our fair share.”

The White House Initiative on Educational Excellence for African Americans was held in collaboration with the Loyola Marymount University’s Office of Intercultural Affairs, Government and Community Relations, the African American Alumni Association and Ebony magazine.