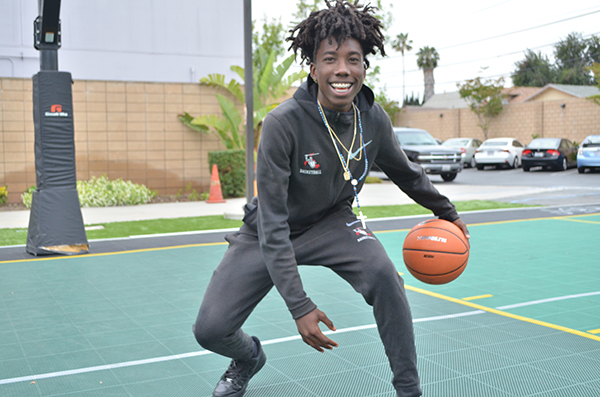 Senior guard Shamar Lair has seen improvement in his gameplay on the basketball court since his freshman year. During his senior year, he noticed that his mentality had also developed. This would pay off for Lair as he would help the View Park boys basketball team get a CIF State championship title.

On the road to the state title, Lair maintained a 3.4 GPA. His favorite class is Biology.

The Knights had a 27-8 overall record and was ranked 63rd in the state. Their battle for the Division I City Section crown was cut short in a 67-62 loss to University in the semifinals. Lair noted how their state bid was a second chance.

“When we lost city, I thought we [were] out of it,” Lair said. “We got the call for state and just ran with it and never looked back.”

View Park also fared well against the Coliseum League with a 10-2 overall record. Lair recalled his best performance of the season during a game against Dorsey High School.

“[I made] the clutch free throws to win the game,” he said. “That was a good game, that was my best game this season.”

Lair noted how implementing defense while playing in tournaments aided their efforts in the Coliseum League.

“Tournament play, we [were] big on defense,” he said. “Our whole league was tough.”

View Park battled against Stuart Hall of San Francisco for the State Championship. Lair commended the talents of the Stuart Hall players in their match up. Stuart Hall had no quit in them and were “very competitive” according to Lair.

“The championship game was crazy … it seemed like the longest game of the season,” he said. “Stuart Hall they were a good team. They weren’t easy at all, they gave us a fight the whole game.”

Although they had a strong defensive prowess throughout the season, that was not the only quality Lair mentioned as a good characteristic for a championship team.

“Y’all got to be family on and off the court and always have each other’s back no matter what,” he said. “Y’all got defense, y’all working together, [you] can’t go wrong, scoring is gonna come naturally.”