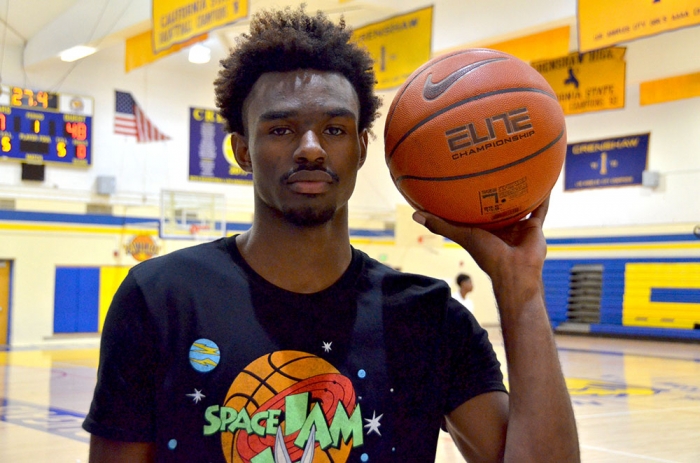 A slam dunk exudes a certain level of amazement and excitement among basketball fans. Crenshaw senior forward Justin Cornelius works to provide that to those who watch him compete.

“On the basketball court, anything you do is magnified. They get to see exactly who you are, and you really get to feel what’s going on with the crowd,” Cornelius said. “After I dunk, I look at the crowd, they’re all hype; I can feel that.”

Prior to playing basketball, he played soccer and football. Cornelius believes his talents in basketball will carry him farther than his other sports.

“I went to the park one day and people said I was good at it and I can really do something with it,” he said. “So, I decided to keep playing.”

Playing football and soccer gave him skills to excel with basketball. Playing at wide receiver and quarterback helped Cornelius be able to use his arms to box out, get around players and be more physical. Competing in soccer gave him more experience with footwork and endurance.

“When I run up the court, I don’t get as tired as other guys because I’m used to running the field,” Cornelius said.

Making Fastbreak dunks after steals is one of the many duties Cornelius must execute during basketball games. The best advice a coach gave him is to not let fear alter his gameplay.  Last season, Cornelius learned the importance of having mental toughness.

“We took a couple of bad loses and I just happen to play bad some games,” he said. “You don’t have to worry about certain plays that happen that go wrong, just always keep your head up, always try to stay positive.”

“We played way better because we didn’t feel any pressure,” Cornelius said. “We were playing schools that we don’t normally play during the school year, so we saw a lot of new faces and we saw a lot of different teams that were nationally ranked.”

As a student athlete, downtime must be used to finish schoolwork, according to Cornelius.

During lunchtime, you can find him in a class or in the school library completing homework. Cornelius knows it is difficult to get his work done when he gets home after practice.

His favorite class was a history class he took last fall semester. What fascinates Cornelius is how rules that were created generations ago are still relevant today.

Learning about Greek Mythology also interests Cornelius, he enjoys the stories of the Greek gods and goddesses and how they all connect.

Outside of basketball and school, Cornelius helps the choir at his church by passing out choir robes every week.

“Chess is like basketball, there’s strategies and there’s a different pace of playing,” he said. “Sometimes you move all your pieces real fast, go forward and try to attack the other side, just like in basketball.”