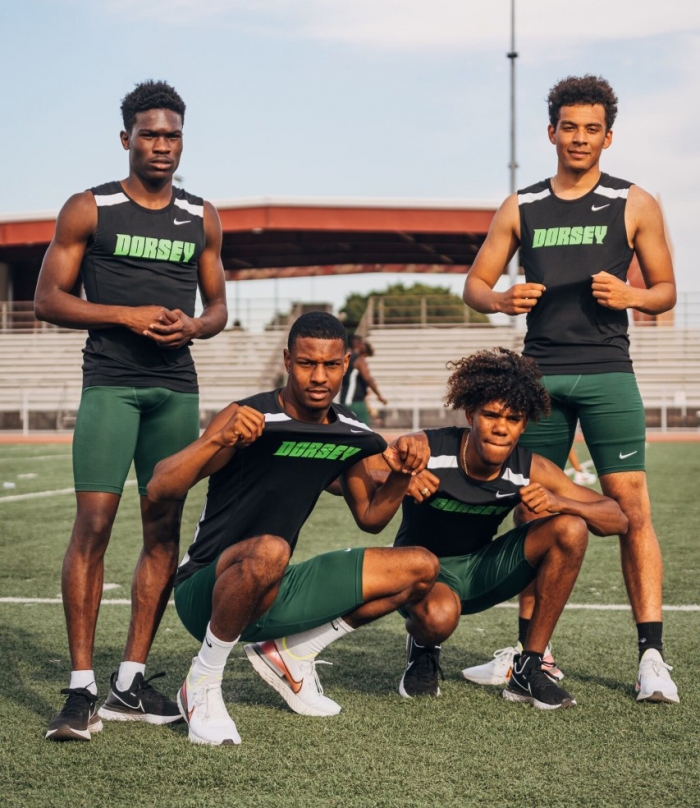 Dorsey senior Adam McKinney is a dual-sport athlete, playing football at Santee and joining the Dorsey Dons in time for track season. Football toughened him up and gave him a competitive spark, which helped him in track and field.

McKinney was preparing to be a leg in the 4x400m in what would have been his first year competing in track and field, but his first competition was canceled due to the COVID-19 pandemic.

“I was excited to get a taste of my first track meet, official, and it was canceled the day before my birthday,” McKinney said. “I was honestly, at the time, I was heartbroken because I was starting to really, really love track.”

Although he was unable to compete for the Dons, he gained many lessons through practices. Gleaning from his teammates and coach developed his athleticism and mentality. The talent of his teammates inspired McKinney to push himself while track coach Ken Matthews advised him to commit to the process of improving.

“I always struggled with confidence as an athlete, coach Ken he taught me to love myself,” McKinney said. “Coach Ken removed those restraints from me, take those chains off weighing me down.”

Through the quarantine, McKinney learned how to be more grateful for the times he spent with the boys and girls track team.

“Now, I know to not take anything for granted, live in the moment because before I was living kind of like a homebody,” he said. “It taught me to be more accountable for myself with schoolwork … you have to hold yourself accountable not just academically, but physically and mentally.”

McKinney noted how other students look up to athletes for excelling in their classes while competing for the school.

“My coaches are always telling me student first, then athlete,” he said. “You just have to make sure you keep a healthy balance of the two.”

During his high school years, McKinney took AP United States History, World History and Geography. His favorite class at Dorsey is Creative Writing. He enjoys the opportunity to write without the typical restraints that comes with writing essays.

“I’m really into English and reading,” he said. “The teacher was really nice, and she would help us be more creative and work on our fictional writing.”

McKinney desires to get a high GPA to make the team look good for Dorsey.

His coaches at Santee and Dorsey were there to help McKinney get through problems that would arise. The teachers cared about the students and left them with valuable lessons.

Improving is a process that McKinney chose, he knows that it will give him positive outcomes. Outside of school and sports, McKinney helps his mom teach elementary school kids one week during the summer.

“I love the kids, they love me and I love them,” he said. “I love being able to go there and help them out, help them with their work.”