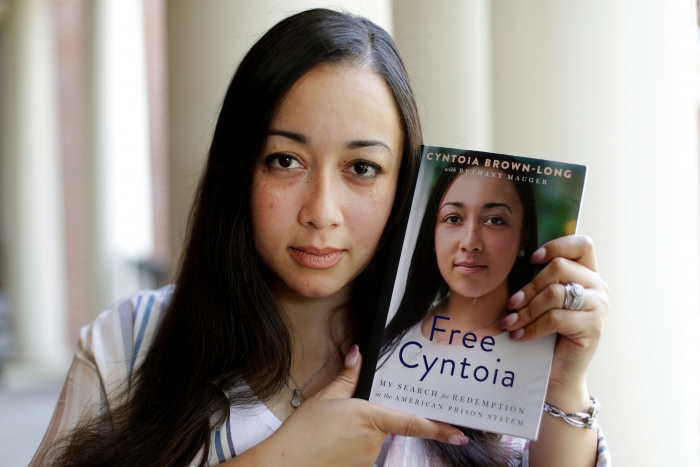 In this Sept. 20, 2019, photo, Cynthia Brown-Long holds a copy of her book, “Free Cyntoia: My Search for Redemption in the American Prison System,” in Nashville, Tenn. (AP Photo/Mark Humphrey)

To say Cyntoia Brown’s life has been complicated is an understatement. Brown is a young, Black woman sentenced as an adult to life in prison when as a teenager, she killed Johnny Mitchell Allen, a 43-year-old man, who had solicited her for sex. Brown maintained she killed Allen in self-defense after he purchased her from a pimp and later appeared to be reaching for a gun to kill her. Prosecutors insisted Brown robbed and murdered Allen in cold blood.

Brown was supposed to spend 51 years in prison before she could even be considered for parole but her precarious case caught the attention of criminal justice reform activists, A-List celebrities and eventually Bill Haslam, the Governor of Tennessee.

Upon learning of the details surrounding Brown’s case and calling on a higher power, the former governor granted Cyntoia Brown full clemency August 7, 2019, releasing the 31-year-old from the Tennessee Women’s prison. Brown who once had given up hope after losing all of her appeals, had been granted “mercy” in a socio-political climate that readily demonstrates anything but mercy or empathy towards black women.

Brown, who strengthened her relationship with Jesus, found a God-fearing husband and the importance of education while in prison, set about to making her new lease on life count by continuing to do what she calls “God’s work” and share her story in order to help others.

One of the many ways Brown is sharing her story is through her book, Cyntoia Brown: My Search for Redemption in the American Prison System(Simon and Schuster).

Brown’s book offers a detailed look at Brown’s life behind bars and her traumatic childhood, which Brown attributes to the unfortunate direction of herearly life. When speaking with Brown, it is clear she is getting used to her newfound freedom and has not had the privilege of thinking too far into the future.

Her answers to the questions are short and to the point and focused on the past and the here and now. When asked what motivated her to write a book, Brown states matter-of-factly, “God.”

“I prayed and felt that it [writing the book] was necessary. God gives us testimony so we can share them and not so we can sit on them,” Brown offers. The discussion of time is a constant in Brown’s answers. 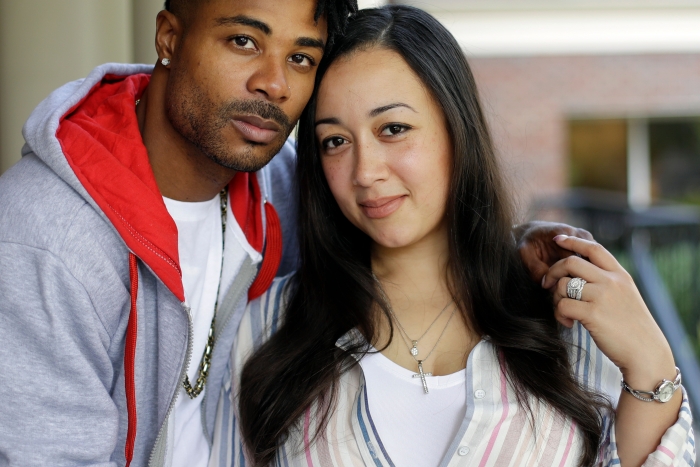 In this Sept. 20, 2019, photo, Cynthia Brown-Long and her husband, Jamie Long, pose together in Nashville, Tenn. For nearly half of her life, Brown-Long was locked up. At 16, she was arrested for robbing and killing a man she says picked her up for sex and later sentenced to life in prison. But two months ago, Brown-Long, 31, walked out of a Tennessee prison after successfully petitioning the Tennessee governor for her clemency. She’s now speaking for herself in her memoir, “Free Cyntoia: My Search for Redemption in the American Prison System,” released Tuesday, Oct. 15. (AP Photo/Mark Humphrey)

She is a young woman who has gone from having nothing but time with a life sentence, to a new world where everyone wants some of her time.

Brown has a clear understanding that time is of the essence and she has to capitalize on new-found fame and empathy if she is going to help young girls struggling in their young lives just as she had when turned out as a child.

How might her life have been different if she knew at a young age there was more for her? “I know that a lot of people have been through what I’ve been through, so I felt it was necessary for people to see representations of their own experiences,” Brown says. “They need to know there is help out there for them.”

Help that evaded Brown at every stage of her early life. Brown, whose birth mother drank during her pregnancy, giving up for adoption at age 2. Her adoptive mother provided a stable home, but Brown didn’t get the treatment or help she needed to address her issues with fetal alcohol syndrome and abandonment, leading to her life as a runaway.

As a runaway, Brown was drugged, beaten and sex trafficked by a pimp named, “Kut-throat.”

Brown, who received therapy and treatment to help cope with her traumatic childhood while in prison, found writing the book took her to some “dark places.”

“I thought I had done a lot of processing of my childhood, but once I was working with (co-author Bethany Mauger) and she was asking me questions, I had to go back into those moments and that was kind of tough some times,” Brown says quietly. “This is Bethany’s first book too,” she adds letting me know they both underestimated the effect going into those dark corners would have on their lives.

Brown had endeavored to write this book many times while in prison but couldn’t do it. She would start and stop. Start and stop again. The disappointment of losing all of her appeals and not having the judges find any mercy or compassion for her and all she endured as a child wreaked havoc upon her mind.

Always a believer [in Christ], Brown kept praying and asking for what she wanted and was not getting it, which was difficult to understand. Brown credits relinquishing control of her life to God with the freedom that would eventually come. “After I realized I had to give God complete control over my life, that’s when things started changing,” including her ability to write her book.

“I was at a church service and the minister had come around and was anointing everyone and she said God said write the book. I went back to the cell and I called my husband and I said what do you think? He said write the book,” she shares. “I started writing the book and it started flowing out of me. Within three months I had a manuscript.” 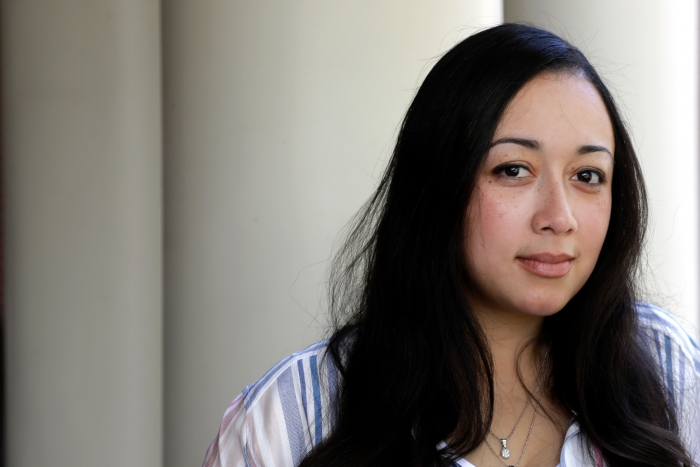 Brown’s story has been covered all over the news, social media outlets, criminal justice reform spaces, college campuses – you name it and #FreeCyntoiaBrown has been a topic of discussion.

When asked, what will people get from her book they haven’t already gotten from the media and she responds, “The full truth.” “For one, everything in the interview is very surface level, cleaned up and it’s not entirely correct,” she states. “You’re going to get the full truth. It goes a lot deeper than anything you’ve seen in an article. So many people have told me after reading the book, they got to experience it,” says the first-time author. It refers to the traumatic life she lived up until being sentenced to life after fighting for her life. “So many things affected me from the time in school, to the time in the facilities and you really get to walk through that journey with me.”

Readers will be able to fully step into the shoes of Brown and understand all of the things that had to happen for society to lock up and throw away the key on the life of a 16-year-old black girl who had seen the worst life has to offer from her beginning in the womb.

Despite the horrific acts that transpired in Brown’s young life, she is aware that some people think she should still be in jail and should not be forgiven. Brown who believes everyone is “entitled to their opinion,” knows she has to focus on telling her story to help the girls who are currently in the same position as she was as a teenager.

When asked what advice she would give to girls mired in the same dire circumstances she faced, she simply states, “I want them to know there is another side of life.”

The criminal prison reform advocate adds, “There were so many times when I felt there was nothing and nobody out here to help me. But, you have to allow yourself to be helped to get to the point to see there’s better for you and it’s possible. Know who you are in God. Know that he’s looking out for you even when you can’t see it,” says Brown, a free woman who has clearly found her voice.

Although she speaks energetically about God, change and submission to God’s will, Brown shies away from questions about movies or what movie star should play her in a movie about her extraordinary life.

Brown grows quiet, and says she has no idea. “I haven’t even thought about that,” she says, giving voice to the fact freedom is still new for her.

The here and now appears to be her safe place and criminal justice reform is where her attention resides. Brown’s sense of urgency is wrapped in her obedience to God, the need to help save others from the painful path she took as a child, the desire for redemption and the recognition that time waits for no one.