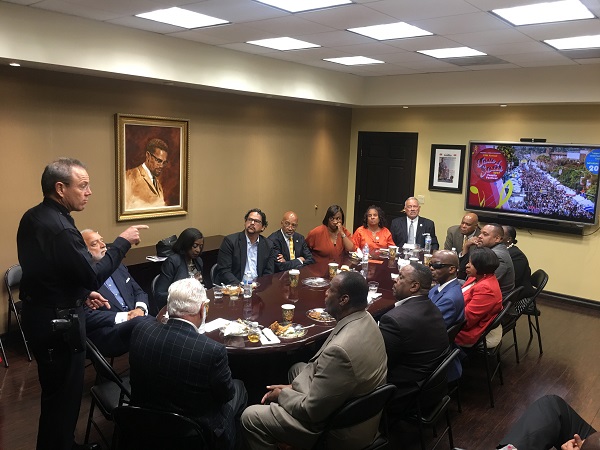 New LAPD Chief Michel Moore continues his tour around the city with a stop at the Los Angeles Sentinel Newspaper to share his vision with community leaders. (Sentinel file photo)

Continuing his meet-and-greets around the city, new LAPD Chief Michel Moore stopped by the L.A. Sentinel on June 19 and heard about the pressing policing concerns from South Los Angeles African American community representatives.

While Moore has been the chief for only 17 days, his 36+ years with the LAPD – including eight years as assistant chief –  enables him to hitting-the-ground-running as general manager of the 13,000-member department.  His schedule so far involves sharing his vision with officers and staff at police station roll calls as well as repeating that message to the community and listening to their issues.

“My commitment to you is that I need to listen to what the needs are in South Los Angeles.  I am a resource to you and I need to hear from you when you have concerns relative to the department, whether those are specific concerns relative to an event or more broadly as challenges exist in the overall temperament as the LAPD does it work,” said Moore in his introductory remarks.

Acknowledging the historically tense relationship between communities of color and LAPD, Moore insisted that he will conduct more listening sessions that focus on improving his department’s rapport with African American, Latino, Korean, Filipino and Pacific Islander residents.

In addition, Moore aims to conduct a customer service survey to learn the public’s opinion of policing in their neighborhoods, increase diversity throughout the LAPD ranks, update technology resources for officers and institute a “policing with a purpose” philosophy for law enforcement staff.

“I want to look at the activities that we are doing and how they map back to policing with purpose, which means the purpose of safeguarding the lives and property of the people we serve, building trust and acting with integrity. Those things should define what our activities are in neighborhoods across the city,” he explained.

“If we’re putting resources in areas that are over-policed and undermining the trust of those communities thinking that we’re helping, that is the LAPD of old. I grew up in that organization and the outcome was terrible. How are we policing so that we demonstrate compassion? Everyone deserves dignity. If we don’t respect people, people are not going to respect us. It’s a mutual responsibility. And when we’re not respected, we still must take the high road. That is what we’re sworn to do,” he said.

Many community representatives questioned LAPD’s policy on use-of-force, which has resulted in the death of several African American young men.  Moore responded that his goal was to ensure that officers had the right temperament, proper tools and training, and awareness of the regulations when employing that action.

“I also need to make sure they know that there are boundaries and when they break those boundaries, there will be accountability and judgment is what they must take and own.  One of my primary tasks is to ensure that those boundaries are identified and standards are met. If they’re not met, discipline is meted out, that there is a consequence,” said Moore.

Turning the focus back on diversity, Charisse Bremond-Weaver, president and CEO of Brotherhood Crusade, asked Moore for African American statistics in LAPD’s upper ranks. Moore replied that approximately 15 percent of the command staff is Black, but he wants to do more to increase the number because many of the existing staff will retire in the next three-to-five years. 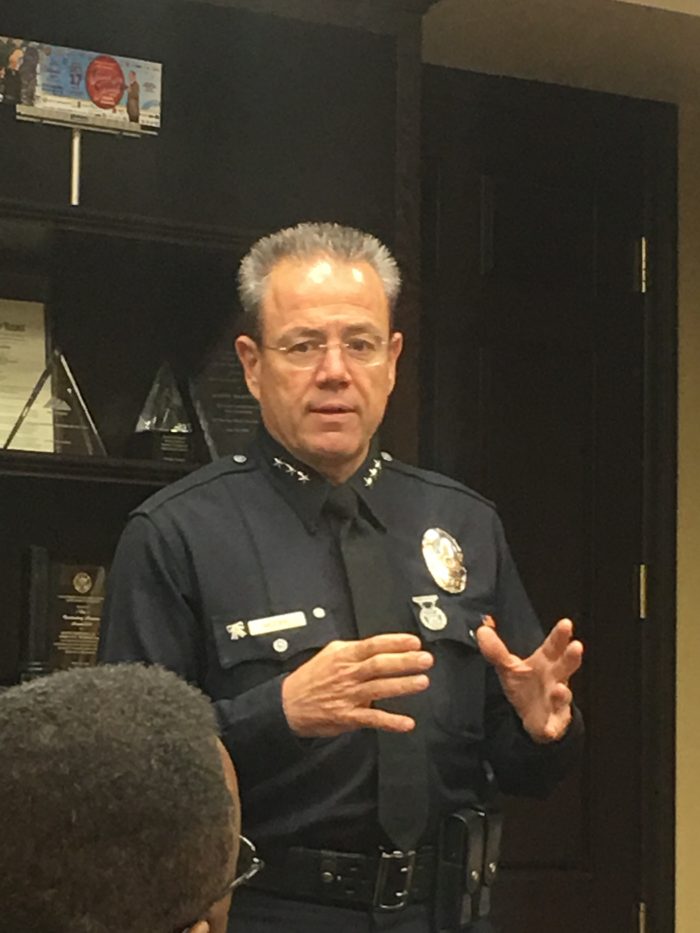 Laphonza Butler, president of SEIU Local 215, inquired about Moore’s strategies for recruitment and building trust in the community and his answer was “shared partnerships” in that effort.

“If we promote community partnership at a neighborhood level, I believe as I get resources and we engage communities in non traditional ways –  foot beats along Crenshaw Blvd., attendance at street fairs – supporting ways to give a community life, that’s what I believe will build trust and build the opportunity for us to ask for help (with recruitment),” Moore said.

Other topics discussed with the chief included supporting bail reform, allowing inmates to be registered to vote, and collaborating with the Board of Police Commissioners to change policies detrimental to minorities, to which Moore expressed willingness to work with community leaders on each issue.

Summing up the meeting with Moore, Bakewell said, “I’m happy that he came.  He does seem like he has a different approach.  He professes to be committed to accountability by LAPD to the community, but time will tell. It’s not their philosophy or conversation we must judge, but their actions.

“I will reserve judgment for the moment and give him the benefit of the doubt, but I stand ready, willing and able to hold his feet to the fire because the future of our community is very much depended upon it and certainly the future of young Black men and women is determined on how he is able to lead LAPD and work with our community.”