Wednesday, August 12, the Los Angeles City Mayor Eric Garcetti acknowledged critical spaces infected by COVID-19. Many family dynamics made polarizing turns for the worst; Garcetti announced the bridge that will navigate those who search for immediate assistance. The mayor also updated the community about new features within L.A. Testing sites. The demand for more testing options continues to grow, Garcetti touched on a factor in the near future that might be available.

Adjustments have been made to the hours of testing site operations due to the summer season. They will be open from 8 a.m. to 2 p.m., Garcetti reassured that this will not affect the level of tests available. The mayor is still calling for more efficiency within testing capacity and turnaround time. Garcetti announced the assembly of a National group to explore rapid at-home testing. Pilot tests will be distributed in Los Angeles, if approved there can be a testing capacity of one million test results a week. 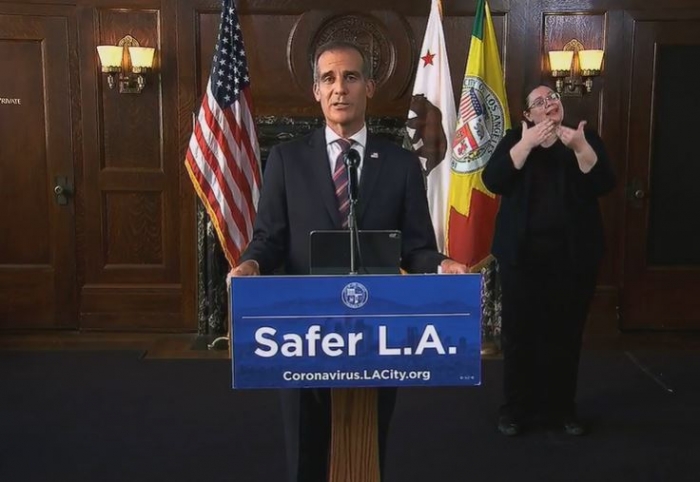 Garcetti admitted to the hardships felt across Los Angeles, unstable financial situations have shattered and are exasperated to the point of devastation. The mayor announced the launch of L.A. Connected, it will be the bridge for resources for extremely affected financial situations. The city created a platform to support families that are seeing their darkest days.

Found within the city press release, the mayor stated, “COVID-19 has dealt a devastating blow to Angelenos’ economic security, and L.A. Connected will be the bridge between tens of thousands of households and their ability to make rent, pay the bills, put food on the table, and stay afloat,” He continued, “Our job as a City is to save lives and safeguard livelihoods — and today’s effort will help us build a sturdy foundation of justice, equity, and stability for our neighbors struggling to get by.”

Deputy Mayor of Economic Opportunity and Chief Equity Officer Brenda Shockley stated, “Equitable recovery from the COVID-19 crisis begins with ensuring that all Angelenos receive the Economic Impact Payments they are entitled to,” She continued, “This moment of unprecedented health risks and unmatched economic insecurity requires the City’s infrastructure of social service systems to serve a vital role in addressing the continuing needs of Angelenos. WorkSource and FamilySource Centers are central to the foundation of our City’s social safety net. We want and urge everyone to get connected.”

The goal for L.A. Connected is to Magnetize the resources to the communities that need them the most. The city plans for this platform to be an educational tool to empower families to receive the help they need. It is a network that includes various service providers through Los Angeles City WorkSource and FamilySource that will help Angelenos apply to the following: unemployment insurance, file their taxes, apply for as much as $8,000 in tax credits, and access federal stimulus checks, known as Economic Impact Payments, which total up to $1,200 per adult and $500 per child.

Mayor Garcetti shared the latest updates regarding the coronavirus outbreak on Wednesday.  The level of severity remains at ‘Orange,’ current county statistics reflect 2,428 new infections, bringing the total to 217,197.  Mayor Garcetti disclosed 851 of those reports came directly from the city of Los Angeles.  The average cases in the city fall over 2,000 reports; the positivity rate in the city of Los Angeles is slightly over 7%. There were 51 additional deaths due to COVID-19, bringing the total to 5,109 fatal cases.

In relation to the current condition of the pandemic within Los Angeles, the mayor said we are making progress. He described the actions that took place over the last three weeks as success. The gradual mission of flattening the curve is growing visually within the numbers. Five out of six state ordered benchmarks were heading in the right direction, reflecting a glimmer of silver lining for healthier statistics in the future count.