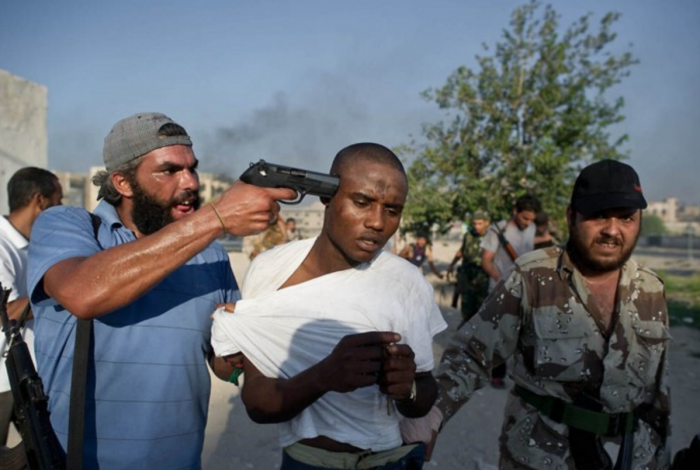 A modern-day slave in Libya is being escorted to an auction block. (courtesy of Twitter)

Amidst a multi-government backlash against recently discovered slave trading in Libya, hundreds of West African migrants are being returned to their homes.

The backlash has also inspired the African Union’s goal to return at least 20,000 migrants from the North African country around the middle of January.

Members of the Congressional Black Caucus (CBC) have been among the groups rallying around freedom for the trade victims, who according to news reports, were refugees trying to escape their own countries and reach Europe by way of Libya.

“This is the most egregious event that has taken place in the world,” said CBC foreign affairs and national security task force co-chair Congressmember Karen Bass.

“Slavery is a crime against humanity. The people living in Libya don’t control a large portion of the land. Many are living in refugee camps and don’t largely control those either. It is important that the FBI and U.S. government step in and help. This is a global issue that needs immediate help from all international parties including the European Union, the African Union and the United Nations.”

The atrocities were first publicly revealed in November when a video surfaced of men being sold at an auction in Libya for $400. CNN conducted an investigation which unearthed further evidence, including an auctioneer offering a “digger… a big strong digger” to would be purchasers. Though the video and evidence from the investigation were only recently released, aid groups and those advocating on behalf of migrants said these incidences have gone on for years.

Since then, the shock of Libyans being sold sparked worldwide outrage and international protests. 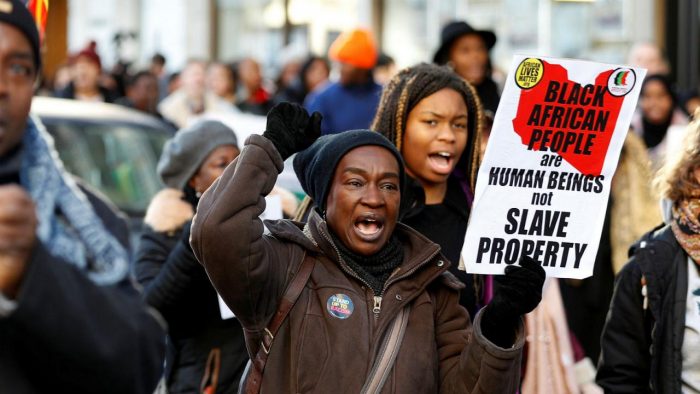 Demonstrators protested against slavery outside the Libyan embassy in London on Saturday, December 9, 2017. (Courtesy of Reuters)

Earlier this month, graphic images of the slave trade made headway on social media. Celebrities such as singer and songwriter Chris Brown, rapper T.I., model Naomi Campbell, and many others have posted their reactions to the horrific images of Libyans being auctioned like animals.

The shock of the Libyan slave trade has led infuriated demonstrators protesting outside the Libyan embassy in London demanding the embassy to put an end to the slavery auctions.

Recently, CBC members wrote an open letter to Libya Ambassador Wafa Bughaighis, expressing their outrage and calling for the country’s government to conduct an immediate investigation into the existence of slave auctions and forced labor involving migrants and refugees.

“Slavery is a crime against humanity and we strongly condemn the slave auctions of refugees and migrants,” they wrote.

“The United States of America knows all too well the repercussions of slavery, as African Americans continue to suffer from the social and economic injustices that began under this insidious institution.  We  call  for  the  Libyan  government   to  conduct  an  immediate investigation  into  the  existence  of  slave  auctions  and  forced  labor  involving migrants and refugees, and other sub-Saharan Africans, who have made their way to Libya in an effort to reach Europe. 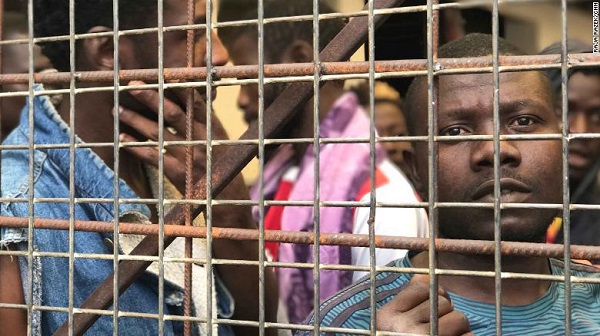 : In September, officials conducted raids in the Libyan coastal city of Sabratha, saying they rescued thousands of migrants from warehouses and farms, where some had been sold into forced labor. (courtesy of Raja Razek/CNN)

The letter goes to say that the members of the CBC urge the Libyan government to “hold smugglers, traffickers, detention center guards, and anyone else involved accountable.”

“We also  encourage  the  Libyan  government  to  allow  the  United Nations High Commissioner for Human Rights to regularly monitor and publicly report  on  the situation  of  all  refugees  and  migrants  in  Libya  including  those detained in official detention centers.  Finally, we call for the country to manage migration flows in a humane manner…” 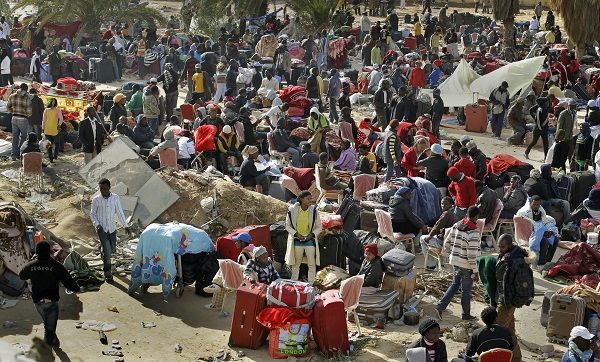 Nigerians and Ghanaians sit with their belongings in a makeshift open-air camp at Tripoli International Airport in Libya Tuesday, March 1, 2011. While many European countries evacuated their citizens from Libya, thousands of foreigners including migrant workers from Egypt and Sub-Saharan countries such as Nigeria and Ghana have been camped out at the airport for over a week, many unable to leave the country and fearing for their safety in the unstable situation. (AP Photo/Ben Curtis)

The CBC recently introduced a resolution in the House to address the slave auctions and asked for a chance to meet the ambassador and Libya’s prime minister before they moved forward with it.

A report from the United Nations’ High Commissioner for Human Rights released in September, reported various violations and abuses migrants faced once they reached Libya, while trying to escape issues like war, poverty and climate change in their own countries.

“It’s a total extortion machine,” Lenard Doyle, who is the director of Media and Communications for the International Organization for Migration in Geneva told TIME.com.

“Fueled by the absolute rush of migrants through Libya thinking they can get out of poverty, following a dream that doesn’t exist.”

On Friday, December 8, the CBC was able to accomplish their goal of meeting with Libyan ambassador Bughaighis. The meeting led by Bass, discussed CNN’s footage and report on the slave trade. 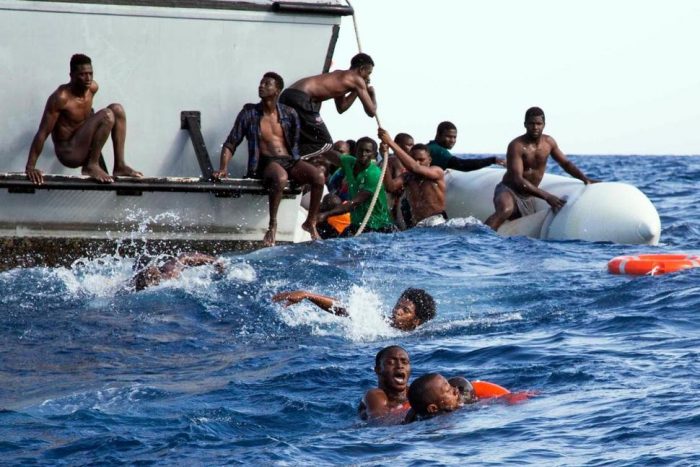 In this photo provided by Sea-Watch, migrants from a sinking inflatable dinghy try to board a Libyan coast guard ship during a rescue operation at sea in international waters off the coast of Libya on Monday, Nov. 6, 2017. Five migrants have died as a German nonprofit organization, Sea-Watch, and the Libyan coast guard tried to rescue them from their foundering boat in the Mediterranean, with each side blaming the other for the mishap. (Lisa Hoffmann/Sea-Watch via AP) The Associated Press

“We met with the Ambassador out of the profound concern that in this day and age, people are being sold as property,” said Bass.

“The international community must operate on the assumption that we don’t need further proof, what we need is to stop it. The Ambassador has agreed to provide us a detailed update on the specifics of the Libyan investigation and will continue to work with us transparently to respond to the migrant and refugee situation. I look forward to the much-needed progress on this issue.”

Aside from the work of the CBC, the release of CNN’s footage on the Libya slave trade investigation has also resulted in the creation of a petition calling for the United Kingdom government to pressure Libya to end modern slavery. To date, the petition has more than 264,000 signatures.

According to Euro News, the Parliament is set to debate the petition on December 18. Thanks to CNN’s efforts, their investigative footage is said to be considered the first hard evidence of the “21st century slave trade in Africa.”