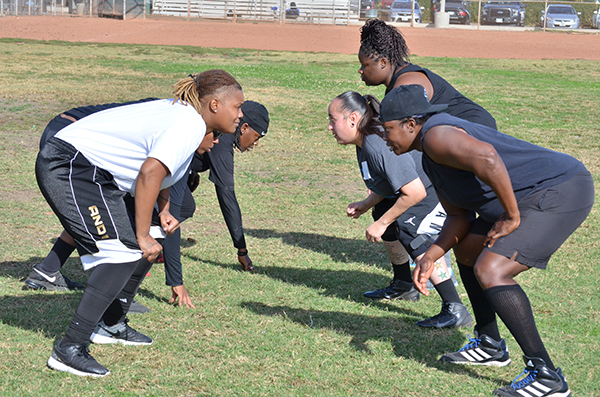 Women playing tackle football have been going on for years in American history. Throughout the decades, there has been league competitions between organized teams. There are teams all throughout the nation, in cities like Washington D.C., Tulsa, OK, and various cities in California.

The Independent Women’s Football League (IWFL) has 24 teams in four different divisions.  Among those teams is the Los Angeles Bobcats; formerly known as the Carson Bobcats.

“We are some fast pace, hard hitting women out there,” said Demetrea Hardiman, co-owner of the Bobcats. “The thing about us is we do this because we love it.”

The L.A. Bobcats will begin their football season on April 7 with a home game against the Utah Falconz. Three games will take place at their home stadium, the Jackie Robinson stadium in Rancho Cienega Park, according to the Bobcats website.

Hardiman and Kris Brannon are co-owners of the Bobcats along with Bobby Hosea Jr., the founder of the team. Brannon and Hardiman also play for the team, Hardiman plays middle linebacker and nose guard while Bannon plays center and guard.

The Bobcats are a young club, going into their third season. In 2016, the team had an 8-0 record and came in second in the Pacific Conference. 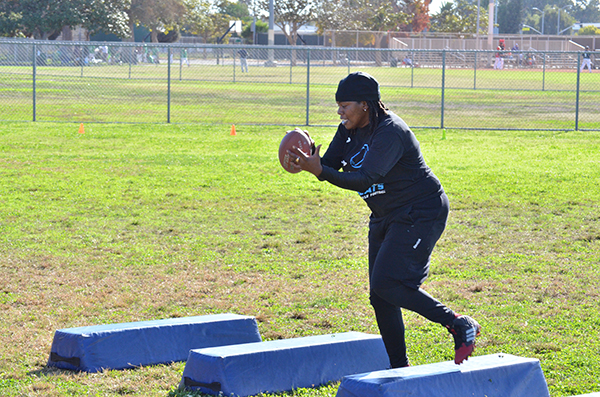 “So much fun, hurts like hell, but it hurts oh so good,” Hardiman said. “There comes a point and time like after the first games, we’re comparing bruises, it becomes badges of honor for us.”

Tryouts were held in November and December and preseason training started in January.

“That’s including preseason workouts, preseason training, practices,” said Hardiman. “We’re out there three days a week, so it’s pretty good. We have constant movement, so it’s not just hanging out or socializing, we’re active at all times.”

Hardiman and Brannon manage the communication, recruitment, operations and fundraising. In order to spread the word about the team, they would get a booth at local events and businesses. They give out not only information about the Bobcats but on women’s health as well; this is their community outreach initiative.

“We’re not doing this as a ploy to recruit people, we’re actually concerned about the community and their health,” Hardiman said.

To promote community wellness, the Bobcats open their practices to the public. They also have a doctor on staff. The Bobcats are striving to work with Girls Play L.A., in an effort to hold camps and create a flag football league.

Brannon mentioned the difficulties of gaining company sponsors and support. 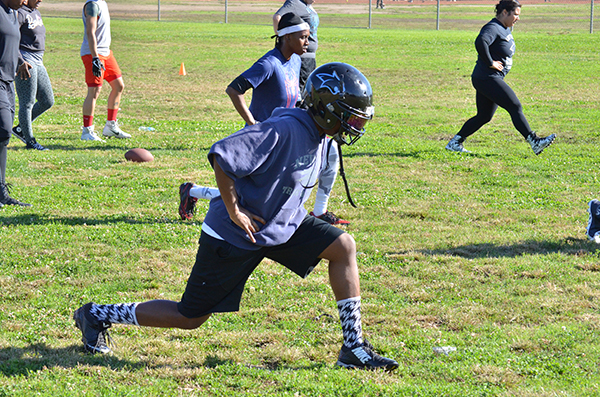 “You get those people that are like ‘okay, you guys are just trying to be guys, [you’re] trying to do a man’s sport,’” she said. “The companies that really believe in women empowerment and gender equality, they’re donating, they’re with us.”

The athletes must pay fees in order to compete and travel with the team; they do not get paid to play games. Traveling fees can also be a challenge for a 31-member team, especially if some players must take flights instead of joining the team on Friday road trips to away games.

In the past, the Bobcats have traveled to Phoenix, Reno and Salt Lake City.

Hardiman noted how the Bobcats players have formed strong bonds among one another and are passionate to play.

“The craziness and the heart of this sport is you have to have heart and finding your way on the field and not being scared of someone who’s really literally trying to take your head off,” Bannon said. “We become different people.”