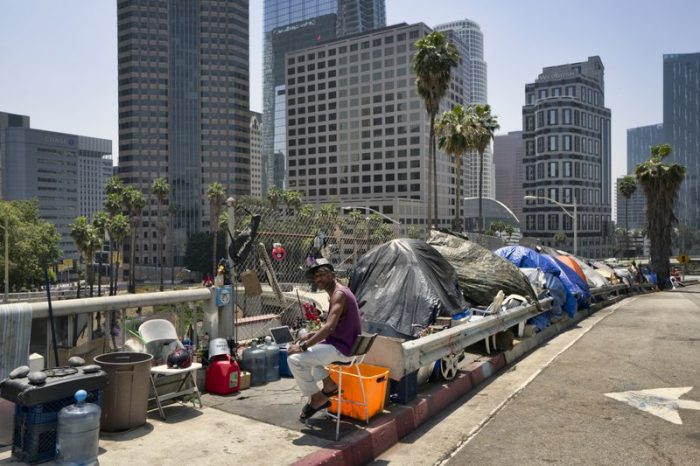 A homeless man sits at his street side tent along the Interstate 110 freeway along downtown Los Angeles’ skyline on Thursday, May 10, 2018. (AP Photo/Richard Vogel)

Homelessness in Los Angeles County spiked by 12% over the past year to reach an estimated 58,936 people, according to figures released today, with the region’s housing costs outpacing wages and forcing people onto the streets faster than authorities can find them shelter.

According to data released by the Los Angeles Homeless Services Authority, nearly three-quarters of homeless people are living in cars, tents, makeshift shelters or on the streets without any apparent cover from the elements.

“We have the largest unsheltered population in the nation and one of the largest homeless counts across America. Only New York has more people experiencing homelessness on any given night,” according to LAHSA executive director Peter Lynn.

The city of Los Angeles saw a 16% increase in its homelessness numbers.

County Supervisor Janice Hahn, who chairs the board, said she anticipated the rise given the increasing number of homeless encampments but called the outcome “very disappointing, very troubling, very sad,” particularly after a 4% drop in the numbers last year.

Though the number of chronically homeless individuals increased by 17%, demographers and statisticians responsible for the count said they believe the real issue is the influx of newly homeless people.

Phil Ansell, who runs the county’s Homeless Initiative, said it may seem counterintuitive, but “a booming economy can actually lead to an increase in homelessness.”

He said that in a growing economy, rental rates have outpaced wages, particularly for people living at the margins and earning minimum wage. A minimum-wage employee would have to work 79 hours a week at $13.25 per hour to afford the rent in an average one-bedroom apartment, according to LAHSA.

Los Angeles Mayor Eric Garcetti echoed that sentiment, calling the increase in homelessness “heartbreaking.” “These results remind us of a difficult truth: skyrocketing rents statewide and federal disinvestment in affordable housing, combined with an epidemic of untreated trauma and mental illness, is pushing people into homelessness faster than they can be lifted out,” he said.

The numbers are up despite tens of thousands of people who have moved off the streets and into permanent housing. In the last year alone, the county has helped 21,631 people find permanent homes, while another 27,080 who were homeless at some point during the year were able to lift themselves out of homelessness, according to the data.

The number of homeless veterans was roughly flat year-over-year, but there were 7% more homeless seniors — after a meaningful decrease last year — and demographers saw a 24% jump in homeless youth. Researchers from USC who worked on the count said they believe improved methodologies were responsible for part of the increase in young adults counted. 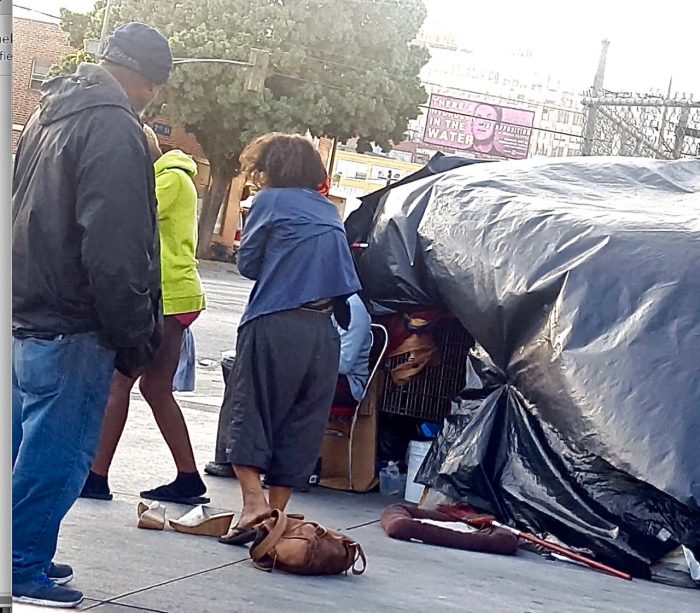 Though people suffering from serious mental illness or with substance abuse problems are among the most visible members of the homeless community, they make up just 29% of the total homeless population.

Black Angelenos are four times more likely to end up homeless, a finding consistent with data from earlier counts that Lynn attributed to “deep institutional racism in the culture.”

Latino residents make up nearly half of the county’s homeless population, but Supervisor Hilda Solis said she believes the number is much higher. “Latinos are undercounted as they are more likely to rely on their extended family and social networks and live in crowded households,” Solis said.

While the number of both sheltered and unsheltered homeless was up overall, most homeless families are in shelters or other bridge housing, according to LAHSA. Economic hardship was the number one reason cited by newly homeless individuals for their plight. The second most common trigger was a lack of a support network and a personal crisis like a divorce. And 5% of those represented in the overall count said they were fleeing domestic violence.

The county has more than doubled its capacity to house people over the last five years, in part due to voters’ 2017 approval of a quarter-cent sales tax increase under Measure H in 2017. In 2016, voters in the city of Los Angeles approved Measure HHH, which authorized a $1.2 billion bond to build about 10,000 units of supportive housing and provide other homeless services.

Without that funding, the crisis would be worse, officials insisted, pointing to a 43% increase in homelessness in Orange County, 50% in Kern County and 28% in Ventura County.  “Were it not for the passage of Measure H, the message that you’ve heard today would be much more startling,” Supervisor Mark Ridley-Thomas said.

“The picture would be a lot more bleak.” Within the county, the numbers varied widely, with the Westside showing the biggest spike of 19%, though from a smaller base. The largest increase was in Metro Los Angeles.

Ridley-Thomas, whose 2nd District had the biggest jump in homelessness, said the results were a symptom of income inequality in a region that is “the wealthiest in the nation and at the same time … the most impoverished.” Hahn noted that a study by the nonprofit California Housing Partnership Corporation estimates the county needs more than 500,000 affordable units to bring housing supply in line with demand from low-income residents.

Only 1,397 units are on track to be available in fiscal year 2019-20, according to LAHSA.  County officials have backed a bill to speed conversions of motels into supportive housing units and is considering housing homeless veterans at the Bob Hope Patriotic Hall downtown, among other local efforts to increase the amount of shelter space, bridge housing and permanent supportive housing units as quickly as possible.

The county has also put a 3% cap on rent increases in unincorporated areas. However, California voters rejected a 2018 proposal to give local governments more latitude to enact rent controls.

Ansell said the state can take action immediately on key issues that could help alleviate the problem, including pending legislation prohibiting rent gouging, evictions without cause and discrimination against renters with housing subsidies.

Supervisor Sheila Kuehl said the county can’t rely on the state. “It’s important for us to realize the county is pretty much in this all alone,” Kuehl said.  “We can talk about the state helping, but they’re failing us every week up there now.”

Los Angeles County officials said they are adding strategies geared at combating other economic factors. When the Board of Supervisors approved $460 million in 2019-20 Measure H spending on homelessness three weeks ago, it focused on finding ways to offset rising rental rates and to provide opportunities for steady employment through an employment task force and jobs training program.

But capacity constraints mean it will be some time before tent camps disappear and fewer people are forced to live in their cars.  “We have a long-term challenge ahead of us,” Lynn said.

He urged all Angelenos to join the United Way’s Everyone In campaign at www.everyoneinla.org and to advocate for policy changes and volunteer to help homeless individuals in their community. More information can be found at www.lahsa.org.

Supervisor Kathryn Barger said many of her constituents in the 5th District — which includes portions of the San Gabriel, San Fernando, Crescenta, Santa Clarita and Antelope valleys — “are frustrated because they don’t feel enough is being done,” despite the county’s investment of more than $700 million in Measure H dollars.

She urged her colleagues to consider solutions for people who aren’t interested in county services and seem committed to living rent-free, given the unsanitary conditions and disease risk posed by large homeless encampments.

Public health officials are struggling to keep pace with sewage and trash strewn through encampments and exacerbated by illegal commercial dumping. But homeless advocates warned officials of dire consequences of indiscriminate sweeps of encampments.

“Let’s take a little moment to remember Joe Reyes,” said Joanna Swan of the Services Not Sweeps Coalition. Reyes, who lived in a tent near Wilshire Boulevard and Normandie Avenue, died of a heart attack and community activists contend his heart medication was taken away during a sweep of his homeless encampment.

Each of the supervisors reiterated their commitment to resolving the homeless crisis.

Barger said predictive analytics will help identify solutions.  “We need to get to the root cause of this problem, “Barger said.  “In the interim, we will increase our focus on public health and mental health through effective outreach methods, particularly for the hardest-to-reach populations.”

Ridley-Thomas said it was the board’s job to remain focused. “There will be no retreat,” he said.