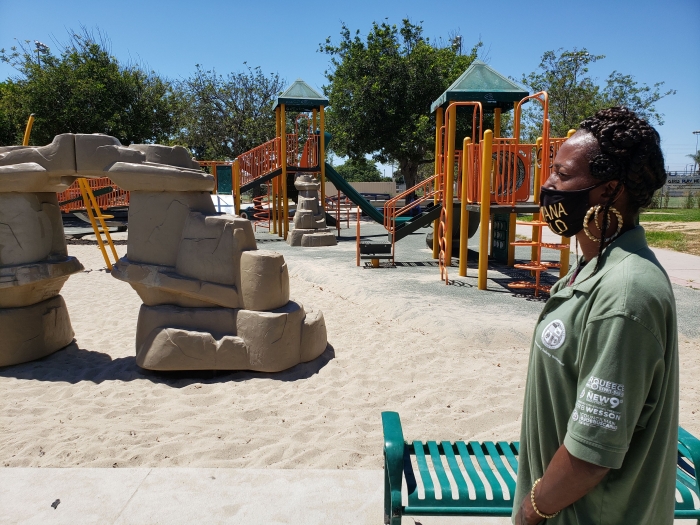 “Defund the police!” has been a rallying cry for protesters nationwide in the wake of the deaths of George Floyd, Breonna Taylor and Ahmaud Arbery.

Locally, an initiative called Safe Passage offers residents in South Los Angeles an opportunity to monitor their own communities with the full support of law enforcement.

The Safe Passage program employs local residents who patrol the interior and perimeter of 13 parks in South Los Angeles to ensure the safety of children and families.

“When incidents happen in South LA, the traditional way is to send in a bunch of officers,” said Councilman Harris-Dawson.  “The Safe Passages program is designed so that neighborhoods need police less and can be a part of their own solution.”

CBI Vice President of Intervention Services Leon Gullet administers the Safe Passage program.  Gullet has worked with youth outreach programs for over two decades and operates CBI’s contract for the City of L.A.’s Gang Reduction and Youth Development (GRYD) program.  Gullet originally developed CBI’s Safe Passage program to secure the safety of students traveling to and from school.  Safe Passage has served over 30,000 students and residents and has partnered with 24 schools.  The program was later expanded to include parks.

“Hiring people who know the neighborhood to oversee their own community is a strategy that works.  We’ve seen it in action,” said Gullet.

According to Harris-Dawson’s office, in 2019 violent crime decreased eight percent in and around the parks that had Safe Passage.

Tawana Caldwell was hired as lead CIW at Gilbert Lindsay Recreational Center, one of the parks included in the Safe Passage program.  A lifelong South L.A. resident, Caldwell grew up not far from the park and remembers going there as a child. She said that, in addition to being the “eyes and ears” and advocates for peace in the community, CIWs also mentor some of the young people who come to park.

“I have personally been available to a lot kids that just want to vent or share what they’re going through,” she said.  “Sometimes it’s important just to ask them how they’re doing.”

Local resident and CIW Victor Golden came to the Safe Passages program at Gilbert Lindsay Park after working with Project Save at Manual Arts High School and Carver Middle School.

He said he wanted to bring the same grab and go meal programs and other benefits that were available at Carver and Manuel Arts to his community.  Before the coronavirus shelter in place orders went into effect, food was distributed at the park five days per week.

“Working over there and seeing everything they were providing for the community, I thought, ’My community over here needs it as well.’ So I chose to come over here and get a food program started.”

“Safe Passage has always been one of Community Build’s flagship programs,” said CBI President and CEO Robert Sausedo.  “In a time of double-digit unemployment in the Black community, if we can maintain safety in the community while providing desperately need job opportunities, then it’s a win-win for everyone involved.”