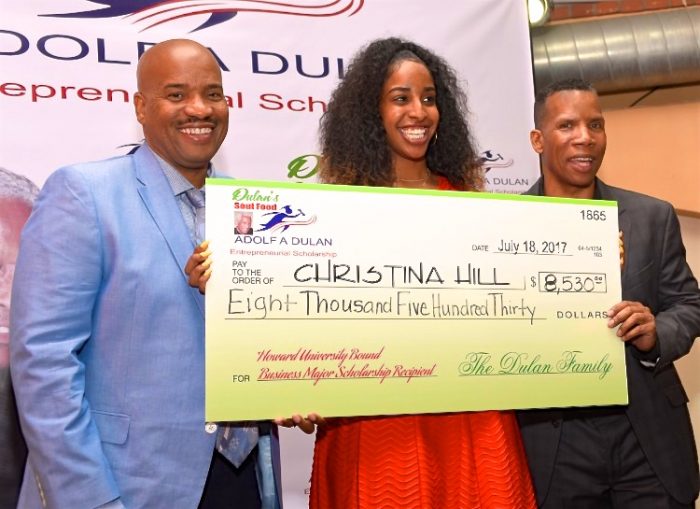 “I had a talk with my brother.  He told me to not give up on my dream. I thought about Mr. Dulan, being a Howard Alum and wondered if he knew anyone to help me. I called him and he told me to bring a letter of recommendation, transcript and resume. He explained to me he wanted to come up with a business scholarship in his dad’s name. After we spoke, he told me he wanted me to be the first recipient [of the Inaugural Adolf A. Dulan Scholarship],” Hill said.

The business-based scholarship is in memory of Dulan’s father, who reared his son in business and humanitarianism. The money wasn’t just handed to Hill, she had to work for it. Dulan gave Hill 150 tickets to sell for her own personal banquet dinner catered by him. All of the money she raised would go towards her scholarship.

“I basically had to market myself. I didn’t have to write an essay or anything, I just had to bring him a marketing plan on how I was going to conduct my banquet. In the end, I made $8,530.”

Hill was introduced to business and entrepreneurship when she hosted a party and saw how much money it pulled in. She then expanded her party business and started partnering her parties with small upcoming clothing brands. Along with throwing stellar parties, Hill worked at Chick-fil-a for two years while in high school. After graduation from Howard, Hill wants to own her own Chick-fil-a, to fill the void of Black woman owners in the chain. 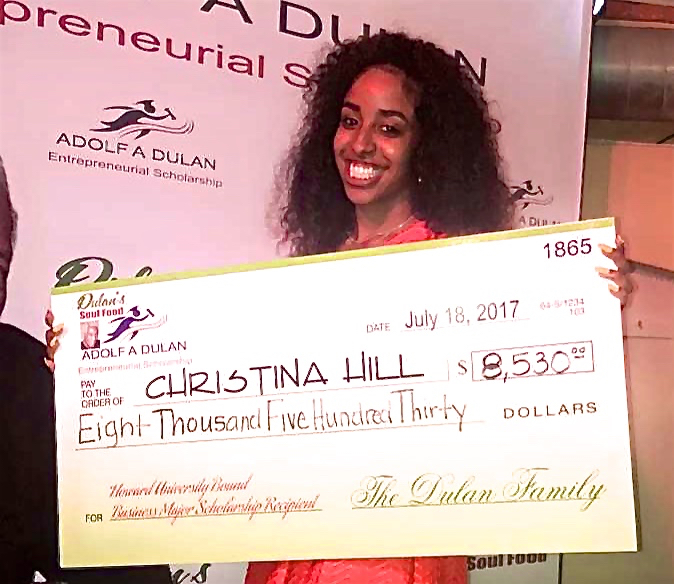 Hill’s interest in Howard began when her father took her to the Black College Expo when she was small. She won’t be at Howard alone, as her older brother is a Junior there.

“Mr. Dulan really taught me a lot. He taught me stuff that you can’t find in the textbook. I would work one-on-one with him almost three times a week. He would teach me how to run, own and conduct a successful business. He has taken me to Paramount Studios for a block party, to serve thousands of breast cancer survivors, and we were on the radio. To say we just met at a career fair, he is just a great mentor,” Hill said.

Without the Adolf A. Dulan Scholarship, Hill wouldn’t have been able to attend Howard. Through this scholarship process, Dulan not only fulfilled Hill’s collegiate dreams, he took her under his wings and taught her the in’s and out’s of owning a business.

The Dulan Family’s restaurants have serviced the South Los Angeles community for over 30 years.  The scholarship was given by the Dulan family through their restaurant businesses, which include Dulan’s on Crenshaw and Dulan’ s Soul Food Kitchen.  First generation owner, Adolf A. Dulan, passed away in May of 2017, but his memory lives on through this scholarship and his legacy as a businessman and community supporter.