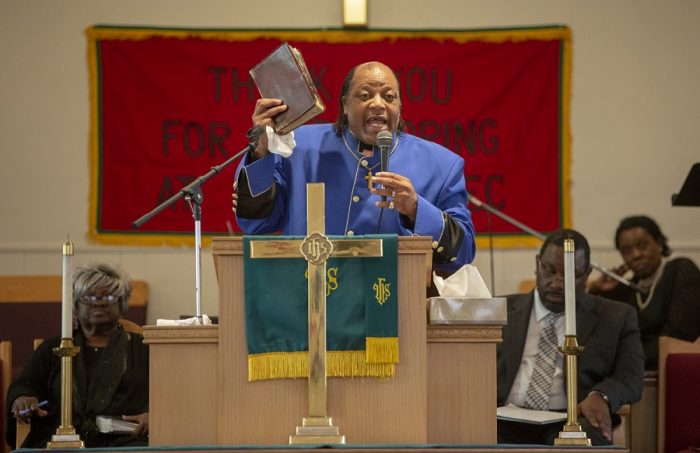 The church in the past has spoken against police killings of black men that have roiled the United States.

“God works through trials. If there’s no trial, no testing of your faith, you don’t know what you have,” said Stalling, an interim pastor at the church in Salt Lake City. “You have to go through something to understand who you are.”

He joined a pianist and two singers from Brigham Young University in leading churchgoers through several upbeat hymns.

“It’s about community. You’ve got to carry the church with you,” Stalling said.

Trinity formed in the 1880s with just a few families who raised the money to start a foundation for the building, said Lucinda Sampson, a member of the congregation.

“The church is slowly moving on,” she said last week at the A.M.E. Church building, which was erected in 1907.

The Rev. Nurjhan Blanch Govan, who recently retired but remains an interim pastor, said an exact founding date isn’t known, but the congregation is believed to be about 130 years old.

The church was established before Utah was admitted to the union as the 45th state in 1896. A crew broke ground on a previous A.M.E. church building in 1891.

Govan said the church is raising money to hire its own full-time musician and is hoping to secure financial support from Salt Lake City and various foundations to help ensure it’s there for generations to come.