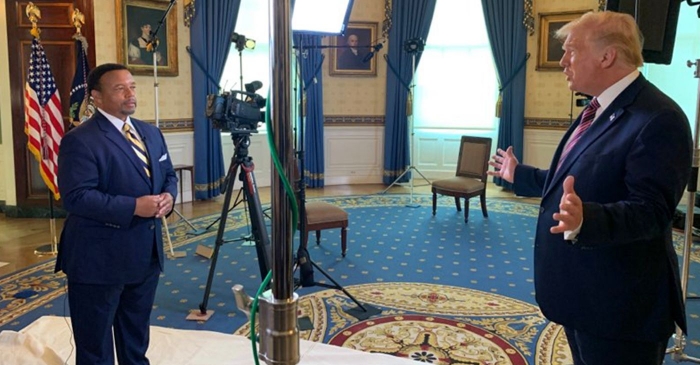 In a surprise, President Donald Trump sat down with the Black News Channel to discuss a wide range of topics, including the 2020 election, COVID-19, and the failed stimulus negotiations.

The interview conducted by anchor Kelly Wright was a watershed moment for the network, which debuted in February after several delays. It came one day after presumptive Democratic Presidential Nominee Joe Biden made history by selecting Sen. Kamala Harris (D-Calif.), a Black woman, as his running mate.

It not only marked Trump’s first time on the network but also his initial interview with any African American-owned media. The National Newspaper Publishers Association (NNPA), the trade association of 230 Black-owned newspapers and media companies that comprise the Black Press of America, has repeatedly requested interviews with the president throughout his nearly four years in office.

White House and Republican National Committee officials have not acted on the multiple requests from the Black Press of America seeking access to the president, Vice President Mike Pence, and Education Secretary Betsy Devos.

Wright, a seasoned and Emmy-winning journalist who once worked at Fox News, asked the president about the economy, COVID-19, and school choice.

Trump, savvy with his words, claimed that “most states are doing well.”

“Now, Florida is headed in a really good direction [with COVID-19], California and now Texas,” Trump declared to Wright. “I see where Germany got a big surge, France and Spain. But we’ve done a very good job.”

Heavily criticized for calling the coronavirus the “Wuhan Virus,” Trump repeatedly referred to China as the source of the pandemic. He said America’s economy, including in the African American community, was prospering before the pandemic, claims that don’t exactly match with various economists.

The president claimed that Biden and Harris would raise “everybody’s taxes and crash the [stock] market.” He referred to Biden as a “puppet,” and called the Green New Deal championed by former Democratic Presidential Candidate Bernie Sanders a “disaster” and a “cartoon joke.”

Wright asked Trump about underserved communities, particularly African Americans, and the president declared that he’d done much to improve the lot of all minorities.

“We’ve done Opportunity Zones, Criminal Justice Reform, and I saved HBCUs,” Trump exclaimed. “We gave them more money than they were seeking. Just before the virus came from China, the Black community had the best unemployment and employment numbers in history. They had a good month last month, they had the best numbers, and then we got hit with the China virus.”

Since the pandemic began in March, more than 50 million Americans have filed for unemployment compensation. The Republicans have sought to lower benefits for the unemployed, which has remained a sticking point in any potential bipartisan agreement to provide relief.

The president also reiterated his stand that all schools should reopen this fall for in-person learning despite more than 5.2 million Americans reporting having contracted the virus with at least 165,000 deaths.

When Wright asked Trump about his concern for children, the president demurred.

“They don’t get sick,” he said, despite numerous reported cases since some students returned to school.

“If you are elderly, have a bad heart or a problem with diabetes or something … children don’t get it. The mortality rate is almost non-existent in young people,” Trump stated. “Their system is a little bit different.”

Wright also asked Trump about his decision to send federal agents into Portland and other cities where the president claimed that there “are some hard-core anarchists and agitators at the highest level.”

When asked how he plans to help heal the nation, Trump said success would accomplish that job. “We were there, and then China sent that virus,” Trump said. “I was starting to get along with Democrats that no one spoke to. We were there, and the jobs numbers for every community was doing great. But the plague came from China. Success will bring us together.

Californians Can Get $300 Extra a Week in Unemployment Benefits — for...
Metrolink To Offer Free Weekend Tickets to Children Starting Saturday