It not only marked Trump’s first time on the network but also his initial interview with any African American-owned media. The National Newspaper Publishers Association (NNPA), the trade association of 230 Black-owned newspapers and media companies that comprise the Black Press of America, has repeatedly requested interviews with the president throughout his nearly four years in office. ... read more »
FTC announces record $191M settlement against University of Phoenix

The University of Phoenix (UOP), one of the nation’s largest for-profit colleges will pay a record $191 million settlement to resolve charges stemming from a five-year investigation by the Federal Trade Commission (FTC). On December 10, Andrew Smith, Director of FTC’s Bureau of Consumer Protection noted it was the largest settlement the Commission has obtained in a case against a for-profit school. ... read more »
Regulatory Rollback on Student Loans Takes Away Borrower Protections

Every Fourth of July celebrates this nation’s founding. But this year, only a few days before the annual freedom celebration, an ill-advised governmental action will financially doom rather than free millions of student loan borrowers – as of July 1. Moreover, this action arrives as the cost of higher education continues to soar and household incomes remain largely stagnant. ... read more »
ADVERTISEMENT
Betsy Devos’ $5 Billion Giveaway to For-Profit Colleges: Deregulation of Student Loans

Today’s increasingly competitive global economy requires and recruits those who are highly-skilled and knowledgeable. People understand and accept that higher education is a means to become employable, marketable, and competitive. ... read more »
Waters Introduces Bill to Ensure Student Civil Rights are Protected by Betsy DeVos 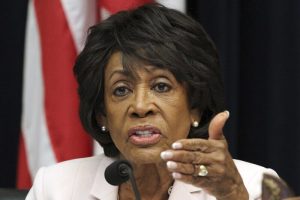 Congresswoman Maxine Waters (D-CA), Ranking Member of the House Financial Services Committee, introduced H.R. 6537, the Education Department Civil Rights Transparency Act, which will increase transparency in investigations conducted by the Department of Education’s Office of Civil Rights in order to ensure that students’ civil rights are protected. ... read more »
State AGs to DeVos: Work with, Not Against, State Law Enforcement

Starting last summer, student loan servicers like Navient have been lobbying DeVos to shield them from liability for their practices. And it’s worked. Despite objections from a bi-partisan group of Attorneys General (AGs), the National Association of Governors, and the Conference of State Bank Supervisors, DeVos and the Department of Education have increasingly made it more difficult for state and federal law enforcement agencies to do their jobs by retracting information sharing agreements with the Consumer Financial Protection Bureau (CFPB) and instructing servicers not share student loan information with state law enforcement and banking supervisors. ... read more »
ADVERTISEMENT
Videos
WATCH: THE HISTORY OF THE HARLEM RENAISSANCE