It not only marked Trump’s first time on the network but also his initial interview with any African American-owned media. The National Newspaper Publishers Association (NNPA), the trade association of 230 Black-owned newspapers and media companies that comprise the Black Press of America, has repeatedly requested interviews with the president throughout his nearly four years in office. ... read more »
‘Hidden Figure’ Katherine Johnson Turns 101 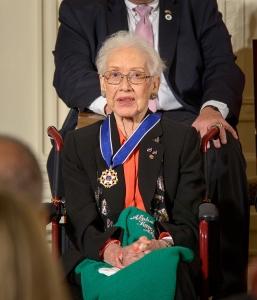