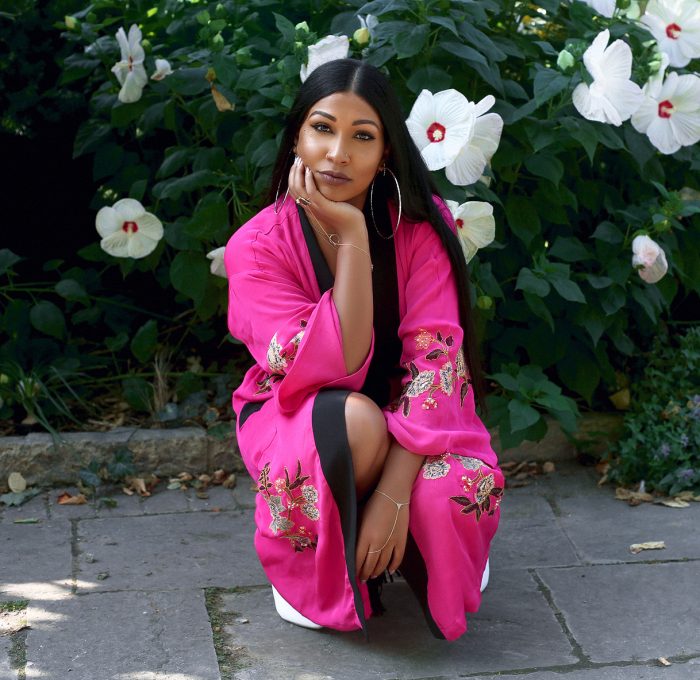 In 2009, Melanie Fiona released her debut single “Give It to Me Right,” which became the staple R&B song for all women who were in relationships or leaving from a romantic relationship. Nine years later, Fiona is still producing some of the greatest R&B hits. However this time, she is sharing her music with 350,000 people on the Hyundai Soundstage during the 13th annual Taste of Soul Family Festival.

Fiona is not new to the Taste of Soul festival. In fact, she headlined the StarQuest stage last year which was sponsored by Hyundai. So what brings her back? The people, the food, and the cause.

“We’ll my wonderful relationship with friends at Hyundai reached out and asked me to be a part of [the Taste of Soul],” she said.

Fiona’s relationship with Hyundai dates back to 2015, when she was asked to be the celebrity hope ambassador for company’s organization Hope on Wheels, which focuses on research for childhood cancer.

“Also, living in L.A. and feeling like it is my new home away from home, it feels like the right thing to do for the community, to be there and support what’s happening in Los Angeles and support where you are from and just this beautiful gathering of music, food, and the community for a positive reason. The [Taste of Soul is] all things good and that’s all I really want to be doing with my time and my talent is really just putting it into efforts and any events that are doing positive things and effecting people’s lives for the better,” she said.

Fiona’s performance on the Hyundai Soundstage will show the evolution of her music and growth as an artist. Fans can expect to dance and sing-a-long to hits from her first two albums like “It Kills Me,” “4AM,” “Give it To Me Right,” “Fool For You” as well as new music from her third album.

“It’s nice to be able to have a show that encompasses all the music that I have created from the beginning of my career and to know that people have been with me on that journey and that they are familiar with the songs. It makes it a lot more fun to get up there and have people singing-a-long with me,” said Fiona.

Aside from performing at the Taste of Soul, Fiona is also looking forward to trying delicious new food.

“Just the food and all the different stands, places, people and the community that make delicious food and products with love and being able to support them,” she said. “Last year one of my band members brought me back a plate of food. I don’t even know what stand it came from but it was like a gift from God. I was just so happy with the mac and cheese and the greens. Wherever they came from, God bless the person who made it.”

Additionally, Fiona is also excited to be sharing the stage with other performers included in the Hyundai Soundstage lineup like: Teddy Riley, Blackstreet, Chante Moore, Kurtis Blow, and Ginuwine.

“I met a few of these people along the way but this is kind of a concert for me to because I grew up listening to some of these artists like Chante Moore and Ginuwine. Being a young girl, that was the R&B I grew up on so I think it’s kind of cool that we are blending the times of music that I make and also music that I grew up listening to and that also inspired me,” she said. “It is really an honor to be around people who are performing and have had such a long career. It is really inspiring to see that and its R&B music, like R&B music is the best!”

One thing fans may not know about Fiona that she shared with the LA Sentinel is the fact that she is great at jump roping.

“I grew up playing basketball, running track, and jumping rope, so I am a bit of a tomboy at heart and I think people can kind of see that from my style,” she said.

Although Fiona grew up playing sports she also developed a passion for being a singing nurse, a phrase that she uses in her philanthropic work.

“The singing nurse is something that I am kind of owning as my character and a part of who I want to be known as and known for,” said Fiona. “I really just want to be able to heal people through music and I think that that’s what the 4-year-old version of myself was identifying with. Music for me has always been this emotional and sentimental thing for me and now that I have become an artist and a performing artist, I have been able to see how the music that I sing and write, effects people in a positive way and brings people together.”

Aside from being a singing nurse, Fiona also wanted to grow up to be like her mother and that dream came true when Fiona became a mother herself. Currently, Fiona is working on a multitude of projects which involves working on new music, posting content to her motherhood blog and interviewing influential people in her life on her YouTube series, “Living Awake.”

“I am just passionate about things that affect girls and women and so everything that I have been doing recently has been about that,” she said. “I recently led a women’s meditation and I led a guided meditation for young girls in New York recently as a part of my singing nurse philanthropic efforts. It’s about giving back and creating a space for women to feel safe and to connect with one another in a positive way.”

According to Fiona, the key to juggling work life and motherhood is all about balance.

“My only focus now, for whatever it is I am creating whether it’s music, content for being a mother, or a working artist, or just a women, anything that I lend my voice and my cause to has to be about healing people and really creating the conversation and vulnerability which I think leads to healing.”

Currently, Melanie Fiona is working on her album which is said to “touch the soul” which is exactly what her performance on the Hyundai Soundstage will do on Saturday, October 20.