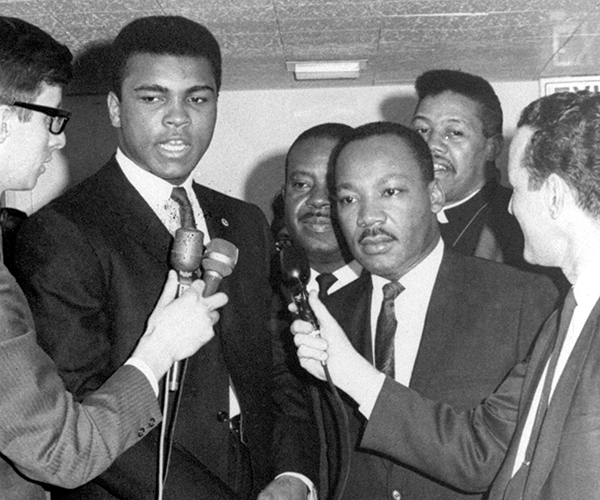 FILE – In this March 29, 1967, file photo, heavyweight champion Muhammad Ali, center left, and Dr. Martin Luther King speak to reporters. Ali, the magnificent heavyweight champion whose fast fists and irrepressible personality transcended sports and captivated the world, has died according to a statement released by his family Friday, June 3, 2016. He was 74. (AP Photo/File)

Muhammad Ali, also known as “The Greatest,” had several interactions with Martin Luther King. Initially, they did not share the same views, but they grew to support each other.

King did not initially agree with the then Cassius Clay converting to Islam, and then renaming himself Cassius X, according to the biography “King of the World” by David Remnick.

“When Cassius Clay joined the Black Muslims and started calling himself Cassius X he became a champion of racial segregation and that is what we are fighting against,” King said.

Ali, along with the Nation of Islam, did not support King’s methods of non-violent protests and integration, according to Paste Magazine.

Yet, King and Ali would have similar views on the Vietnam War. In 1967, King publicly told of his disagreement with the war. When asked about his focus on the issue, King quoted Ali in response, the Independent reports.

“Like Muhammad Ali puts it, we are all – Black and Brown and poor – victims of the same system of oppression,” King said.

King also supported Ali’s ardent refusal of the draft for the Vietnam War.

“No matter what you think of Mr. Muhammad Ali’s religion, you certainly have to admire his courage,” King said, according to Paste Magazine.

Although they did not agree in some issues, King and Ali would become allies. The FBI overheard a phone call between the two historic icons. King was congratulating Ali on his boxing and Ali warned King to “watch out for them Whities,” the biography states.

Ali sent a telegraph of support to King in 1967 when he was put in jail. King was arrested in Birmingham, AL for not getting a parade permit for the March on Washington in 1963.  The message was sent from Chicago, saying “Hope that you are comfortable not suffering,” according to The Post Game.

King and Ali had diverse, yet successful approaches to gaining civil rights. The two icons will always be remembered for their hard work, impactful statements, and society-changing sacrifice.