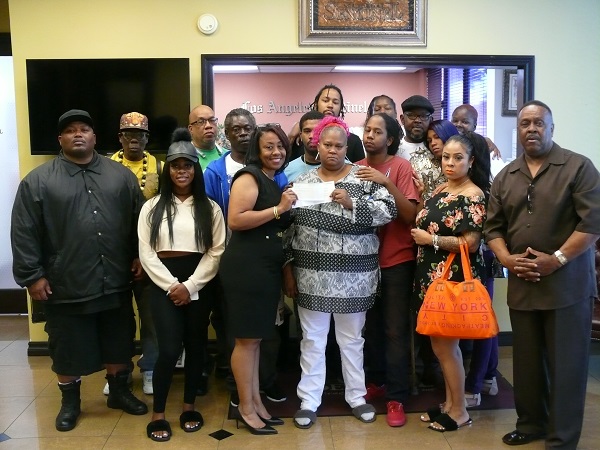 Samantha Mays was thankful for the financial donation she received from gang prevention advocates, but she appeared more grateful and relieved that she could speak the truth about her 15-year-old daughter gunned down right before her eyes.

According to Mays, some Los Angeles Police Department officers treated her horribly right after the shooting.

“I was hurt.  The police department, not all of them – some of them – were really nice to me.  But they took my baby. They didn’t tell me ’til 25 minutes later what hospital she was going to.  They told me to move out the way, that I was in a crime scene, and the crime was where I was standing with my daughter,” said Mays.

“Our last words shouldn’t be from my sister, ‘I got shot, mama.  It burns,’ ” said Bells’s brother.

The mother and daughter were at The Best Burger near 78th St. and Western, buying dinner so Bellcould take her insulin shot, Mays said.  She said she blames herself for the death at times, because Bell wanted Jack in the Box, but she decided on the burger stand.  Family members assured her otherwise.

When Mays heard the shots, she thought it was a drive by and threw her daughter on the ground and covered her for protection, but it was too late.  Bell was struck, but Mays didn’t know it because there was no blood, she said.

She said she’s heard multiple media reports of Bell being shot three to six times, but her child was shot in the side, the hole was no bigger than shirt button.

“It was no blood on the scene nowhere.  I knew it was bad … I was just trying my best to be positive,” Mays stated.

During an exclusive press conference at the Los Angeles Sentinel Newspaper on May 4, Mays said she has not had time to stop and process everything, because she’s keeping Hannah’s name in the public in hopes the hooded person who shot her on April 29, or anyone with answers comes forward. 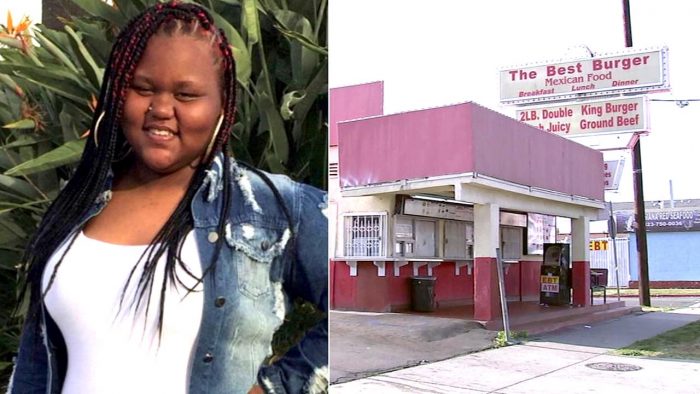 Hannah Bell, 15, was shot in cold blood while out eating with her mother. (courtesy photo)

Police say they don’t believe Bell was involved in a gang, according to media reports, and they are investigating whether she or a man standing near them was the intended target.

“I have talked to other parents and they said the same thing happened to them with the ambulance and the police department, using everything as a crime, and not letting me kiss her,” said Mays.

“Somebody took my child, killed her, on the scene, shot her, and then on top of that, the ambulance and the police department snatched her out of my hands, not giving me a chance to tell my baby to hold on, how much I love her, how much her family needs her,” lamented Mays.

“Ya’ll just ripped everything from me.  I lost everything! Everything and I’m tired of it!   I’m tired of them putting such negative statements and not having no compassion … How would you feel if you was there and they tell you can’t be next to them,” she asked.

Mays alleged that after her child had passed away in her absence, she was told she could kiss her at the funeral home, because she’s evidence.

“The man didn’t come up and fight her!  She didn’t have no evidence up under her nails!  You took her.  She just got hurt, and then on top of that y’all come and take her and then throw me out of the crime scene, where I’m at, where the crime happened against me!  And you treat me like a criminal,” cried Mays as she pounded her hands against her chest.

The truth about Hannah

According to Mays, media has been reporting lies, such as her daughter was involved in gangs.  She also alleged that police have asked her schoolmates if Bell was a prostitute.

The truth about Bell is that she was respectfully feisty, hated gangs and drugs, and wanted to be a model, her mother and family shared.  “She was the best auntie in the world,” said one brother.

She loved to dye her hair, just like her family. She was also excited about having a quinceañera (Spanish girl’s ‘sweet 15’ celebration).  She was smart and hated bullies, they continued.

The Los Angeles City Council adopted District 8 representative Marqueece Harris-Dawson’s motion for a $50,000 reward.  During a May 4 press conference at the Sentinel, the Stop the Violence Increase the Peace Foundation presented Ms. Mays with a $500 donation.

“My prayers go out to you,” said Lawanda Monroe, the foundation’s director.

“While intervention is important, an ounce of prevention is worth a ton of cure,” said Ms. Monroe.

At press time, no funeral arrangements had been made.