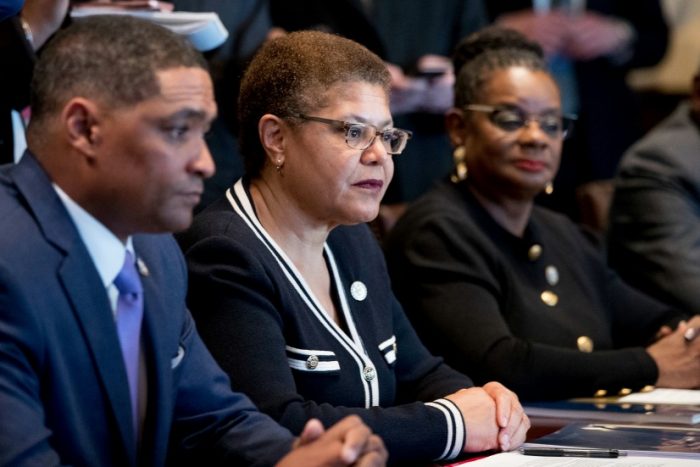 The contentious relationship between the CBC members and the Trump administration began in January when CBC member and Civil Rights Leader Rep. John Lewis said what 3 million plus Hillary voters were thinking on NBC’s “Meet the Press,” that he didn’t see Trump as a legitimate president and would not be attending the inauguration.

Next, Rep. Lewis, Congressional Black Caucus chairman Cedric Richmond and Senator Corey Booker all testified against Jeff Sessions nomination for US Attorney General, in hearings to no success. However, Rep. Lewis made sure we were reminded of Sessions anti civil rights tenure.

Rep. Maxine Waters echoed the sentiments as she continues to press Trump’s legitimacy by staying focused on the now growing Trump/Russia alleged collusion, which is proving to be full of smoking guns and hidden truths. Waters has been a leading member in Congress at large on the push for news conversations, and congressional investigations. Rep. Waters a champion for the resistance movement has even created a social media trending hashtag #KermlinKlan with photo included. 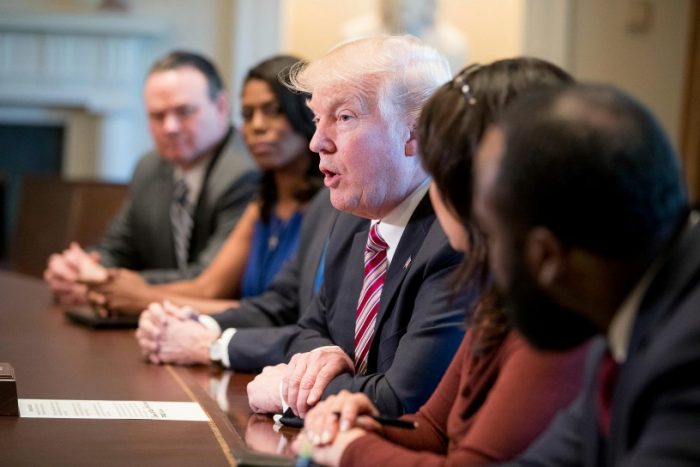 President Donald Trump meets with members of the Congressional Black Caucus in the Cabinet Room of the White House in Washington, Wednesday, March 22, 2017. (AP Photo/Andrew Harnik)

While these two outspoken CBC members stood their ground in February, Whitehouse correspondent April D. Ryan exposed the president of his lack of knowledge of the Congressional Black Caucus when she asked Trump about the CBC during an unusual Whitehouse press conference, Trump had called. With embarrassment Trump blurted out a request for Ryan a reporter to set up the meeting with the group. Then he referenced a canceled meeting with CBC member Rep. Elijah Cummings to save face, but too much of Trumps lies Rep. Cummings said no such meeting was scheduled.

Weeks later that meeting did take place in early March between Rep. Cummings with Cummings saying his focus to meet with the president would be regarding negotiation of drug prices under Medicare and giving U.S. consumers access to Canadian prescription drug imports, two campaign-trail promises of Trump’s. During the meeting, Rep. Cummings took the time to inform Trump that his language describing African-American communities has been “hurtful” and “insulting,” and suggested the administration look into allegations of voter suppression as well as election fraud. With Cummings giving Trump the benefit of the doubt of not having anyone around him to point out these matters. 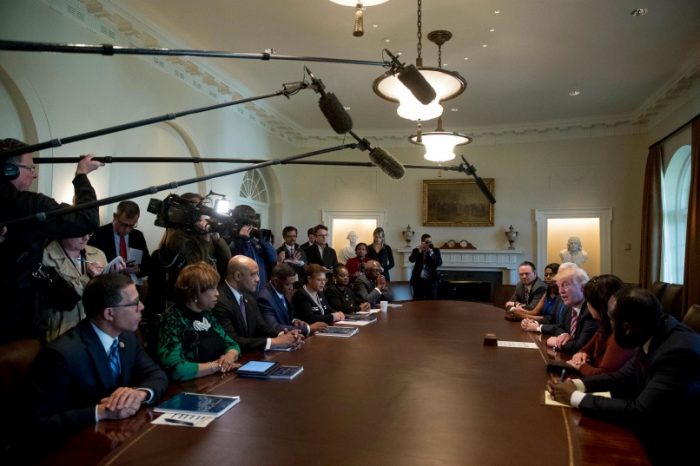 Last week as the Healthcare Repeal and Replace debate was hot on the burners, the Congressional Black Caucus finally had a formal meeting with Trump to discuss black issues and responded to Trump’s famous and controversial plea to black folks, “What do you have to lose.” Well during the meeting, the CBC responded with a 130-page policy memo titled in response to Trump’s campaign question: “We Have a Lot to Lose.” CBC attendees included Rep. Cedric Richmond of Louisiana, the CBC’s chairman, Reps. Karen Bass of California, Gwen Moore of Wisconsin, Brenda Lawrence of Michigan, Andre Carson of Indiana and Anthony G. Brown of Maryland.

Rep. Karen Bass Second Vice-Chair for the Congressional Black Caucus stated, “the purpose of the meeting, which I think we made very clear, was to answer his question about what our community has to lose,” Rep. Bass said after the meeting. “It’s his budget, it’s his policy, it’s his rhetoric; all of these factors demonstrate what we stand to lose and in some cases, what we’ve already begun to lose in the first fifty days of his administration.”

She continued, “We provided the President and Vice-President with very specific and detailed policy proposals that they are capable of carrying out, should the administration choose to do so. Making sure that the Second Chance Act, a law designed to provide programs that help people leaving prison, is fully funded in his budget would be a terrific first step,” she said. “There’s a lot of work to be done to be smarter on crime and to be smarter on re-entry. This was an opportunity to both express concerns about things the President has said in his remarks about the Black community, but also a time to see if there are areas of agreement where there are real solutions that can be put forward.”  To read the memo in its entirety click here http://cbc.house.gov/sites/congressionalblackcaucus.house.gov/files/2017.03.22_CBC_We_Have_A_Lot_To_Lose_v5.pdf.

In other CBC news, the Caucus has sent a letter to the Department of Justice requesting that the FBI investigate a string of missing person cases in Washington, D.C. involving black and latina girls. Thanks to urban media outlets, this inner-city mystery and concern is slowly being brought to national attention.

DC City Councilmember Trayon White told HLN’s Michaela Pereira in an interview, “What the community is alarmed about — we had a 10-year-old girl missing the other day, but there was no amber alert,” White said. “We just feel like, you know, if this was a white person or from another neighborhood, there would be more alarm about it.”

The letter was sent by Congressional Black Caucus chairman Cedric Richmond, D-La., and Del. Eleanor Holmes Norton, who represents the District in Congress. They called on Department of Justice, Attorney General Jeff Sessions and FBI Director James Comey to “devote the resources necessary to determine whether these developments are an anomaly or whether they are indicative of an underlying trend that must be addressed.”

According to The National Crime Information Center, there are approximately 170,899 missing Black children under 18 in the United States, more than any other category except for the white/Hispanic combined number of 264,443.