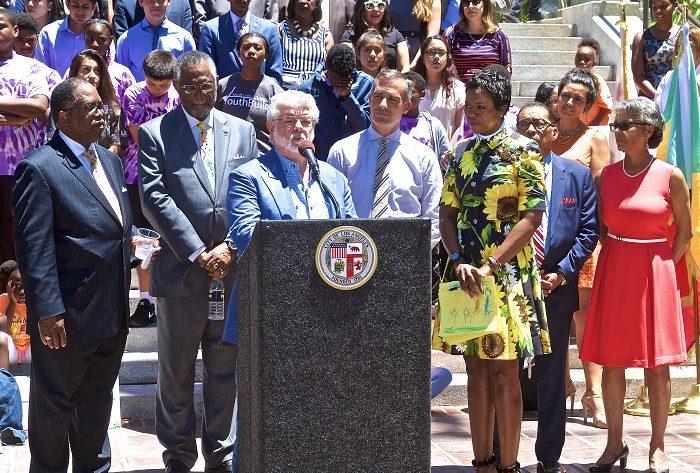 Legendary filmmaker George Lucas who introduced movie lovers to Star Wars and Indiana Jones, along with his wife Mellody Hobson, received overwhelming approval from the Los Angeles City Council for the construction of the Lucas Museum of Narrative Art (LMNA).

The state-of-the-art cultural institution will be fully funded by the Lucas family which is estimated at over 1.2 billion dollars for construction and operating endowment with no cost to taxpayers, making LMNA one of the largest gifts given to an American City.

Los Angeles Mayor Eric Garcetti is excited for what is to come and thanks the Lucas family for choosing the City of the Angels. 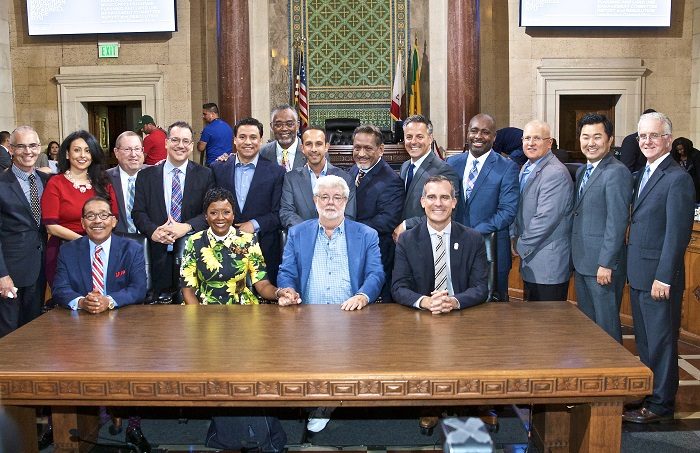 “We are a city where the best creators in the world want to come and paint on our canvas,” said LA Mayor Eric Garcetti. “We make history together because of the generosity of this family who understands what giving back is all about. I just want to say thank you for what you are doing for us and for this world. Thank you for bringing that vision as you have always done to touch our lives and thank you for choosing Los Angeles.”

The non-profit museum will be located in the heart of South L.A. in the ninth district at Exposition Park along Vermont Blvd., bordering Martin Luther King Jr. Blvd. and Jesse Brewer Park. The site where the museum will be built is surrounded by more than 100 K-12 schools and will offer public lectures, classes for all ages, hands-on workshops, after school programs and camps as well as additional educational opportunities will be available at the building.

Other museum amenities include: two state-of-the-art cinema theatres, an education center with hands-on and digital classrooms, a public research library, a café and restaurant, and a museum store.

She goes on to express her and her husband’s vision for the museum.

“We have a commitment to education in the Lucas family,” she said. “One of the things I said about this museum is that it is a school for schools. It’s not just a museum, it is a place [for] not only students and children and adults but schools and academics. People will come from all over the world to learn and ultimately thousands and tens of thousands and hundreds of thousands will be served from this one building and all of the neighboring areas.”

The Lucas family believes the museum will be a place where art and history will have a strong presence in Los Angeles.

“The goal of the museum is to inspire people to think outside the box and imagine whatever you want to imagine, to help build in the midst of our city and our people together and that’s what I am hoping we are able to do here,”  George Lucas said.

Councilmember Price believes this venture will be an exciting project for the new ninth district. 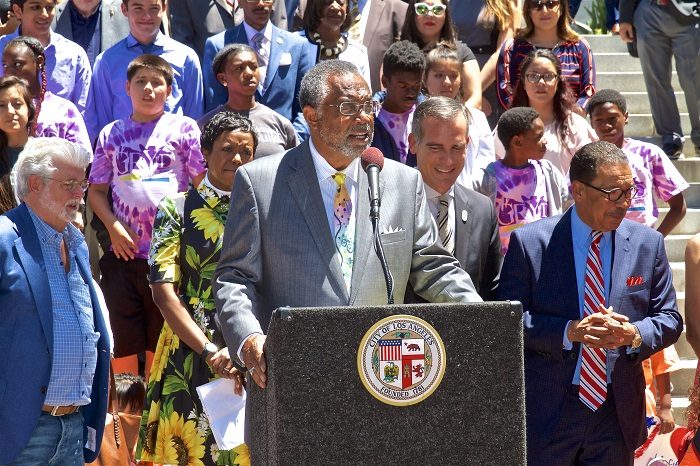 Councilmember Curren Price gives his remarks at the press conference after L.A. City Council approves the construction of the Lucas Museum for Narrative Art. (Photo by Mesiyah McGinnis/ LA Sentinel)

“This is certainly going to provide another jewel for our crown here in Exposition Park. We understand and appreciate the importance of the arts and our kids in our community,” said Price.

Next on the horizon for the new ninth involves recreational space, new housing, and commercial retail development opportunities. Overall, Price is excited to see South L.A. flourish like other parts of the city are doing by making sure that there are opportunities for the citizens who live here.

The completion date for the LMNA has not been released however, Price is in hopes that the project will break ground this year. For more information on project please visit www.lucasmuseum.org