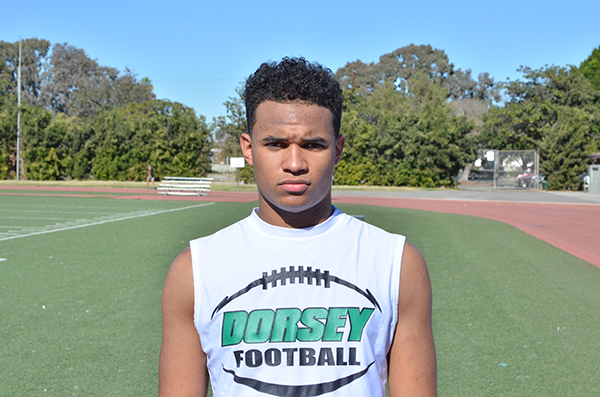 High School Junior Logan Bush has been a member of the defensive line for Dorsey’s football team this season. While competing for the varsity squad, he studies Advance Placement (AP) U.S. History while maintaining a 3.5 GPA.

His history class gave him more insight on the slavery era in American history.

“[I learned] more about slavery and what we didn’t know,” Bush said. “What’s hidden from us rather than what’s given.”

In order to maintain a balanced life as a student athlete, Logan utilizes his free time at school in a productive fashion.

“If you start on your homework early, like during lunch or nutrition, you get the rest of your night free,” he said. “You’ll be way happier.”

The Dorsey Dons showed heart facing what Bush called “the toughest schedule in Southern California,” competing against the likes of Serra of Gardena and St. John Bosco early in their season. Through the tribulations, Bush found his younger brother, Luke, to be his motivating force.

“He follows my footsteps, everything that I do,” Bush said. “I have to set a good example for him.”

He noted how the Dons were able to persevere and thrive through their tough season.  A pivotal moment for Dorsey was their matchup against Culver City.

“Through that adversity, we overcame it and found out what happened and what we can do,” Bush said. “When we played the Culver City game, how we fought through it, through the adversity and the difficult times.”

The Dorsey defensive line was quicker compared to their opponents, according to Bush.

“We’re a lot smaller than [other teams], but we’re a lot faster also,” Bush said. “With them being bigger, they’re slower, so we just have to use our lower body strength to go up against them.”

Bush also plays baseball. Playing football helps Bush with his agility, while baseball helps him with focusing. The dual-sport athlete noted how his English class, taught by Ms. North, has assisted him with football.

“She teaches us life lessons and what we could use [on] the football field and actual real life too,” Bush said.

“I used to go to their practices when I was younger and used to help coach my older cousin,” Bush said.

Coaches have taught him the importance of persevering and finishing his personal assignments.

When asked about the best advice he received from a coach, Bush said, “continue after the whistle is blown, Just keep going, don’t stop.”

Bush does hope to continue to play football, but he also aspires to be a chiropractor and medical doctor.

The Dons finished the season with a 7-7 overall record and a 4-1 record in the Coliseum league. Dorsey made their second consecutive City Section Championship game appearance, but fell to San Fernando 21-28.

“We started off kind of slow, but we grew as a team and crafted a great bond between each other,” Bush said. “I knew what the legacy was at Dorsey high school because I always been around it since I was a younger kid.”

Do you know an academically savvy athlete who is involved in different organizations? Please contact [email protected] to nominate them as Student Athlete of the Week.