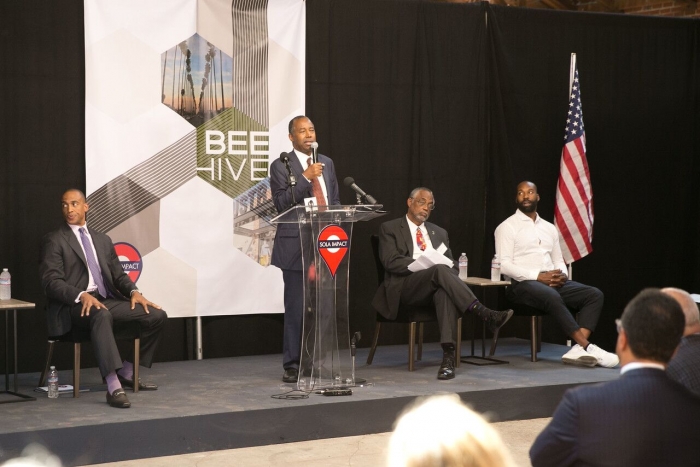 Dr. Ben Carson sharing with the attendees his support in The Beehive (Courtesy Photo: Sola Impact)

Wednesday, September 18, South Central opened its’ arms to The Beehive, the nation’s first-ever business campus for opportunity-zone (OZ) operated businesses. Here, some of the nation’s most underprivileged will now have to opportunity to meet and work with investors, business owners, and more under one roof.

The launch was announced by Sola Impact, a family of real-estate funds with high regard for creating social impact in South Los Angeles. Known mostly for revamping multi-family affordable housing units, The Beehive will be the organization’s first venture outside of its roots in housing.

The Beehive will offer a mix of work and social spaces, as well as inviting play spaces including coffee and lunch options. The decor will make for an easy transition for desk to comfort settings, both indoors and outdoor. The campus will also include a Reverse Greenhouse, an airy, light-filled glass structure fit for communal purposes. 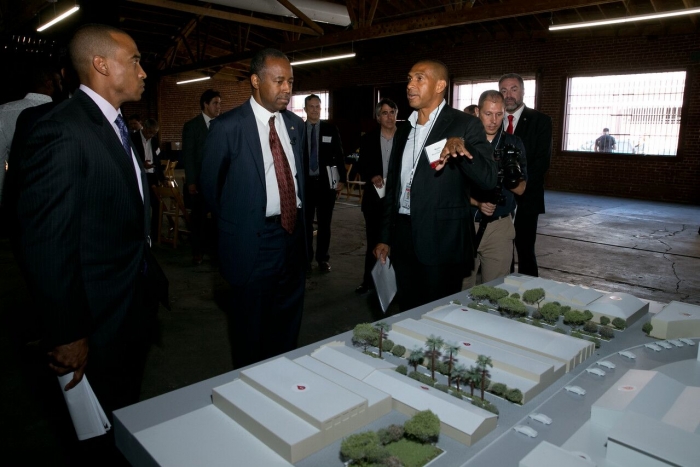 Founder of Sola Impact, Martin Muoto welcomed the crowd of over 50 community and civic leaders, business owners, and more to the future grounds for a brief presentation and luncheon.

“We hope that the next Snapchat, Spotify, or Lyft comes from South LA,” Muoto said. “We want to ensure that the companies that make this their home, also make this their community as well. We want to make sure that our commercial tenants reflect the true commitment to South LA.”

Located in the historic Goodyear District, The Beehive will make history as a co-working space and creative office with shared amenities designed to help boost innovative entrepreneurs, local businesses and startups. Near both Downtown Los Angeles and multiple historic intersections and landmarks of South Central, the campus will bridge the gap and connect both worlds. 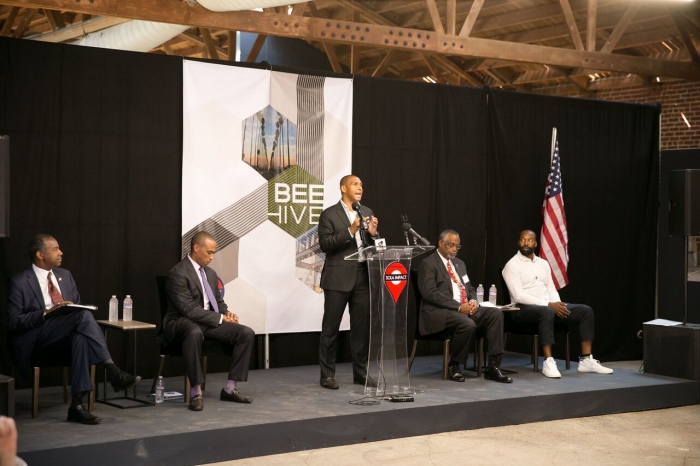 Along with Muoto, Secretary of Housing and Urban Development, Ben Carson, Sola Impact co-founder, Gray Lusk, Executive Director of the White House Opportunity and Revitalization Council, Scott Turner, Councilmember Curren Price, and former NBA Player and philanthropist, Baron Davis were in attendance to uphold the promise put forth by Sola Impact and The Beehive.

Dr. Carson spoke of his excitement surrounding the arrival and launch of The Beehive, stating Sola Impact is changing lives and thinking of the people.

“It’s wonderful to be in South Central this morning and witness the incredible growth and development that is taking place here,” Dr. Carson stated.

“‘Collective impact’ is certainly an appropriate word for today. When a community is able to come together and produce great works, bold ambition recognizing that the whole is better than some,” Dr. Carson added. “These extremely positive regulatory steps are bringing business communities and local communities closer together, maximizing not just opportunity but unity as well.” 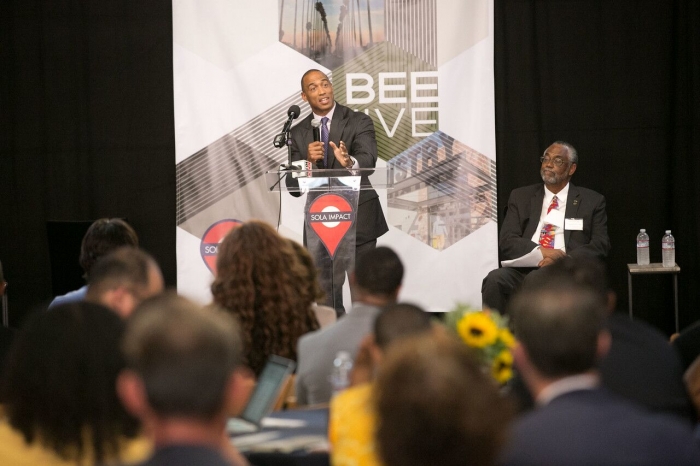 Both Dr. Carson and Scott Turner’s support of opportunity zones proved to be true as they shared their hopes for the future. The Beehive is believed to have an influence far beyond Los Angeles with legislation aiding opportunity zones and the effort put forth by Sola Impact, this is said to be a blueprint for change.

“This is a mission. This is an initiative, that is aimed at longterm sustainability. Aimed to have a revolutionary transformation, generational impact on the United States of America,” Turner stated.

Their alignment with the project, along with the support of community leaders like Baron Davis who shared a testimony, explaining his quest for a philanthropic venture was met upon hearing of The Beehive.

“Had I of had the resources, The Beehive, the opportunity, the zone to protect me, I probably would be a lot better today,” Davis says. Excited to be along on the journey, Davis explains this is the perfect way to return to the city that made him.

Muoto and everyone involved are sure The Beehive will have a real chance of transforming Los Angeles, without displacing residents and negatively affecting those who need help the most. The goal, as Dr. Carson stated, is unity.

The launch event highlighted the power of community and returning resources to truly end systematic issues. Muoto encouraged all, “If and when you make it, please remember you must give back.”

“What we’re attempting to do here, has never been done before. We want other companies to get our ideas, improve on them and apply them to urban centers across the country,” Muoto optimistically stated. “It was a great turnout, which is 80 percent of the battle.”

To learn more about The Beehive visit https://www.solabeehive.com/.