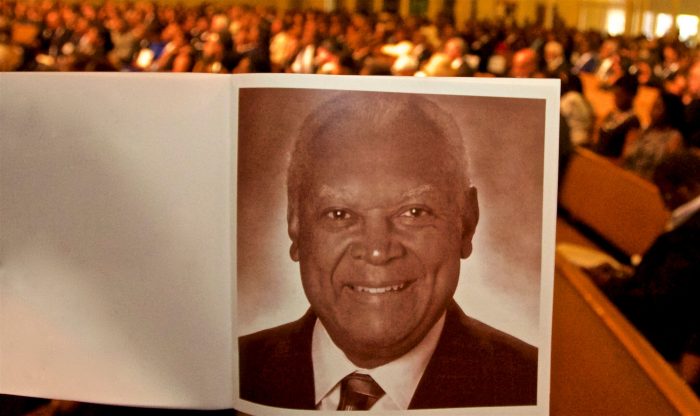 The funeral service for Mack was held at West Angeles Church of God and Christ, in South L.A. on Tuesday, July 10.

A prominent leader wherever he went, Mack was well known for his transformative work with the Los Angeles Urban League, which he revitalized and used to aid 100,000 people annually. He made a tremendous impact on the Los Angeles community and others around the nation. His legacy stretches from Washington, D.C. to Michigan, from Atlanta to North Carolina. Mack’s activism and dedication to improving the livelihood of others was mentioned throughout the service. 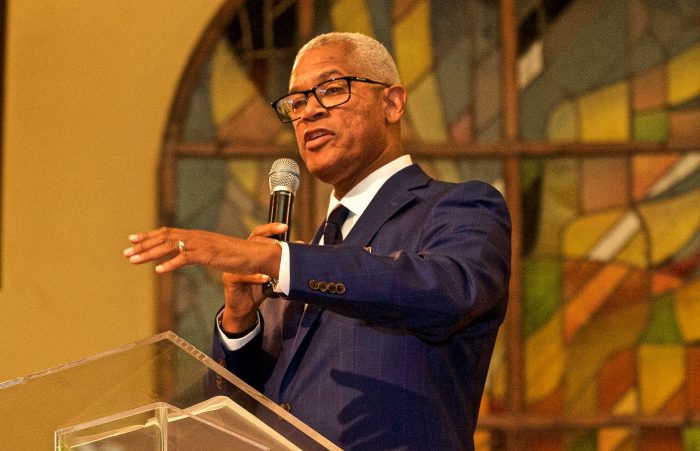 Upon entering the West Angeles Church of God in Christ on Tuesday morning, people of all backgrounds embraced in love. Until the moment that the funeral – also known as a celebration of life or a ceremony – began, the familial energy shared by everyone in the room was in full effect.

This is not to say that the event was not one of mourning; indeed, many spoke to the power of Mack’s presence in their lives. While Mack’s obituary outlined the “full life” he led, friends and colleagues gave truth to these words through speeches during the service. The tributes prepared were a direct testimony to his impact and to the man who is celebrated for his legacy as much as he is mourned for his passing.

These tributes composed the bulk of the ceremony and featured a speech by Weingart Foundation CEO and close friend of Mack Fred Ali, who was also with him on his final day. Others included Danny Bakewell, Sr., Magic Johnson, Mayor Eric Garcetti, former mayor Antonio Villaraigosa, and Chiefs of Police Charlie Beck, Bill Bratton, and Michel Moore, just to name a few. They each spoke about their own experiences with Mack, and each had beautiful and genuine thoughts to add to his legacy. 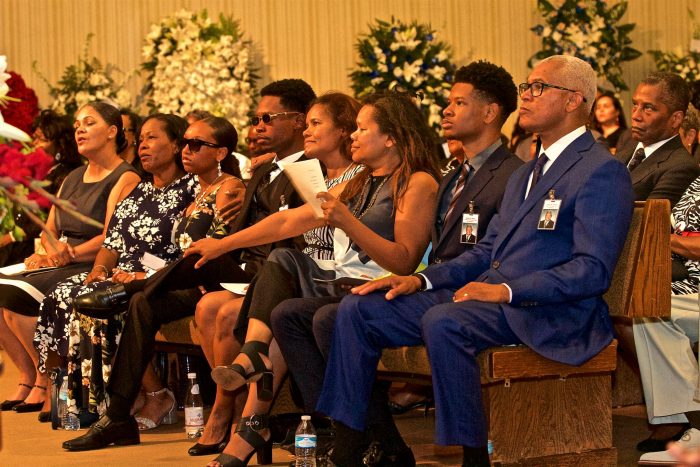 “My heart is ripped by this,” said LAPD Chief Charlie Beck during his tribute. “And I know when I look around the room … all of us feel the
same thing. All of us feel like we’ve touched greatness and it left us too
early. Even though John lived a full life beyond compare, all of us feel that
we personally were cheated by not having more time with him.”

Notably, current president of the National Urban League, Marc Morial, told the attendees that Mack “fought the good fight” no matter where he went. This was certainly exemplified by the communities he brought together in the church that morning. He encouraged and inspired law enforcement officials, political leaders, athletes, singers, and more to ask themselves how they could bring change to African American communities, communities of color, women, and more. And he was always there to help with that change. 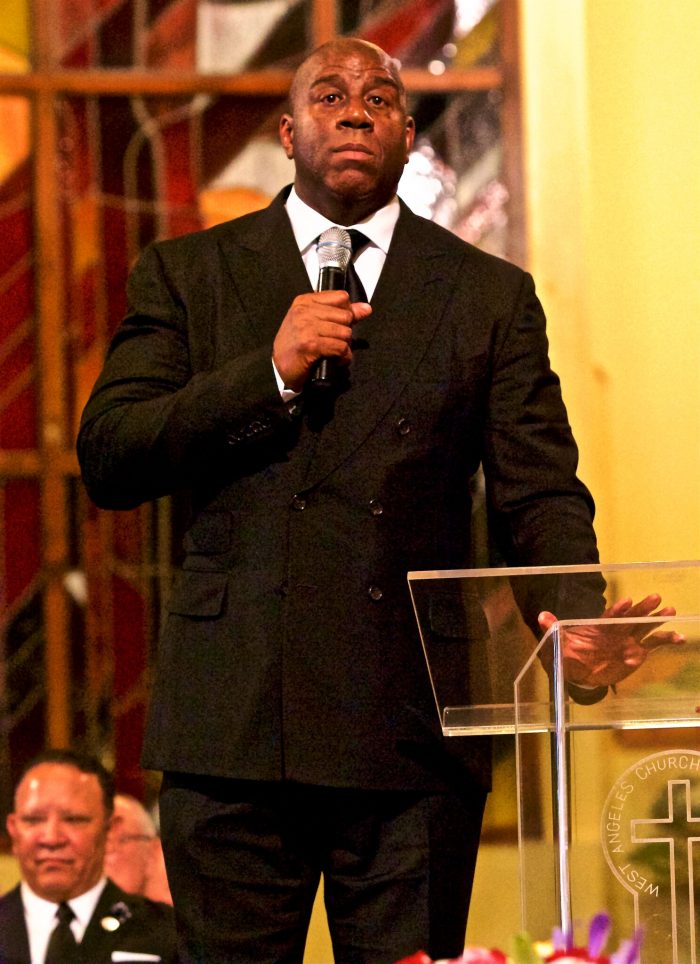 Magic Johnson speaks and gives his respect and admiration for the service of John Mack. (Photo by E. Mesiyah McGinnis)

Mack’s family could be seen at the front of the Church, accepting condolences and love from speakers throughout the funeral. Though he was out in the community well past his “retirement” (he never really did stop fighting the good fight), friends spoke of the intense love he held for his children, grandchildren, siblings, extended family, and late wife, Harriett. They too were there for the passionate work that Mack was a part of throughout his life.

of the Urban League movement and in the life of the people of Los
Angeles,” Morial said. “But I want to underscore this fact — John Mack was a
great father. John Mack was a great grandfather.” 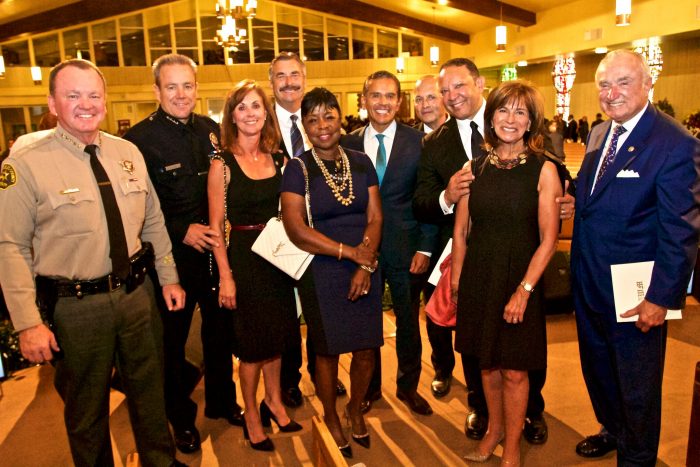 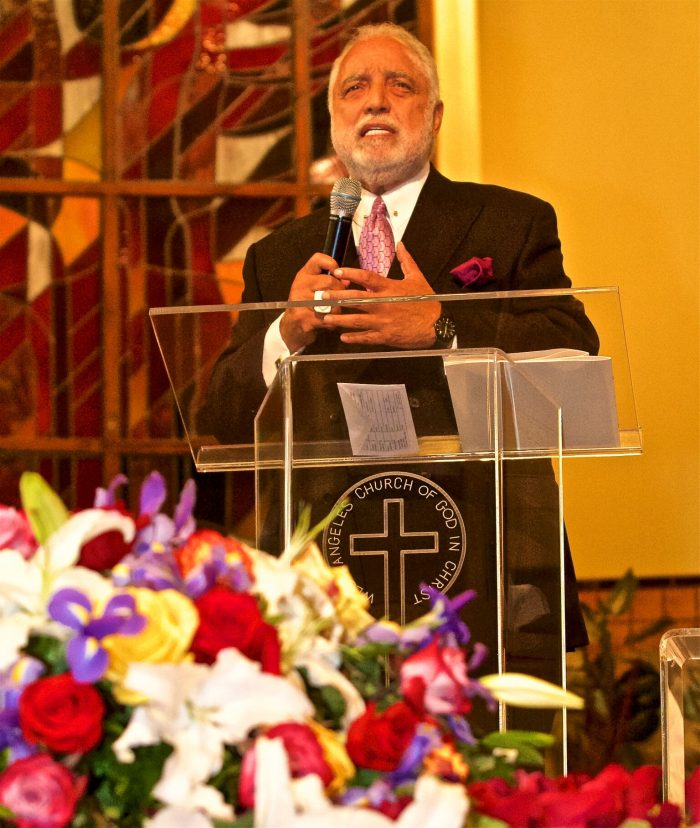 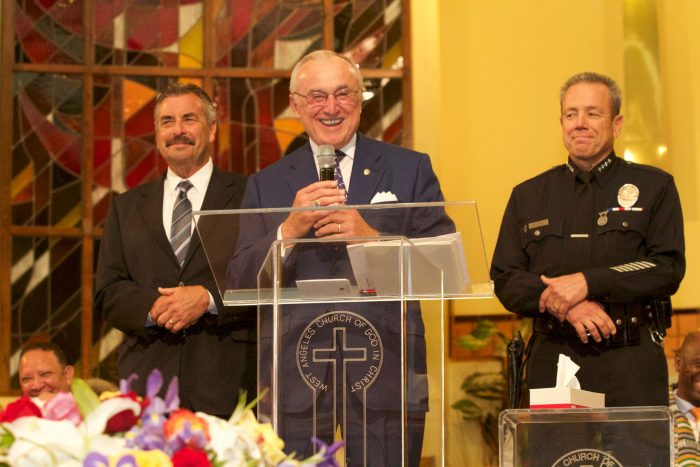