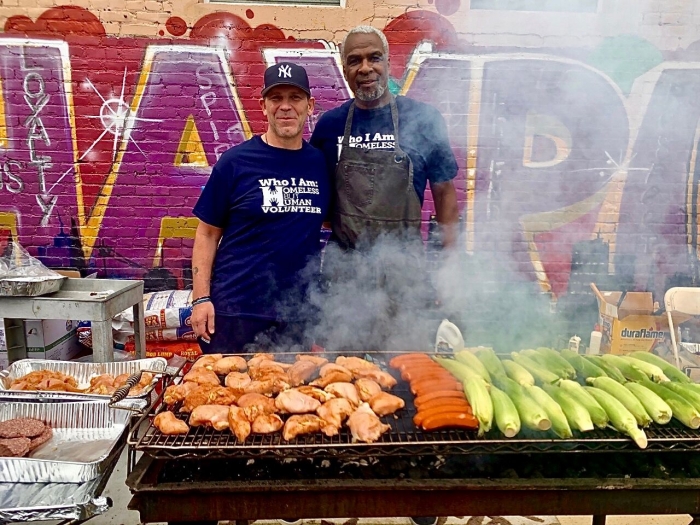 Every June, the arrival of BET Weekend in Los Angeles, means summer has officially arrived. The four-day fan festival leading up to Sunday’s BET Awards, was no different this year with concerts, entertainment, fashion and more.

Just blocks away from the Microsoft Theatre, where the awards show took place, is Skid Row, an area in Downtown Los Angeles where an estimated 2,000 people are living and experiencing homelessness, mental illness and other traumas. The ailing symptoms of L.A.’s homeless crisis create the essence of the neighborhood, with a majority of its residents being Black. One BET Weekend event acknowledged this community at the 2ndAnnual “Who I Am: Homeless but Human Pop-Up Festival.”

The Homeless but Human Help Give Care Foundation was founded by former music executive Henry Butler and his wife, casting director Leah Daniels-Butler. The organization partnered with the Charles Oakley Foundation and Los Angeles Community Action Network, also known as LA CAN, to bring the festivities of BET Weekend 2019, along with community services, to an area that is often overlooked. Over 850 meals were served to the community at the event.

“We were so pleased with the turnout for the event. Everything was perfect! Food, dancing and lots of smiles. We are already planning the next one,” said the Butlers.

Former NBA All-Star Charles Oakley brought his celebrity-chef skills to the event, along with his specialty — “healthy options with savory and delicious flavors.” The former New York Knick was behind the grill for most of the afternoon, barbecuing meals that were being served to the hundreds of Skid Row residents who lined up to attend the event.

“It’s nice to see a lot of locals come out and a lot of the Skid Row residents come out here and have a good time today,” said Oakley. “You know, you’re homeless but you’re human; it doesn’t mean you give up on life. Everybody has a chance. A lot of people come from the bottom to the top.” 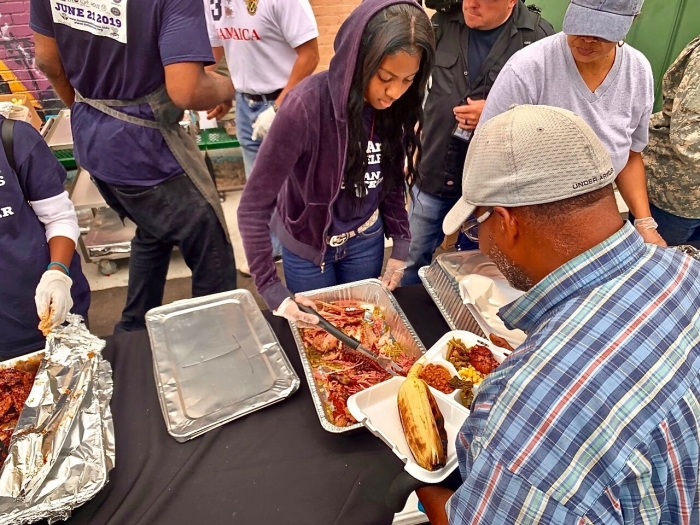 The festivities of the day included food, live music, and health and wellness services available for free to the Skid Row community. Laura Diaz, a HIV testing counselor for Los Angeles-based AIDS Healthcare Foundation, or AHF, says that it’s important to provide services to homeless people who often feel left out. AHF was at the event in their mobile HIV-testing van, a part of the free services they offer in Los Angeles.

“A lot of the time the homeless community feels left out and that, just because they are homeless nobody cares about them, and no one is here to help them out,” said Diaz. “I feel like it’s great that we’re here because we don’t just help them with testing. If they ask us for any resources for mental health, we’re able to refer them somewhere else, and AHF also just recently started ‘Healthy Housing’ to help homeless people and provide housing to people transitioning out of homelessness.”

The location of the pop-up event was Gladys Park, in the heart of Skid Row. The City of L.A. park was revitalized in 2008 by the event’s host, outspoken community activist and Hip-Hop artist General Jeff.

“Homeless folks are portrayed in the media like they’re a thing, not a person. So, we want to humanize and put faces and names and respect to ‘the give back component,’” said Jeff, also known as the “Mayor of Skid Row.”

“This has been well-received. The park is full, the people are lined up, and it’s already the makings of another successful event,” he said. 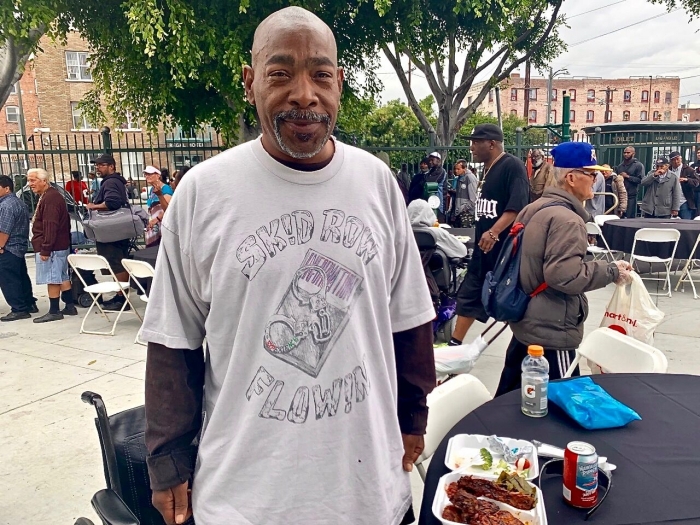 Skid Row resident Twin attended the pop-up. Twin designs T-shirts like this one he is pictured in. (Lauren Floyd/ Sentinel)

One resident in attendance was a man named Twin, who designs T-shirts. He enjoyed a plate of barbecue, as the DJ played old school hip-hop so loudly, the whole neighborhood shared in the grove.

“When you say, ‘homeless but human,’ it means everything because a lot of people don’t feel human, because we’re not treated like humans,” said Twin. Part of that reason he said, stems from the poor representation of homeless people in media.

“We got to better these conditions; people are just left for dead,” said Jeff. So, that’s why we got a lot of love and a lot of comradery here in Skid Row because you can’t just leave and forsake human beings like this if you’re really true to your people.”