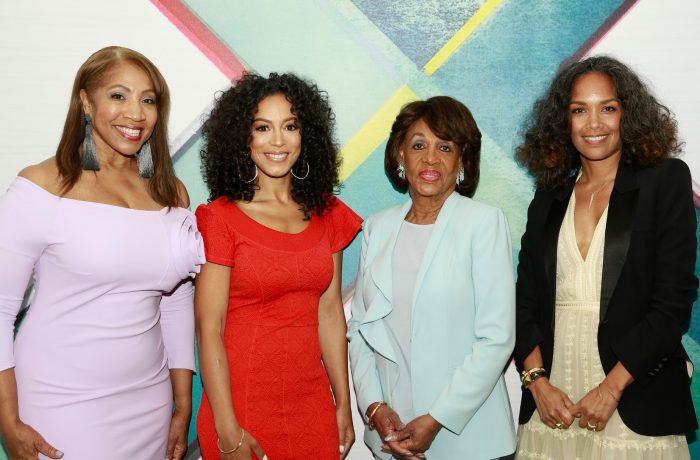 Recently, global data analytics company Nielsen hosted the Power of She Movement, where hundreds of women gathered to participate in core conversations surrounding technology, social media, entertainment and how to use these mediums to affect change in Black communities. The conference, held at the Hyatt Regency Hotel in Los Angeles, included a host of resources and information for attendees, most of whom were Black millennial women and business owners.

Grace says that in order to keep moving forward, Black Americans must learn to value their buying power and ability to make key decisions as consumers and digital influencers. According to data compiled by Nielson, Grace noted that Black consumers spend more than 1.2 trillion dollars annually, a number expected to increase by 3 billion by 2021.

When it comes to creating stories that empower Black communities, creator of hit TV-series “Girlfriends” and “Being Mary Jane,” Mara Brock Akil says her motivation to continue telling Black stories stems from self-love, her upbringing and an acceptance of her gifts. “Our normalcy, our beauty, our mix of struggle and celebration is all very precedent, very real and there was no separation of that. I accepted my gift early on and I’ve also accepted that I’m a visionary,” Akil said.

As for Congresswoman Maxine Waters, she also attributes her strength and ability to influence Black communities to her upbringing, coming from a large family of 12 siblings. She says she was always in a very competitive environment and had a strong mother. “In an industry where we rely on a lot of folks, I can do everything that’s related to my career, to the business that I’m in. I can write, I can design literature, I can raise money, I can organize and the reason that I’m able to do it, and I’m not bragging about it, is because that’s what my mother taught me,” Waters said.

Waters says it is important young people live their stories, embrace their creativity and never walk around as the victim, believing that life owes them anything. Waters says that having this perspective produces independence, a conquering spirit and a will to succeed.

“It has given me the opportunity to speak truth to power. I just have never been intimidated by anything or anybody. I’ve never been in awe of anything. That gives me the kind of freedom to not be intimidated and to be able to speak what’s on my mind,” she said.

Delving deeper into the core of ascendance from the oppression many Black communities still face, Akil says that it’s important current and older generations value the art of storytelling within the family structure. Akil says many times, older generations avoid revealing the pain of their past, but that a mark of progression is that younger generations of artists, activists and creators aren’t afraid to ask.

“I was 12 years old when I found out my grandfather’s name was John, because everybody called him Tex, you just never questioned anything. But this millennial generation who knows they’ve been lied to. The progress is that now, I want to ask, I want to know those stories,” Akil said.

“We have gone through a lot and we still are, but we have progressed. Information saves time and money and if the generations start talking and sharing and listening and learning from each other, you can save this current generation,” Akil added. “We need to share that more and more while we have each other here.”

Along these lines, Waters says that “it’s very important to listen to young people,” and understand the things that matter to them most. “You see things in them that helps you to grow and develop,” Waters stated.

As for the cause of women, Akils says she plans to continue to use her platform and advocacy efforts to create a space for the flaws and vulnerabilities of women. “We can do super things, we can be empowered, but we are human,” Akil says. And for Auntie Maxine, well, she’s still fighting the powers that be to bring justice in the White House and abroad. “Don’t be a victim, and don’t allow people to get in your way when you’re trying to accomplish things,” she proclaimed.

To the exclusive footage from The Power of She Movement Los Angeles, visit www.lasentinel.net.