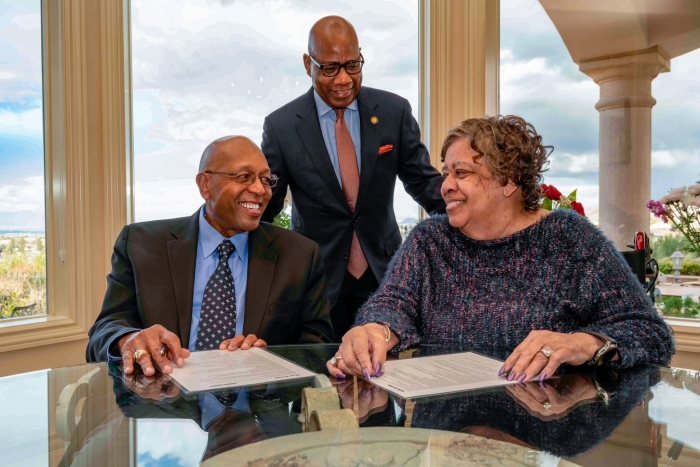 He attended Morgan State College nearly 40 years ago and had to drop out because he could not afford it. (In 1975, Morgan State was designated a university by the Maryland State Legislature).

According to a news release, the monumental gift is the largest private donation from an alumnus in University history.

It’s the most significant contribution of its kind to any Historically Black College or University (HBCU) nationwide from an alum.

“Morgan is so proud to call this son and daughter of the great City of Baltimore our own, and through their historic giving, the doors of higher education will most certainly be kept open for generations of aspiring leaders whose financial shortfalls may have kept them from realizing their academic dreams,” David K. Wilson, president of Morgan State University, stated in the release.

“For public institutions, like Morgan, our charitable alumni are testaments to the legacy we collectively uphold, and the Tylers’ generosity over the years, culminating with this transformative commitment, is a remarkable example of altruism with great purpose. We are forever indebted to the Tylers,” Wilson noted. 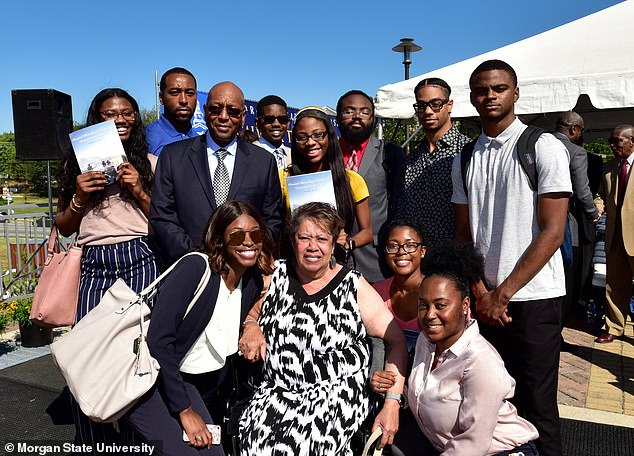 Their latest pledge follows a $5million commitment they made in 2016 for the fund, which to date has supported 222 students with full or partial scholarships. Pictured: Tina Tyler (center) and Calvin Tyler (third from left in tie) with recipients of the scholarships [File photo]

He enrolled at Morgan State College in 1961 to study and earn a degree in business administration.

Tyler counted as the first in his family to make it to college, but two years after enrollment, he was forced to drop out because he lacked the funds to pay for tuition.

Instead, he went to work as a UPS driver – becoming one of the first 10 UPS drivers in Baltimore.

At UPS, he steadily climbed the corporate ladder, ultimately working his way to senior vice president of operations before his retirement in 1998.

Tyler then joined UPS’s board of directors.

Still, Morgan State officials said he never lost sight of his humble beginnings, committing with his wife Tina to support those who, like him, encountered hardships and financial insecurities while pursuing their college degree.

In 2002, the couple started the Calvin and Tina Tyler Endowed Scholarship Fund to provide full-tuition scholarships for select need-based students residing in Baltimore – the Tyler’s hometown.

Because of the coronavirus pandemic, the Tylers expanded their giving, making the endowed scholarship available nationally. 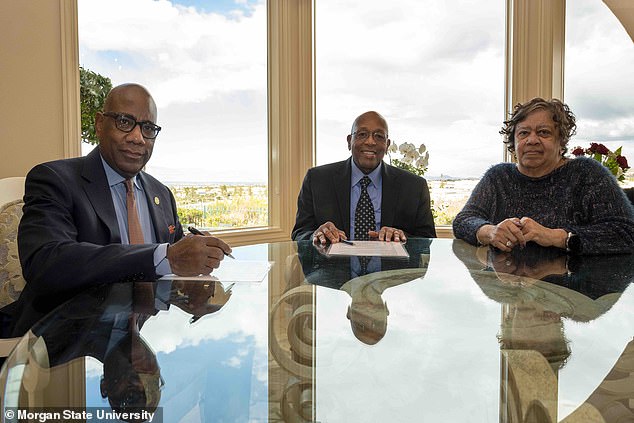 Tyler (left) and his wife Tina (right) are pictured with Morgan State University president David K. Wilson (center), who said: ‘We are forever indebted to the Tylers’

According to the release, the endowed fund has supported 222 Morgan students through 46 full-tuition and 176 partial scholarships, with the promise of benefiting more ‘Tyler Scholars’ with the increased multimillion-dollar pledge and an expanded scope.

“My wife and I have become keenly aware of the effect that the pandemic has had on a number of young people trying to get an education [and] we have the resources to help a lot of young people,” Tyler shared in a statement.

“This is why we are increasing our commitment at Morgan; we want to have more full-tuition scholarships offered to young people so that they can graduate from college and enter the next stage of their life debt-free.”

Five years ago, Calvin and Tina committed $5 million to Morgan State, a contribution that stood as the largest in the university’s history.

“Endowed scholarships and other gifts have far-reaching implications for any institution, but for a public, urban university like Morgan, with students from a broad spectrum of academic, social, and economic backgrounds, the need is especially great,” stated Donna Howard, vice president for Institutional Advancement.

“We are forever grateful to the Tylers for their unrelenting charity to alma mater. The impact of their generosity will have a prevailing effect fostering Morgan-made leaders for generations.”