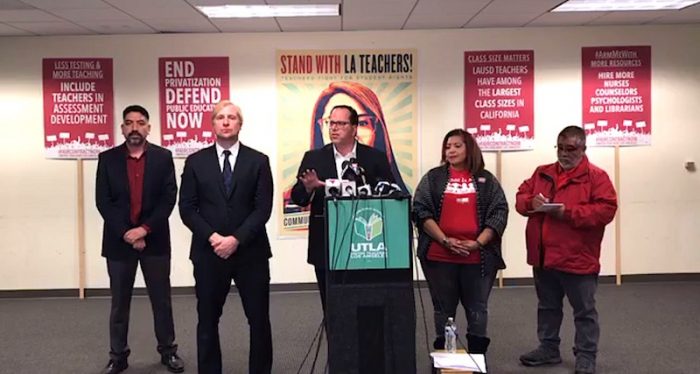 UTLA President Alex Caputo-Pearl (Middle) discusses the deal between UTLA and LAUSD to end teacher’s strike on Tuesday, January 22, sending teachers back to the classroom as early as Wednesday. (Facebook Photo)

Los Angeles Unified School District (LAUSD) wrapped up day six of the teacher strike with a historic agreement that is said to change the future of public education.

“This is a good agreement, this is a historic agreement. It gets to lower class sizes and it gets to the proper support staff. It gets to community based schools, to special education, adult education, expanded green spaces, and the list goes on,” said Los Angeles Mayor Eric Garcetti during a press conference on Tuesday, January 22.

After 21 hours of United Teachers Los Angeles (UTLA) and LAUSD superintendent Austin Beutner negotiating at City Hall with Los Angeles Mayor Eric Garcetti as the mediator, both parties have reached a tentative deal that would send educators and students back to school on Wednesday.

“I was happy to play a small role, but this would not have been done if you folks didn’t stick to it and say ‘it’s time for a new day for public education in Los Angeles.’ That new day begins now. This is not the end, this is the beginning of making sure LA gets the schools they deserve,” said Garcetti.

During the press conference, LAUSD superintendent Austin Beutner remarked: “The strike nobody wanted is now behind us. We welcome back with open arms and warm hearts our educators and look forward to a new day of learning for all of our students.

He goes on to say that Wednesday begins a new chapter for public education in LAUSD.

“Today and tomorrow when school opens, begins a new chapter in every classroom in every school in Los Angeles Unified. A chapter built on the strong foundation of this contract and our commitment to work together, all of us to make sure that every student gets a great education,” he said.

The summary of agreement provided by UTLA, addresses a cap on charter schools, a decrease in class sizes and an increase in school funding among many other issues.

“It was inspiring to stand with my colleagues in the rain. We got a lot of support from students, parents, the community, the police, and our administrators,” said LAUSD teacher Larry Strauss.

“I joined [the strike] because other teachers in the district are being asked to do the impossible. Still, our school would improve with at least one more teacher to reduce class size, a full-time nurse and librarian and more support for students in crisis.”

For the 2020-2021 school year, LAUSD stated that they would hire 150 full-time nurses and make available at least 41 full-time teacher librarians. Additionally, the district noted that it would hire 17 full-time counselors by October 1, 2019.

“After the strike, I would love to see the teachers in the Crenshaw area and all over the district get a raise, all of the schools in the area be given more resources and support staff, and for more community companies to get involved in regards to school grants, scholarships for the students, and mentorship,” said retired educator, counselor, and magnet coordinator, Rochelle Hall.

UTLA encouraged its members to vote ‘yes’ on the tentative agreement and as of press time, the deal passed by the union. 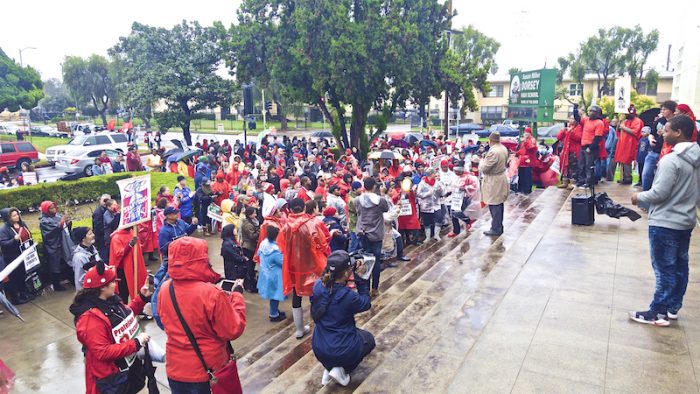 LAUSD teachers will return to the classroom, as UTLA agrees to terms to end the 6-day-old strike on Tuesday, January 22. (E. Mesiyah McGinnis / LA Sentinel)

“I am glad that LAUSD and UTLA have come to an agreement, and I want to thank the thousands of dedicated teachers, parents and students who were powerfully demonstrating their passion for our public schools over the last nine days,” stated California Governor Gavin Newsom.

“Increases in state funding are already translating into real progress for kids and classrooms, including investments in community schools. I look forward to working with the legislature to provide flexibility for schools to hire more counselors and nurses and to better support our neediest kids, including those in special education.”

LAUSD superintendent of the local district west, Cheryl Hildreth, expressed her thoughts on the agreement:

“I am extremely pleased that a tentative agreement has been reached. Our school leaders are ready to welcome teachers back to schools. The energy from all stakeholders has led to a re-commitment for public education and I believe the ongoing dialogue with the community will continue to strengthen the support we provide to our students and families.”

As stated by Garcetti, the deal that UTLA and LAUSD have agreed to is by no means the solution to over 30 years of underinvestment in public education. However UTLA president Alex Caputo-Pearl stated, it is a step toward helping the district receive the crucial services that it has been deprived of.

“We went on strike in one of the largest strikes that the United States has seen in decades and the creativity, and innovation, and passion, and love and emotion of our members was out on the streets in the community, in the parks for everyone to see and I am so proud of our members,” said Caputo-Pearl.

“This is much more than a narrow labor agreement. It is a very broad compact, around things that get a social justice, educational justice, and racial justice.”

The complete summary of the tentative agreement can be found at www.utla.net