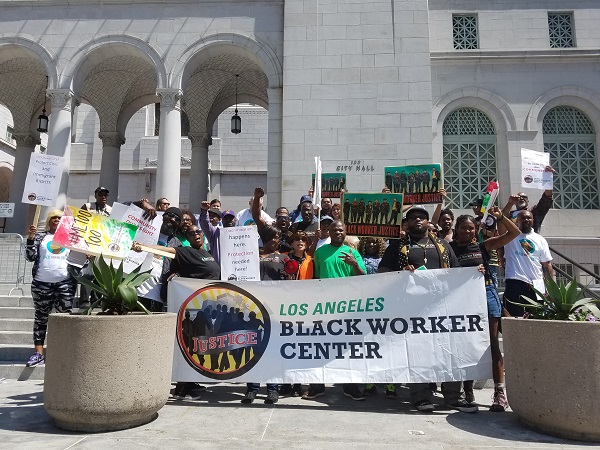 The Biddy Mason Park (Mason a former slave and pioneering philanthropist) served as the meeting ground for about 100 advocates representing worker rights organizations. The advocates joined together for a Local Enforcement Now! rally held last Tuesday to voice their support of localizing enforcement of civil rights protections in the workplace.

The rally highlighted Governor Brown’s support of prioritizing civil rights enforcement on the local level. Currently, California’s Department of Fair Employment and Housing is the state agency responsible for enforcing laws against workplace discrimination – with race and disability representing 70% of claims, followed by claims of sexual harassment.

To help protect workers on a local level, a civil rights advocacy campaign, led by the Los Angeles Black Worker Center, was launched last year to help provide protection to workers in the very cities where their discrimination happened. In response to their call, the Governor in October directed the formation of an advisory group – composed of key state representatives, community advocates and employers – to study the feasibility of local governments enforcing California’s Fair Employment and Housing Act laws in their boundaries.

The advisory group will provide a report with findings and recommendations to the Governor and Legislature by the end of this year. If approved, it will become the first important step toward combatting employment discrimination at the local government level.

Department of Fair Employment and Housing Director Kevin Kish, who recently convened the advisory group directed by the Governor stated, “In California, we have the strongest anti-discrimination laws in the country. But we know that the laws in the books are not always the laws at the work site,” said Kish. “So we’re proud to stand with Black Workers United, SEIU and others on the advisory committee to study local enforcement. And we’re excited to step up enforcement of our laws at the local and state level to protect all workers from discrimination.”

The rally was followed by a march to City Hall. The march was led as a demonstration for support of enabling local authorities to enforce workplace discrimination laws.

“Sadly, Black workers are two-and-a-half times more likely to file an employment discrimination complaint with the state but have half a chance of seeing any remedy. We can do better,” said Lola Smallwood Cuevas, Executive Director of the Los Angeles Black Worker Center, who helped lead the rally. “In 2017, our members pressed for a change in the law to put more enforcement boots on the ground in our cities and create an administrative process that brings the weight of city influence with local employers to bear.”