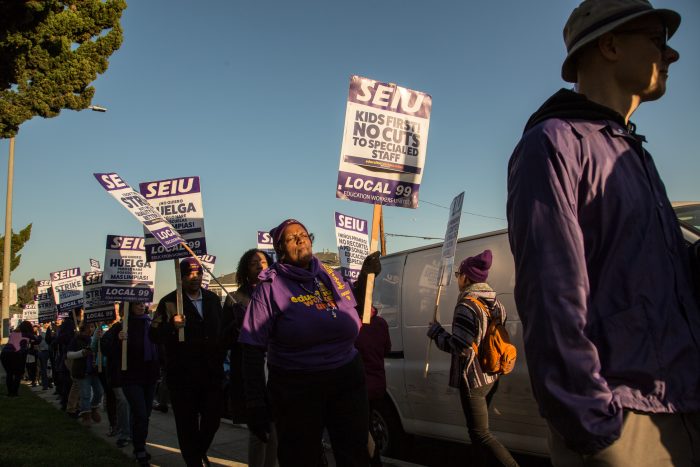 Members of the Service Employees Union Local 99 began voting this week on whether to stage a strike against LAUSD. (Courtesy Photo)

Los Angeles Unified School District officials are asking thousands of service workers to help them avert a strike, one that members of the Service Employees union Local 99 began voting on this week. The group includes custodians, cafeteria workers, special education assistants and other peri-educators, who say that after a year of negotiations, no significant movement has been made on key issues, including wages and staffing shortages.

“In fact, SEIU Local 99 has filed charges against the District for bargaining in bad faith,” said union members in a recently released statement.

“If workers vote to authorize a strike, and all legal avenues in the collective bargaining process are exhausted, a strike could come as early as this school year…”

Writing to school board members on behalf of the California Legislative Black Caucus, Assembly Member Chris Holden, Chair of the Caucus, states in his letter: “We wholeheartedly support the custodians, cafeteria workers, special education assistants, bus driver, teacher assistants, playground assistants, and other dedicated education workers represented by SEIU Local 99, who ensure that children can learn in a clean, safe, and supportive environment. Many are working mothers and fathers, people of color whose own children attend LAUSD schools … Through their contract negotiations they are seeking to improve student services and their own livelihoods.”

“Our goal is to secure a fair contract,” union Vice President Tanya Walters, a bus driver told reporters. “We want good livelihoods for the dedicated school workers who help our children learn. And we want staffing levels that ensure every child has the support and services they need to succeed.”

The union has accused the district of cutting hours of special education assistants and under-staffing janitorial services at schools. The union also wants the district to increase its proposed 2 percent wage hike offer.

“After nearly a year of negotiations, LAUSD has not made any significant movement to improve our wages and staffing for student services,” said officials.

“To hold the District accountable, our bargaining team is asking us for the authority to call for a lawful strike should the district continue to bargain in bad faith and continue to present proposals that disrespect the value we bring to the District.

“SEIU Local 99 members must vote to authorize a lawful strike. Voting against the strike means you are satisfied with whatever LAUSD offers. Make sure your voice is heard…”

The District continues to depend on a largely part-time work force to provide critical support services, including student nutrition, health and safety, and classroom support, union members said.

“Additionally, after school programs and parent training, which are proven to increase graduation rates, are in dire need of expansion. Career ladder opportunities to hire more teachers from our local school communities have not been funded in years. And while we’ve worked with the District to lift the wage floor at LAUSD, many of the District’s most experienced, long-time workers still struggle on wages that have not kept up with the rising costs of living,” they said.

Concretely, adequate staffing, fair wages, better training and education and “safety and respect” are what the union is fighting for.

LAUSD chief labor negotiator Najeeb Khoury told local reporters that the district values the union as a “labor partner” and has “engaged in economically responsible bargaining, which means we must make proposals that take into account our structural deficit.”

“We have a solid offer of a 2 percent ongoing raise for the 2017-18 school year, adding seven extra work days or their equivalent for this school year, creating a $1 million cleanliness fund, and allowing for economic reopeners that allow the parties to come back to the table if our economic situation improves in the 2018-19 or 2019-20 school years.
“We encourage SEIU Local 99 to continue working with us at the table to find solutions that take into account our economic reality,” Khoury said.
“We trust that SEIU Local 99 will follow the law and will not declare a strike
before going through all the statutory mandated procedures, including mediation
and fact-finding.

”Voting will take place at select work sites across LAUSD through Friday, March 23. Schools, where voting is scheduled to take place, will be posted on the union’s website daily along with the time members can cast their vote.