Foster says $100 Black art and culture infrastructure project to be ‘our very own’ economic catalyst, despite obstacles from COVID-19 pandemic 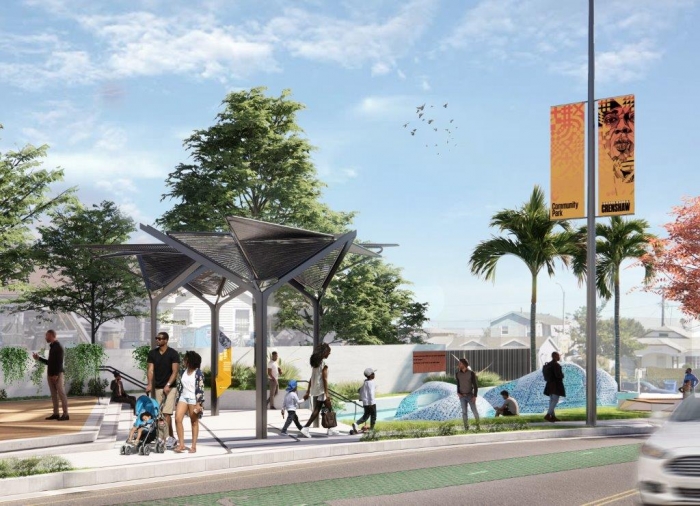 “Here’s this opportunity to engage the community around a Black-led project that is squarely focused on uplifting our community,” says Jason Foster, president & COO of Destination Crenshaw, a community-driven cultural infrastructure project that recently broke ground along its namesake, legendary South L.A. boulevard. “It’s about thriving not just surviving.”

Foster, 37, who earned his degree in finance at Howard University, took the helm six months ago. He says he was drawn to the role because of the project’s potential to not only be a catalyst for Black economic development along the boulevard, but a model for urban place keeping across the country. Foster said, “I had to be a part of this.”

Destination Crenshaw was originally conceived as a way to respond to the devastating impacts of the Metro LAX line construction project along Crenshaw and gentrification concerns around transit development.  Its visual impact will mean permanently stamping one of the city’s most historic neighborhoods as the cradle of Black American culture with spaces devoted to Black creativity, ingenuity, artistry and architectural excellence. While still under construction, Foster says Destination Crenshaw’s economic impact has already begun for some businesses. 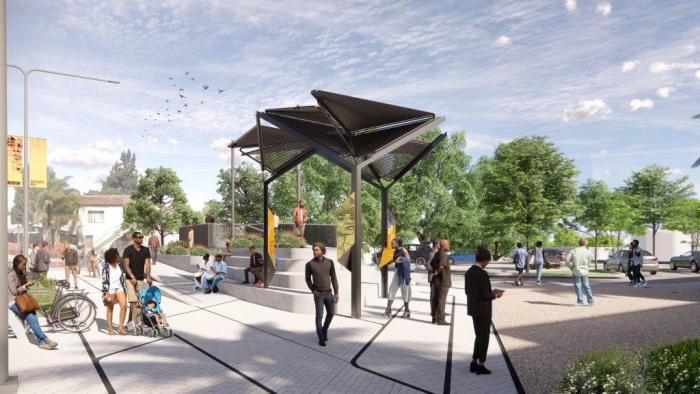 As the COVID-19 pandemic began to rip through the foundation of Black-owned businesses, Foster and his team recognized that getting through the economic storm of the pandemic would be the bridge to supporting thriving firms again. Destination Crenshaw launched a targeted small business engagement strategy, now called DC THRIVE, to build on City Councilmember Marqueece Harris-Dawson’s Senior Meals Program.

“Our senior meals program was about taking care of our neighbors and elders first and foremost,” says Councilmember Harris-Dawson. “But also, about ensuring that our businesses can survive the economic fallout of this pandemic and eventually thrive again. We learned that we have what we need to support each other and build economic security in our communities,” Marqueece Harris-Dawson said.   The program linked area businesses with seniors-in-need as the pandemic made it unsafe for them to make regular grocery or restaurant visits.

“We know our businesses are already resilient,” says Foster about launching DC Thrive. “We knew that with the right support, our businesses could come out of the other side of this pandemic prepared to thrive.” DC Thrive facilitates business support by connecting Crenshaw businesses to funding opportunities such as the Paycheck Protection Program (PPP), private

grants, and technical assistance to help businesses market themselves and pivot toward being competitive in a digital and in-person marketplace. 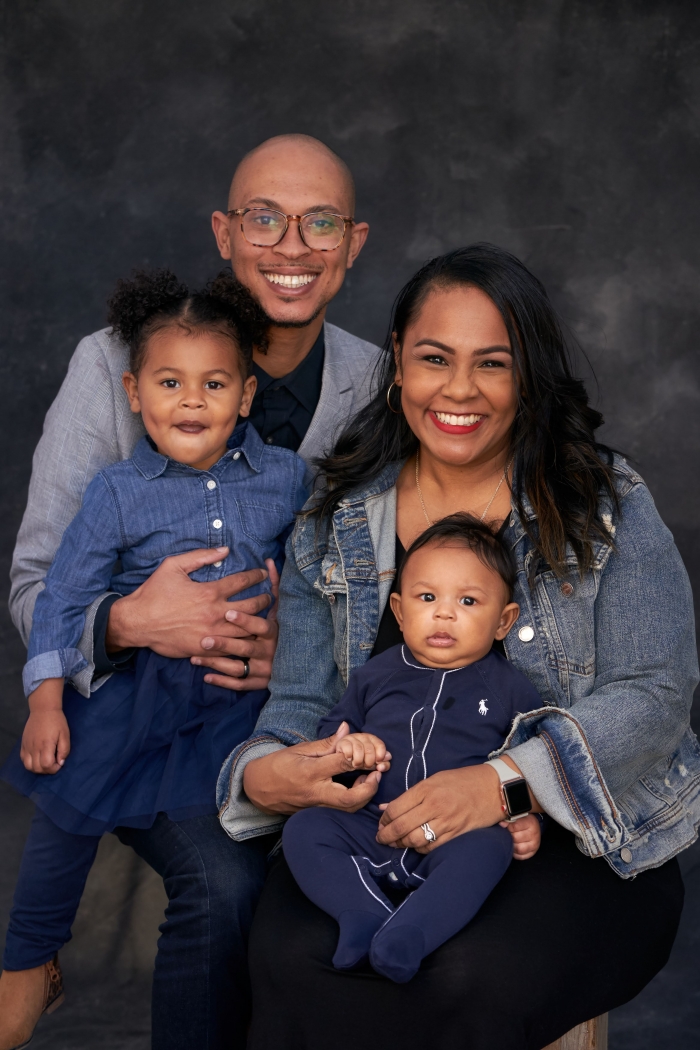 Destination Crenshaw President and COO, Jason Foster and wife Janelle, pose for a family photo with their children (Courtesy Photo)

Jordan’s Hot Dogs is one of more than 80 Black-owned businesses along the corridor that has benefitted from the DC Thrive’s technical support program as the pandemic forced businesses to pivot to digital sales platforms to stay competitive.

“We funded placement of an intern from TEC Leimert, another one of our outstanding businesses with Jordan’s Hot Dogs, providing them with social media marketing support at a time when business was moving almost entirely to the digital space because of COVID-19,” Foster said. “The result was a success for Jordan’s, for TEC Leimert, and for DC Thrive — it’s a model we plan to scale.”

For critics who once worried that the project would push out Black owned businesses and homeowners in the area, the success of Jordan’s Hot Dogs is confidence that Foster and his team are listening to the community’s first concerns.

For his part, Foster says a focus on helping Black people thrive is rooted in his family experiences, “I started my career by studying finance at Howard University. I wanted to understand how we as Black people can have a better relationship with money. How we can have our community pride and intrinsic value match our community aesthetic,” he said.

Foster has had stints working at non-profits across the country, studied affordability in American studies and led River LA as CEO — the riverfront beautification project that brought him back to Los Angeles with his wife Janell, in 2011. “Destination Crenshaw is the summation of all that work for me. It’s our community being engaged at the infrastructure level on how the city can serve our economic needs, while improving our quality of life.”

It’s not just benefiting businesses who are taking notice of Destination Crenshaw’s potential to boost businesses. Tunua Thrash-Ntuk, executive director of Local Initiatives Support Corporation Los Angeles (LISC LA), who has praised Foster’s short tenure. “Jason Foster has done something remarkable — Councilmember Harris-Dawson created a platform for unprecedented business support, and Jason has built upon it with intention and purpose. He understands that Destination Crenshaw, above all, must be an economic asset to the community,” she said. 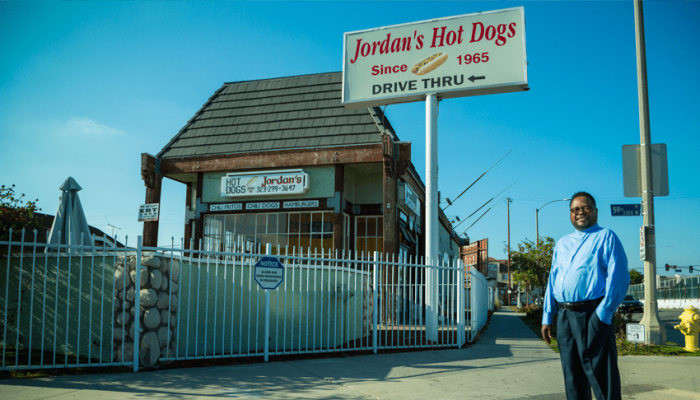 “The DC Thrive vision and its related services are critical to economic stability and growth in our community,” Thrash-Ntuk said, a South L.A. native and formerly executive director of the West Angeles Community Development Corporation.

DC Thrive’s focus on economic stabilization now and revitalization in the long-term, has been shepherded by Destination Crenshaw’s new President and Chief Operating Officer, Jason Foster. It is, he says, “proof-positive of the kind of economic engine” Destination Crenshaw could become in South Los Angeles.

Even before responding to COVID-19, Destination Crenshaw was designed to foster economic opportunity in every aspect of its development. To that end, it established a 70% local hire goal for the construction phase, concentrating employment opportunities in a community that has long needed access to good paying jobs. “It makes us an industry leader,” says Foster. “It’s unheard of and it is exactly what the community wants to see — this project can be the economic engine for business owners and workers that was promised.”

“This is for us, and by us and unapologetically so,” says Karen Mack, a Destination Crenshaw Advisory Council member and executive director of LA Commons in Leimert Park. “You can see in the assembly of community members at the table and the team that is doing the work this project is culturally competent, which we rarely, if ever, see these types of public infrastructure and community development projects.” 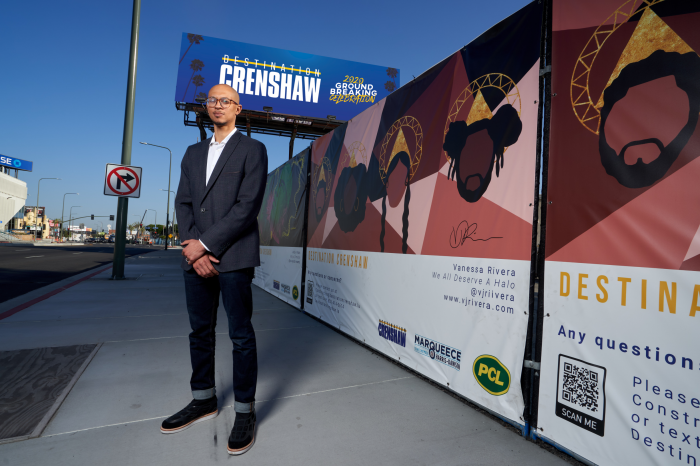 Mack is one of more than two dozen community members advising Destination Crenshaw, a group brought together by Councilmember Marqueece Harris-Dawson. “Thanks to [Harris Dawson’s] leadership, significant community engagement had already begun when I came onto the project.”

Foster sees his role as, “driving it forward to completion. “My north star is creating the best project possible for the Crenshaw community. Achieving equity at the neighborhood level is huge.” Destination Crenshaw’s leadership team includes Black urban planners, construction firms, advisors for planned digital integrations, fundraisers, communicators and of course, artists — more on that in a bit.

Perhaps, most notably so far, is its history making architectural team, led by Zena Howard — the Black woman who led the architectural design and development of the Smithsonian National Museum of African American History and Culture in Washington, D.C. Howard is principal and managing director of the North Carolina practice of Perkins + Will, which is a firm known for its work alongside the late Phil Freelon. Freelon’s legendary accomplishments are well noted among Black and non-Black architects alike.

“She gets this community and she understands this project and that shows up throughout its design elements with guidance and input from the Advisory Council,” Foster said. Howard’s architectural elements for Destination Crenshaw are breathtaking. For example, she conceived of a design element inspired by the African Star Grass — vegetation used for bedding on slave ships that crossed the Atlantic, survived relocation and eventually took root in the Americas — that acts as connective tissue along the corridor. The elegant, visually stunning design captures the unifying experience of the African Diaspora. “It is resilient from an environmental standpoint and is really, truly symbolic of our resilience as a people. We grow where we are planted despite the obstacles,” Howard said.

Eventually, artists and architects with intimate knowledge of the design plans say that along Crenshaw Boulevard there will be markers representing this sense of Black resilience. “It’s a powerful representation of the Black experience in America and in Los Angeles,” notes Foster. “The crux of this design is specific to the Black experience of our community.” Given its focus on economic development long before any art is installed, it’s easy to forget that once complete, Destination Crenshaw will include more than 100 commissioned works of art, architecturally stunning community spaces and pocket parks, and hundreds of newly planted trees boosted by what could become a thriving commercial corridor. 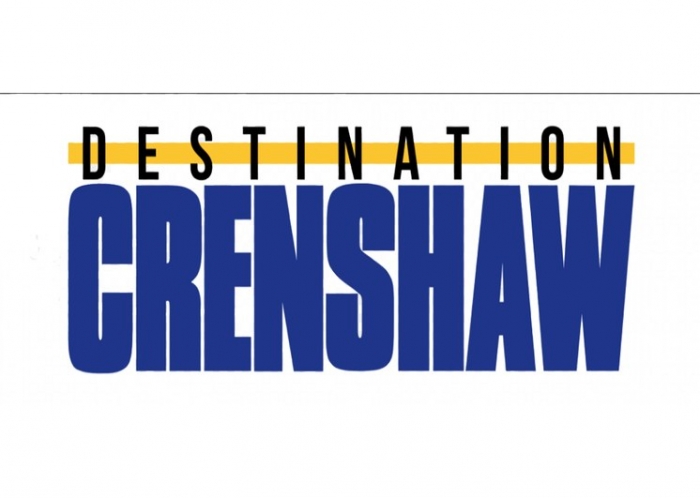 This is a welcome development for many business owners who have suffered months of construction, on top of the impact of the pandemic. Development for the Crenshaw/LAX Line took away hundreds of parking spaces and trees that provided shaded areas.

“It’s been extremely challenging for businesses, but Destination Crenshaw is proving that it is creating something that will have a lasting economic impact for this community and for our young people,” says Cary Jordan, co-owner of Jordan’s Hot Dogs.

Changes are already visible along the corridor; last month fencing began going up around what will become the largest pocket park along the boulevard at Vernon and Crenshaw — Sankofa Park. Local artists have already begun submitting proposals to design art work that will beautify the construction fencing over the next several months.

“My first priority is to complete the construction of the Destination Crenshaw project that the community envisioned. That’s my first job,” Foster said. “But more than that, I want kids in South L.A. to grow up in a healthy and prosperous environment, seeing beauty in their own neighborhoods — and know that this equitable investment provided hope for their futures.”

Once complete, the project will have added 10 beautifully designed community spaces and architectural features to a 1.3-mile stretch of Crenshaw Boulevard, becoming a local and international standard for public works projects in Black communities. It could also prove to be an economic model for communities just like it.