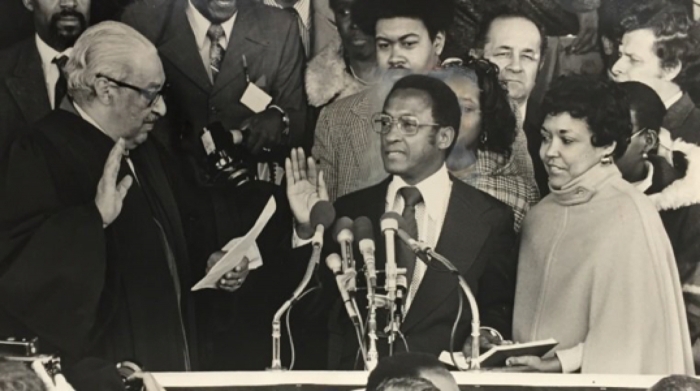 Prominent American civil rights activist and Washington, D.C. politician, Sterling Tucker passed away on July 14, in Washington, D.C. Tucker was the first chair of the District of Columbia City Council and ran for mayor in 1978. He was defeated by Marion Barry by 1,500 votes.

Tucker was an active part of the Poor People’s Campaign and organized Solidarity Day, a 50,000 member protest in Washington D.C. on June 19, 1969. The Poor People’s Campaign was started by Rev. Dr. Martin Luther King, Jr. and the Southern Christian Leadership Conference (SCLC), in 1968. It would be continued under the direction of the Rev. Ralph Abernathy, Dr. King’s chief lieutenant, after King was assassinated on April 4, 1968.

The Poor People’s Campaign was focused on economic justice for poor people in America. Today that work is continued by Rev. William Barber II. Sterling Tucker worked alongside Reverend Abernathy and Coretta Scott King in what was the first formal activist effort to bring economic justice for African Americans.

Tucker served on the first District of Columbia City Council from 1969 to 1974, as home rule was established and served one term. He was also chairman of the Washington Metropolitan Area Transit Authority. During the early 80s he began a consulting firm called Sterling Tucker and Associates and in 1990 was chairman of the American Diabetes Association.

“He was fundamental to the leadership of the city,” former city council chairman Arrington Dixon told the Washington City Paper about Tucker. Dixon remembered Tucker as mild mannered but impactful. In 1979, President Jimmy Carter nominated Tucker to be Assistant Secretary for the Office of Fair Housing and Equal Opportunity at the United States Department of Housing and Urban Development.

Sterling Tucker is survived by his two daughters, Michele Jeffery and Lauren Tucker; four grandchildren and many friends and colleagues.

His body laid in repose in the John A. Wilson Building, where the D.C. City Council meets in Washington and funeral services took place at the McQuire Funeral Home on Georgia Avenue NW. The Tucker family asked that donations be made in his name to the American Diabetes Association, P.O. Box 15829, Arlington, VA 22215 and Trinity Episcopal Church Outreach Ministry to the Homeless, 7005 Piney Branch Road N.W., Washington, DC 20012.