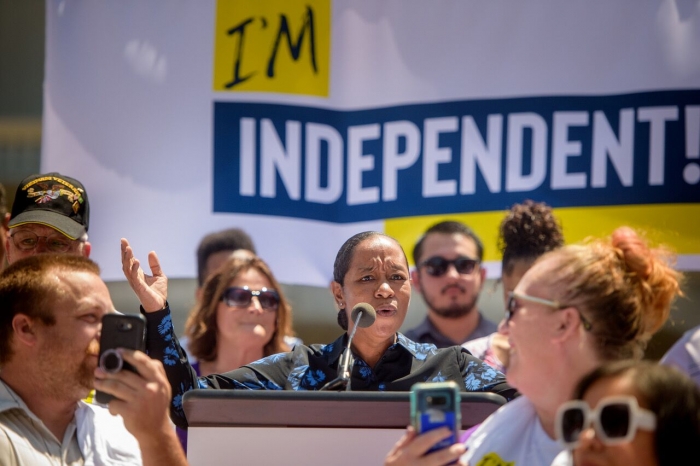 “My cellulitis has become so chronic, if I get scratched, cut, pinched or burned, I’ll have to be admitted to the hospital,” says Angela Agbasi, 64, a Cancer survivor and Los Angeles single mom who drives Lyft and Uber about 30 hours a week to supplement her Social Security income.

“I have four kids – three in college and one in high school. If things change, and I have to become an employee, I won’t be hirable. I won’t be able to take care of
my children,” says Agbasi, adding that driving on her own time allows her to make it to her frequent doctor appointments and work in a low-risk, low-stress environment that works well for her health condition.

On Monday, July 8, Agbasi joined other members of the “I’m Independent Coalition” for a press conference at the Los Angeles Chamber of Commerce. At the event, a panel of advocates, community leaders and drivers called on lawmakers to fix the California Supreme Court’s Dynamex decision and amend AB 5, a bill the full Senate is expected to hear and vote on in September. Nearly 500 on-demand delivery drivers from across the state also rallied at the State Capitol July16 asking state legislators to fix the pending bill and protect their flexibility.

On July 11, the Senate Labor committee voted to pass the legislation. It is now headed to the Appropriations committee for review.

If passed, the legislation also referred to as the “Dynamex Bill” or the “Employee Misclassification bill,” would make it tougher for companies in California to enter into working agreements with freelancers or independent contractors.

“Big businesses shouldn’t be able to pass their costs on to taxpayers while depriving workers of the labor law protections they are rightfully entitled to,” said Gonzalez in May when the Assembly voted 59-15 in favor of AB 5.

But for many African American ride-share and on-demand delivery drivers who enjoy the freedom of working for themselves and the benefits of setting their own hours, the California Supreme Court ruling known as Dynamex that created the restrictive ABC Test – and AB 5 that codifies the decision – not only threatens their livelihood but also throws a wrench into their ability to control how much money they make.

“A striking 97 percent of African-American drivers in California say being able to maintain a flexible schedule is important to them,” says Pastor William Smart, President and CEO of the Southern Christian Leadership Conference of Southern California. Smart, who is based in Los Angeles, says joining the effort to oppose AB 5 gives him a chance to be the voice of thousands of people in his community who depend on driving apps for a living.

He says, for many African Americans drivers who live paycheck-to-paycheck, being able to drive when and where they want provides a safety net for those times when surprise expenses pop up that could cause “drastic financial setbacks.”

In California, tens of thousands of people make their living or generate additional income by driving for Lyft, Uber, DoorDash, Grubhub or other on-demand platforms. Only seven percent of them would prefer to become full-time employees of those companies, according to the “I’m Independent Coalition.” 87 percent of those drivers say they are satisfied with their jobs and 65 percent need the flexibility of setting their own work hours because they have other obligations with fixed schedules like school.

“I have done the corporate thing. I have been in the office,” says Shataya Wilson, who clocks about 40 hours a week driving for Lyft. Wilson, who moved to Los Angeles from Oregon to pursue her goal of becoming a music producer, says even though she drives full-time, the flexibility of choosing when she works allows her to still chase her dreams while being assured of a steady stream of income.

In 2018, the California Supreme Court instructed businesses in the state to apply an “ABC” test to determine whether a worker is a freelancer or employee. For a worker to be classified as a freelancer, employers would have to prove that the person is (A) not under the contracting company’s control, (B) is doing work that is not central to the company’s business, and (C) has an independent business providing a service. If freelancers or contractors don’t meet those requirements, companies would have to employ them and provide all the pay and benefits required under California labor laws.

But instead of creating a uniform policy for all workers in California, the “I’m Independent Coalition” is urging Gonzalez and other lawmakers to consider what they are calling a “modern approach” to work in the state. They are advocating for clarifications in the law that allow independent workers who overwhelmingly want to stay independent to remain so.

The app-based drivers are pushing for a legislative solution that allows workers to stay independent while creating a system to expand benefits; provide an opportunity for contractors to organize as an drivers’ association; and supporting legislation that calls for more transparency on how much companies earn for passenger rides or food and goods deliveries – and how much they, in turn, pay drivers for the those services.

“It is encouraging to see that lawmakers are not using a sledgehammer to fix AB 5,” says John Warren, Publisher of the San Diego Voice and Viewpoint. “The problem of unprotected workers in California must be removed with a scalpel that does not destroy the things that are working for  people and our economy.”

Warren says the law would “devastate” his business if he has to offer full-time positions to all the freelancers he works with to deliver the part-time yet “mission-critical” services they provide. Therefore, he is joining app-based drivers to urge lawmakers to create exceptions in the law for them, and small newspaper publishers like him, too, who are struggling to keep their lights on because of dwindling revenue from advertising.

“We are in the business of providing news that is vital to our readers’ lives. They depend on us for it, and we depend on freelance editors, writers, technicians and drivers to make sure that information reaches them,” says Warren. “Many of our freelancers are entrepreneurs, their own bosses, and the majority of them can’t work full-time jobs because of other responsibilities like school, young children and other clients. Others live far away and can’t afford to pay rent to be within commuting distance of the cities and towns where their clients are located.”

Although a majority of African American ride-share drivers, are opposed to being reclassified as employees if AB 5 passes, a small yet vocal number of other Lyft and Uber drivers across the state support the bill.  On June 10, when Gonzalez hosted a rally at the Capitol in support of her proposal, protesting members of the “I’m Independent Coalition found themselves face-to face with hundreds of ride-share drivers and union workers who were also there to show their support for the legislation and lobby legislators to pass it. Many of them contend that ride-share companies are worth billions of dollars now and some like Uber, for example, have even begun to invest in new technologies like self-driving cars, while many of their drivers work long hours and still can’t make ends meet.

“CEOs and COOs are making $45 million a year. They went public, it’s a billion-dollar corporation, and their drivers, as we hear, are sleeping in their cars,” Gonazalez said at the rally.

Ideally, Agbasi says, she would like to see legislators make a compromise that provides protections for  the drivers who want the security and benefits of employment and still makes provisions for contractors like her who cherish the autonomy ride-share drivers currently have.

“I really, really love my job the way it is,” says Agbasi. “All I want is to be able to pursue happiness and take care of my family and have some fun while I’m doing that.”