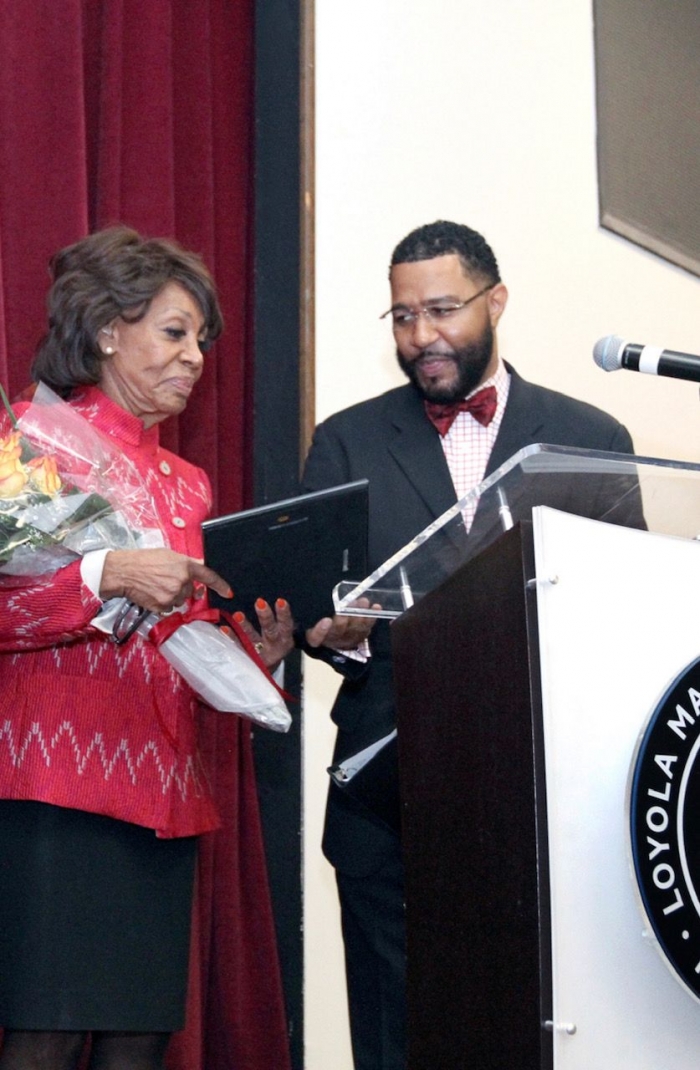 Congresswoman Maxine Waters (CA-43rd District) delivered the keynote speech and was named the second recipient of the University’s Rev. Dr. Martin Luther King, Jr. Award for Excellence in the Advancement of Social Justice before a capacity crowd during a ceremony held in the campus’ Saint Robert’s Auditorium this past Thursday, January 23.

Rep. Waters, was recognized during the University’s annual Rev. Dr. Martin Luther King, Jr. Interfaith Celebration & Prayer Breakfast, which attracted nearly 400 students, faculty, staff, administrators, and members of the local community. Dr. John Sebastian, Vice President of Mission and Ministry, opened the gathering by emphasizing the role that everyone – regardless of race, gender, and religious affiliation – plays in carrying King’s work forward and implored everyone gathered in attendance to consider their specific role.

LMU senior Alexis Harris, read from the Torah and led those in attendance in a reflection that correlated with the event’s theme, “In the end, we will remember not the words of our enemies, but the silence of our friends.” Following, Coordinator of LMU Muslim Student Life, Kienan Taweil, provided the event’s invocation. Several dignitaries, including Drs. Lane Bove, LMU’s Senior Vice President for Student Affairs, University President, Timothy Law Snyder, and Stefan Bradley, Chair of LMU’s Department of African American Studies spoke about King’s example and legacy, the broader themes of diversity, inclusion, and equity, and the importance of carrying forward the positive energy generated by the event.

Congresswoman Waters electrified the crowd from the onset, receiving a standing ovation upon entering the venue. Rooted in humility, her speech emphasized her gratitude, as well as her admiration and reverence for Dr. King and the example he set. In true fashion, however, her speech served as a call to action, as she touched on several issues that clearly resonated with all of those in attendance, including gun violence, police brutality, and rising student loan debt. Senior Ryan Hopkins, who like Rep. Waters, was born and raised in St. Louis, Missouri, delivered a very moving testament, during which he expressed his pride in the Congresswoman, their hometown and his upbringing, and urged attendees to engage in true friendship by simply supporting each other. 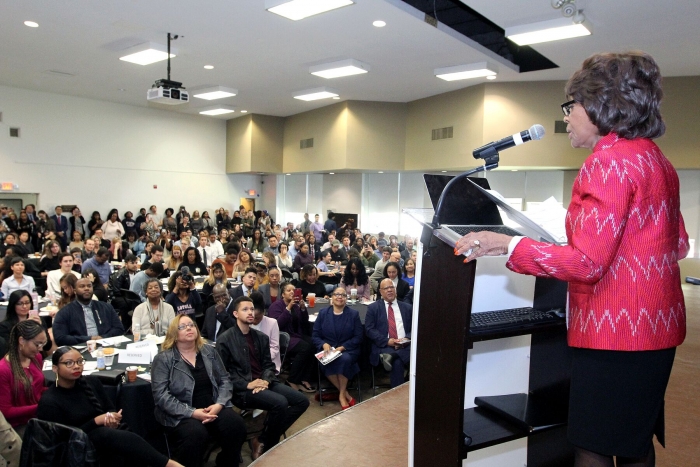 AnaLexicis Bridewell, Coordinator of the campus’ TLC Program and a member of the event’s planning committee, underscored the importance of both the event and Congresswoman Waters as the honoree, stating,”Congresswoman Waters reminded us all that our voices are powerful, and that we must speak-up. It only made sense that she was the recipient of this year’s award.” Meanwhile, Dr. Nathan Sessoms, Director of the campus’ Office of Black Student Services, commented,”Today was a great day for the LMU Community. Auntie Maxine is obviously one of the most powerful women in politics today and has always served as a shining example of courageous leadership in the face of criticism, ridicule, and potential danger. She always speaks truth to power and, in doing so, embodies the spirit of Dr. King in so many ways. She is a most deserving recipient.”