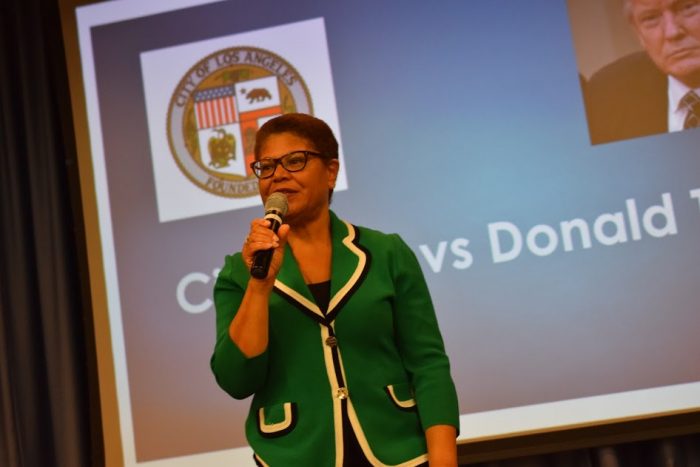 On Saturday, June 24, Rep. Karen Bass (D-Calif.) held a town hall meeting at Holman Untied Methodist Church, the topic of the town hall was  TRUMP’S ASSAULT ON BLACK AMERICA. She gathered elected officials, community leaders and organizers to inform and engage the community as to what’s at stake under the Trump Administration.

The event was well attended, with over 200 constituents in the audience. Speakers included

One of the main focuses of the town hall was to update the crowd on the impact, the Trump Administration is having and will have on the African American community, the second was to mobilize volunteers to help engage the Palmdale community which sits in a Republican district.

Bass’ Sea Change Leadership PAC | FEC Committee is working to turn blue the House seat that will be up for grabs in 2018. Its currently held by Republican Steve Knight.

After the informative town hall, Bass sat down with Sentinel to discuss many issues. 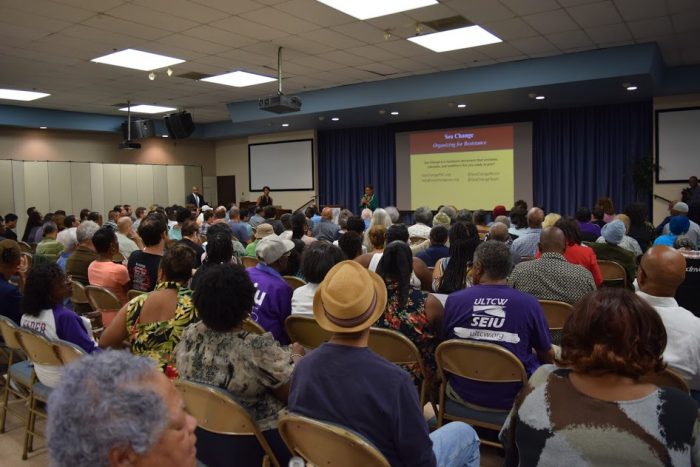 Sentinel: While the mainstream media continues to focus on Trump’s tweets to shift focus to what Obama did or didn’t do, does the Congressional Black Caucus have any plans to work with the Black press nationally on strategic messaging?

Bass: That’s a good question. I know that our chairman, Cedric Richmond, does talk to the NAJB. I think it’s an excellent suggestion and I will definitely take that back.

Sentinel:  There’s a lot of talk about Nancy Pelosi and a need for new House leadership. And also, the DCCC (Democratic Congressional Campaign Committee)

flooded a lot of money into the recent House elections and they lost. What are your thoughts?

Bass: Well, I think realistically speaking it was very important to be engaged in those elections to the maximum but we also knew that those were deep red seats and winning was going to be slim but we still had to compete and fight. Now today what we’re doing in this town hall meeting is focusing on a seat that really should be a democratic seat to begin with because the registration has more [Democrats] than Republicans.

So, I think it was critical that we were involved in them and I view them as practice and warm up. It cost a tremendous amount of money but there is no way we could have turned our back and not competed. On the other hand, the idea that we could have won was a huge long shot.

Sentinel: And about Nancy Pelosi?

Bass: Nancy was re-elected to leadership with overwhelming support, but if you have a group of people that are dissatisfied that’s not really all that unusual. I think, to me, if it was serious then you’d see somebody actively campaigning to be the leader. You do not see that right now.

Sentinel: On June 9, The Congressional Black Caucus received an invitation from the Whitehouse for a second meeting with Donald Trump. It has been reported that the CBC declined. Was there a lot of debate or conversation about it?

Bass: No, I’ll tell you we had two discussions in the Black Caucus; the Black Caucus meets every Wednesday. We talked about it twice, there was virtually no discussion and I say that because everyone was on the same page. Why would we go back and repeat the meeting we already had when we didn’t have any results from the first meeting. I think it was our sense that the president wanted more of a photo opp and why would we do that when there’s serious repercussions to our community that are happening right now because of [Trump’s] administration. We raised all those issues a couple of months ago, what would the point be to go back?

Sentinel: Omarosa went on Fox News after you all declined the meeting and she said the CBC is not taking their seat at the table. What are your thoughts?

Sentinel: Speaking of substantive ways. Why did you create Sea Change?

Bass: The original need was change. I created Sea Change seven years ago. A lot of members of Congress have leadership PACs, political action committees and the purpose of them is to raise money so we can help elect other members of congress or protect our current members. But since Trump was elected, the focus of my political action committee has changed. So now what I’m focusing on is supporting the activism and trying to get back the seats. So, the purpose of today’s meeting was because I was really concerned about the African American response to Trump.  I’ve been holding town halls for 13 years and every town hall I have held up until Trump’s election was always overwhelming Black, unless I held it near Santa Monica. And so, I’ve begun to be concerned, is it that Black people feel like this is just another white guy, are we missing the significance of his administration? So, the purpose of this town hall was to really focus on Trump’s impact on the African American Community.

Sentinel: And speaking of impact do you really think Trump will be impeached before 2018 or is flipping Congress in 2018 important to impeach him?

Bass: That’s a very good question. A couple of things, we historically … we meaning democrats, don’t turn out in the mid-year elections. That’s been our history, we need to change that pattern. I was worried to be honest with you a few weeks ago that his presidency was going to collapse to soon, because my fear is if his presidency collapses that people will say, ‘oh well, now the crazy man is gone and not recognize how serious Pence is. What everybody has told me, I’m not a lawyer but everybody has told me that this investigation is going to go on for at least a couple of years.

Now my other fear is people are going to get so burned out on Trump that they’re not going to show up to vote. So, the significance of what Sea Change is trying to do is stay engaged with voters from now until next November. We can’t go knock on their doors a month before the election and expect for them to be enthusiastic. We have to keep them constantly informed and the reason for that is because in the press all [you’re] hearing is Russia, well after a while you’re going to go, ‘OK whatever, it hasn’t had an affect on me.’ So, it’s our job is to keep voters educated and engaged until the next election.

The other significance about this town hall is we learned that in Palmdale, 13% of the population is Black. That’s higher than Los Angeles where it’s 9%. So, Black people need to be out knocking on the doors and educating voters, we need to talk to our relatives cause half of them got family out there. So, we need to go out there and support them because one thing I’ve learned, they feel very isolated and so we need to go out there and help them understand they’re not isolated, they have our support and we want to help them change things out there.

To get involved with helping Sea Change visit www.seachangepac.org.