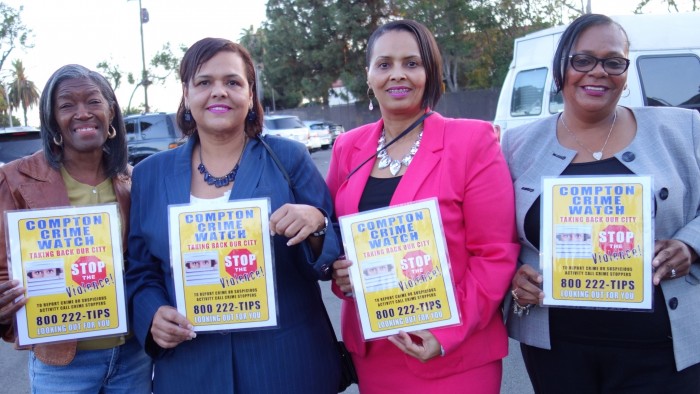 Due to a spate of shootings in Compton that have left 19 dead so far this year, a “Compton Watch: Take Back Our City” rally was held on May 26 in Gonzalez Park to address the recent rash of shootings.

According to statistics from the Compton Sheriff’s station, a spate of four murders was committed during the weekend of May 14. Of the 19 homicides committed in Hub city this year, 17 remain unsolved, a spike from the nine murders committed in Compton in 2015.

“We’re holding this event to kick off the Compton Crime Watch,” said Zurita, adding that the shootings have reached an “unacceptable” height in the city.

“We want to encourage the neighbors and citizens of Compton to get involved and to report crime.”

District Four Compton Councilwoman Emma Sharif said that she was especially concerned about how the rash of violence was affecting the city’s youth.

“As a former school board member, I know firsthand how violence affects our young people,” she said.  “It affects their sense of security as they travel to and from school–and this is an all too real threat.  As a council member, I am also aware of the impact violence has on this city when our children lose their lives.   It is a tragedy that impacts all of us–our families and our entire communities.”

“I lost my grandson, 25-year-old Marquise Bryant, in October of 2015,” reflected 79-year-old William Bryant, who said that Marquise lived with him. “The evening he was killed, Marquise was visiting his mother. He was walking out of the door of his mother’s house around 10 p.m. A car drove by and someone inside the vehicle opened fire,” recalls Bryant, sadly shaking his head. “The police later told me that it was a case of misidentification.”

“Several years ago, Compton’s crime rate was down and we were doing real good,” recalls Compton resident Ronald Freeman. “But they let a lot of these young guys out when the county jails became overcrowded. That’s when I noticed that Compton’s homicide rate went up.”

Lt. Lecrivain of the Compton County Sheriff’s Department addressed the meeting and urged residents to pick up the phone and call if they see a crime being committed. She said she understood that some Compton residents might feel intimidated to call and report a crime. “We can talk on the phone. We don’t have to come to their homes. We want this to be a community where people feel safe to walk their dogs, to run, and let their kids play in the front yard. That’s our vision for Compton.”

Nish West, 28, a Compton resident, attended the rally to support the effort to end gun violence in the city. She can still recall how shocked she was when her boyfriend, Robert Shann, was gunned down several years ago.

“He was shot multiple times in broad daylight,” recalls West. “A friend called and told me the news.”

West said that the incident greatly affected her. “I didn’t date or go out for two years,” said West. “I didn’t visit Robert’s gravesite until two years later.”

West felt that those in the city who own guns should think hard before they pull the trigger. “Ask yourself, what would it feel like if you were staring down the barrel of that gun?”

On the evening of May 15th at approximately 9:20 p.m., Richard, the father of a five-month-old son, went with a friend to McDonald’s when they stopped at the 76 gas station at Wilmington Avenue and Caldwell Street in Compton.

A rash of gunfire rang out and Richard and his friend were shot. The two friends crumpled to the ground and were later declared dead. “The police called me and told me the news,” recalls Gwendolyn. “I was able to identify my son by his tattoo. He had his girlfriend’s name tattooed across his chest.”

Asked to describe her son, Gwendolyn reflected, “He was quiet, a hard worker, determined, helpful and kind hearted. He was taking courses at El Camino Community College and he was also taking courses at the Long Beach airport.  He wanted to get a job in aircraft recovery.”

The Williamses’ said they are determined to find their son’s killer. “We’re going to find out who did this,” said Gwendolyn quietly, adding that a reward for the identification of the suspect has yet to be announced.  “We are not going to let our son’s death be filed away by police and become a cold case.”

To report a crime or suspicious activity, call 800-222-TIPS.