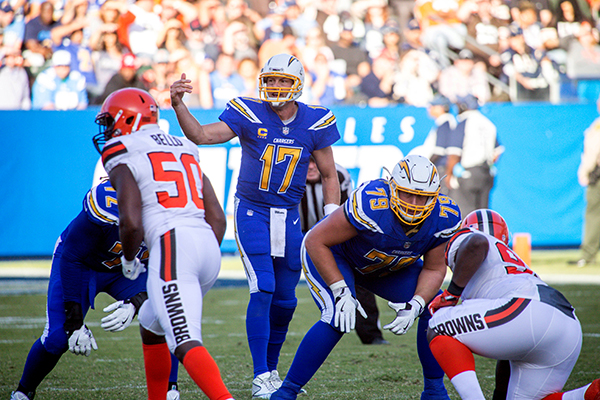 The Los Angeles Chargers have gone from an 0-4 start to now winning three consecutive games with the latest being a moral victory against the winless Cleveland Browns. The  Los Angeles football club is now positioned atop the AFC West in a three-way tie with the Kansas City Chiefs and the Oakland Raiders.

“To be in this position doesn’t surprise me at all,” said Chargers head coach Anthony Lynn.”Guys have worked hard and they’re committed to the process. They never stopped believing.”

One of the players Lynn highlighted was cornerback Casey Hayward who spent the week away from the team after his brother was killed in a car accident on Monday (Nov. 27) night. Hayward rejoined his teammates for one day of practice just in time to play in Sunday’s matchup against the Browns.

“These guys are like my brothers, so anything for those guys,” said Hayward who finished with three combined tackles and two pass breakups. ”If you had told us when we started with an 0-4 record that we would be where we are now, people would say you’re crazy.”

As one of the NFL’s premiere corners, Hayward aided the Chargers defensive effort to limit Josh Gordon’s production to four catches for 85 yards. 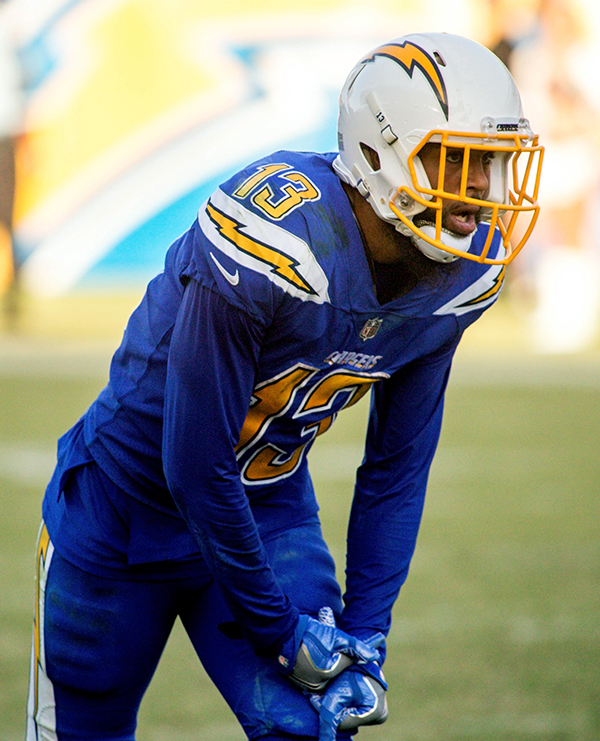 Chargers wide receiver Keenan Allen totals 1,000 yards on the season with a 26-yard reception during the Chargers win over the Browns at StubHub Center on Sunday, December 3, 2017.
(Robert Torrence/L.A. Sentinel)

“I want to develop our relationship and chemistry to make sure that he makes more plays than he made today,” said Browns rookie quarterback, Deshone Kizer.

It was Gordon’s first on-field appearance since Dec. 21, 2014 after being suspended for over two seasons for various violations of the NFL’s substance abuse policies. Kizer nailed a pass to tight end, David Njoku for a 28-yard touchdown. He passed for 215 yards on the day.

The Chargers first score did not come until the second quarter with a 28-yard field goal made by Travis Coons, the team’s new kicker. Coons was signed last week after starting kicker Nick Novak was placed on injured reserve. He made four field goal attempts after his first attempt  from 38 yards, clanged off the upright during the Chargers’ opening drive of the game.

As the second quarter persisted, the Chargers finally started clicking on offense. The team was determined not to give the Browns their first win of the season for the second consecutive year. Last season, the Browns sole victory came at the hands of the Chargers on Christmas Eve.

“We’ve been through so much adversity, a lot of ups and a lot of downs,” remarked Melvin Gordon III, Chargers running back.

Chargers quarterback Philip Rivers passed for 344 yards on the day including connecting with his favorite passing target, Keenan Allen for a touchdown. With that, Rivers notched his 335th career touchdown pass to surpass Giants quarterback Eli Manning for seventh all-time.

Allen also went on to have a career day recording over 1,000 receiving yards for a second season.

“It feels great,” Allen said on the milestone. “It’s something I definitely wanted to do.” Allen has scored a touchdown in three of the last four contests. 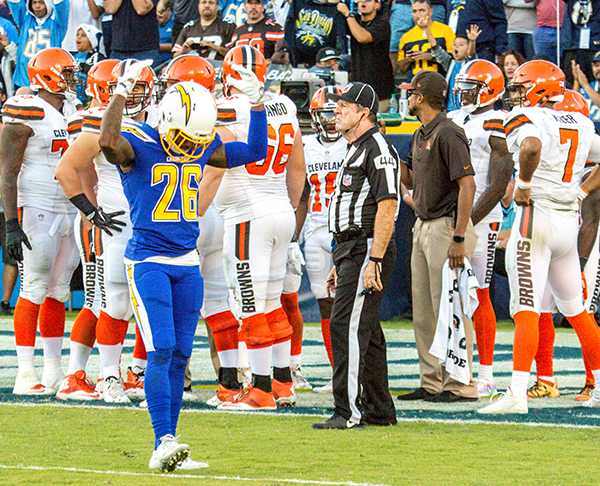 The Chargers defense set the offense up in great positions to capitalize with a few splash plays throughout the game. The marquee defensive play came in the fourth quarter by Joey Bosa who strip-sacked Kizer on third-and-goal. Bosa’s sack led to a fumble recovery by Chargers’ Denzel Perryman.

“[Kizer] can tell you that he shouldn’t take a sack there, he should have at least ran and got down so we could have made a field goal,” commented Browns head coach Hue Jackson.

The defensive efforts continued late in the fourth quarter as Chargers safety Adrian Phillips intercepted Kizer to put the game away.

“I think we are headed in the right direction,” said Hayward. “We can win this quarter of the season and be in the playoffs. We have a chance to make some noise.”

This 19-10 win over the Browns has positioned the Chargers to keep their playoff hopes alive. The team has the opportunity to win their fourth game in a row when they host the Washington Redskins on Sunday, December 14 at StubHub Center.