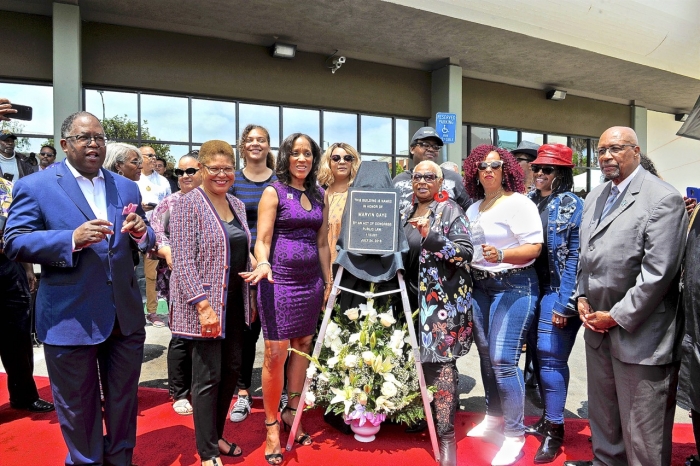 The popular tunes of singer Marvin Gaye echoed throughout the dedication ceremony that added his name to the Dockweiler postal station in South L.A.

Thanks to legislation sponsored by U.S. Representative Karen Bass and passed into law by the U.S. Congress, the station at 3585 S. Vermont Ave. is now known as the Marvin Gaye Post Office, an action that pairs nicely with the Marvin Gaye stamp, which was issued in April.

More than two hundred people shouted cheers and applauded loudly as the sign was unveiled designating the location’s new name.  Gaye’s family was on hand to witness the occasion along with elected officials, community leaders and many who are still inspired by his music.

As one of the leading artists of Motown, Gaye cemented his place in the hearts of both Black and White America with songs such as “Ain’t That Peculiar,” “How Sweet It Is” and “Let’s Get It On.”  He ignited social justice campaigns with his 1971 groundbreaking album, “What’s Going On,” which addressed contemporary issues such as poverty, drug abuse, suffering and the Vietnam War.  Proving that his music remains popular, the crowd sang along and danced to his records, which served as a backdrop to the ceremony.

“I’ve always been a Marvin Gaye fan my whole life and when the family approached me, I said ‘absolutely, this is something we have to do,’” said Bass. “I knew the Democrats would not have a problem with it and I went to the Republican leadership and said, ‘we got to get this done’ and they were on it.  I’m very happy that after a long time, we’re getting this done.” 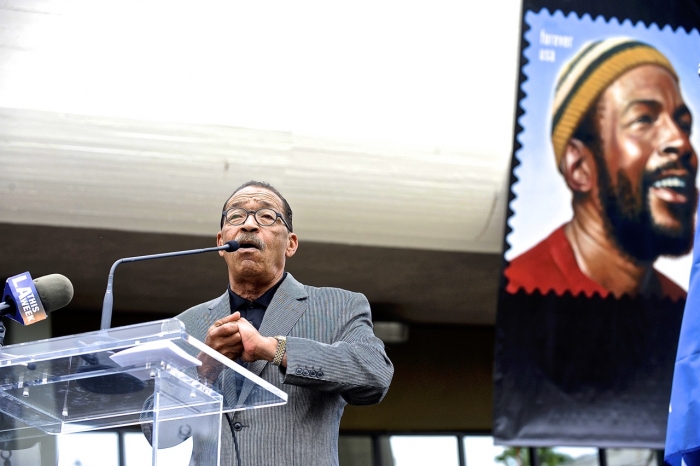 Sharing his sentiments, City Council President Herb Wesson said, “It’s so important that we take this station and name it after an individual that not only grooved us with his voice and wonderful music, but he was also one of the first to come up with songs that had social significance and meaning and inspiration – things that made us to be proud of who we are, proud of how we look, and proud of how we act.”

Gaye’s niece, Karla Gordy Bristol, offered a more intimate reflection about her uncle, recalling his fun personality as well as his kindness and thoughtfulness to his family.  Bristol also read a letter from Gaye’s son, Marvin III, who expressed appreciation to Bass and noted that his father is the first Motown artist to have a stamp and post office named for him during the record company’s 60th year celebration. 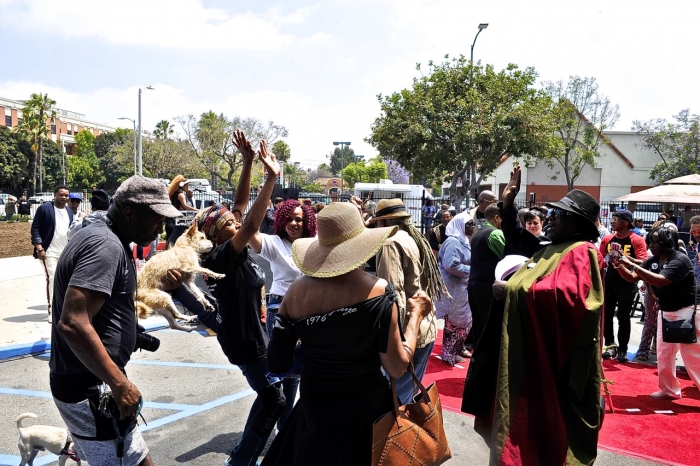 A big crowd came out for the dedication of the Marvin Gaye Post Office (Valerie Goodloe/L.A. Sentinel).

Marvin III is currently touring with his play about his father, “The Pride and Joy Marvin Gaye Musical.”  Also, Ron Brewington read a statement from Gaye’s children, Nona and Frankie, which conveyed their gratefulness for the naming of the post office.

“I just want to say, Marvin, well done,” said Gaye’s sister, Zeola. “Growing up with my brother and hearing him sing on the corners and doo-wopping with his group, I would have never thought in a million years that I would be standing here saying thank you for the post office being dedicated to him.

You can buy his stamp at his post office! You can’t get any better than that. Thank you so much from the family!”

As the ceremony closed, Bass reminded the audience of the significance of Gaye’s lyrics. “Marvin Gaye had a message 30, 40-years-ago that resonates today. He talked about justice, discrimination, the challenges that we face as a people and unfortunately, we still continue to face those challenges today,” she said.

“When we listen to his music, we can be inspired and remember that the struggle continues.  We’re not going to allow ourselves to go backwards!”