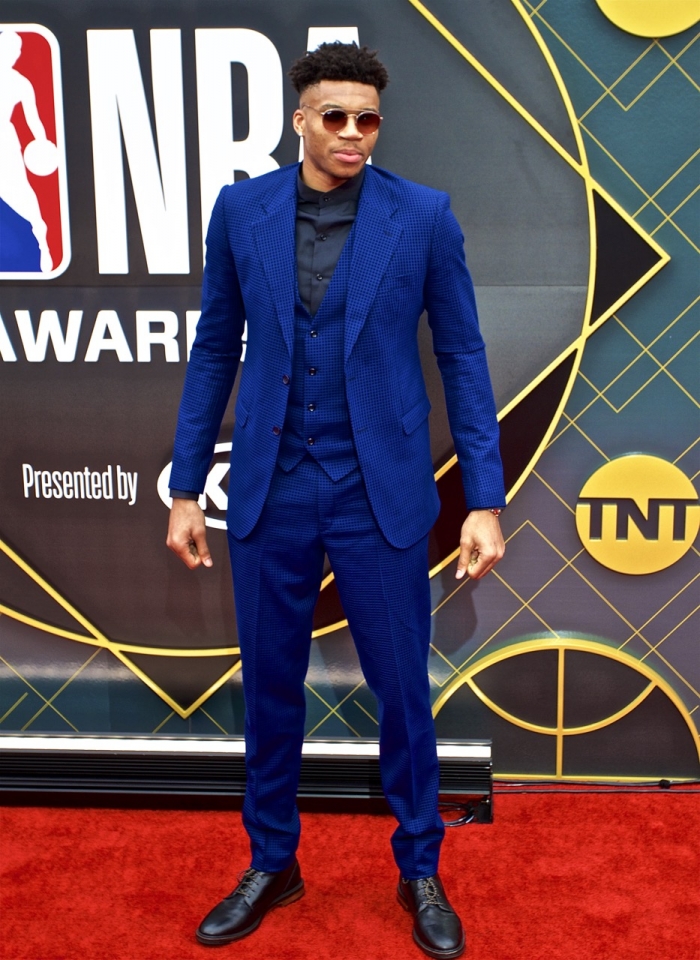 As the 2019 NBA Awards came to an end on Monday, Giannis Antetokounmpo was named the 2019 NBA MVP at the Barker Hangar in Santa Monica, Calif. Tears streamed down his face as the 24-year-old gave an emotionally charged speech after receiving the NBA’s highest honor. He thanked his family and the support system that he felt led him to this moment.

“We started from nothing as a family,” he told the L.A. Sentinel.

Antetokounmpo has become widely known as the “Greek Freak,” based on his humble beginnings in Sepolia, a small town in Athens, Greece, where he was born. His parents immigrated from Nigeria to Greece to raise their family in a small two-room apartment in which they slept three or four to a bed.

Before the award show commenced, Antetokounmpo walked the red carpet with his mother, Veronica, and his brothers by his side. They laughed. They danced. Antetokounmpo was beaming as he was nominated for two of the NBA’s highest honors, MVP and Defensive Player of the Year. It was as if he had already won when he walked the carpet.  But when Commissioner Adam Silver announced his name as the 2019 MVP and he walked to the podium, the flood gates opened. The actual moment was apparently greater than he realized. As he began his speech, he touched on how far he had come up to that very moment.

He became the third-youngest player to win the MVP honor behind Derrick Rose and LeBron James. Antetokounmpo reveled in the moment, yet, he still had an eye to the future and made sure to emphasize that his goal is to win an NBA championship.

“Definitely, the journey hasn’t ended yet,” he explained. “At the end of the day, I’m going to stay hungry. There are a lot of goals that I have set for myself and for the team also, and I’m a guy that whenever I set goals, I try to accomplish them, no matter what.” 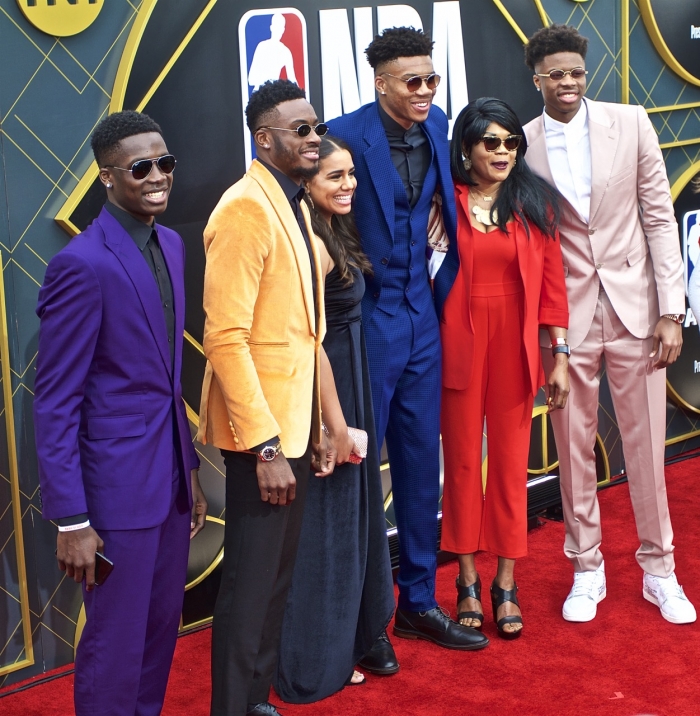 Antetokounmpo bested Houston Rockets’ James Harden and Paul George of the Oklahoma City Thunder for the award. Harden, who won the 2018 MVP was second in this year’s voting after scoring a career-high 36.1 points per game, the highest average since Michael Jordan in 1986-87. While George, an early MVP favorite, finished third in the voting. Both George and Antetokounmpo were each Defensive Player of the Year finalists but that award was ultimately taken home by the Utah Jazz’s Rudy Gobert for the second consecutive season.

“MVP is not about stats and numbers,” stated Antetokounmpo. “It’s about winning. We created great habits throughout the season and were able to stick by them, and that’s why we were able to have a chance in every single game we played.”

As the Milwaukee Bucks’ centerpiece, Antetokounmpo led his team to a league best 60 wins and the Eastern Conference finals where they were eliminated by the NBA champion Toronto Raptors. It was the first time the Bucks made it past the first round of the playoffs since 2001.

“It is all about winning and all about making sure you go out there and do everything you can to win,” Antetokounmpo reflected. He averaged 27.7 points, 12.5 rebounds and 5.9 assists per game this season.

With Antetokounmpo’s new shiny MVP hardware sitting on the podium next to him, he noted that receiving the MVP award was the culmination of a memorable season. Last month, the three-time all-star was named to the first-team all-NBA and all-defense list. He was also voted a 2019 All-Star team captain alongside Lakers’ LeBron James.

Antetokounmpo remarked that a large part of his drive for greatness came from Kobe Bryant.

“Kobe saying that I can be the MVP of this league, that should be my goal, that definitely motivated me and helped to make me a better player,” he reflected. 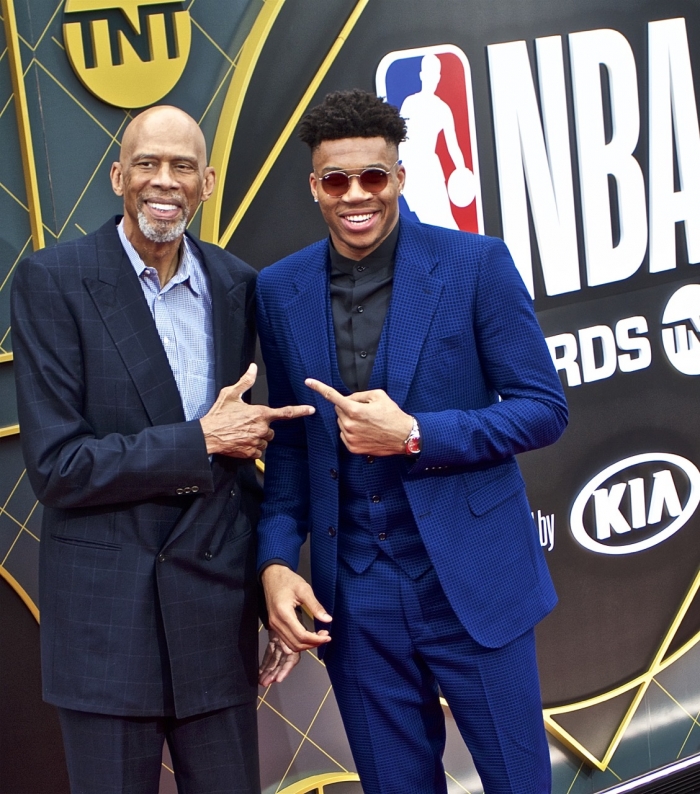 The 2019 NBA MVP Giannis Antetokounmpo poses with NBA Hall of Famer Kareem Abdul-Jabbar at the 2019 NBA Awards at the Barker Hangar on June 24, 2019 in Santa Monica, California. (Mesiyah McGinnis/L.A. Sentinel)

As Antetokounmpo completed his sixth season in the league, he became the first Bucks’ player to be named the league MVP since Kareem Abdul-Jabbar in 1973-74. He also became the first player to average 25 points and 10 rebounds per game since this year’s NBA award show host and NBA great Shaquille O’Neal did so in the 1999-2000 Lakers season.

The former 15th overall pick in the 2013 draft dedicated his MVP honor to his family and his late father, Charles, who died in 2017. Even the toughest players in the audience seemed to feel the power of his emotion, as Antetokounmpo was overcome by the realization of a dream and the honor that he seemed so proud to shine on his parents, who sacrificed and supported to make a better life for their family. 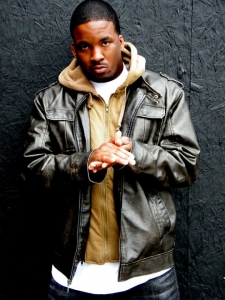 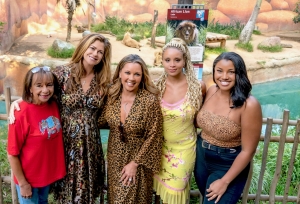 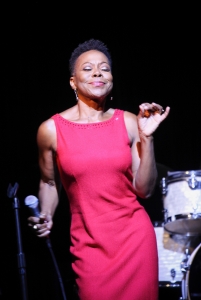