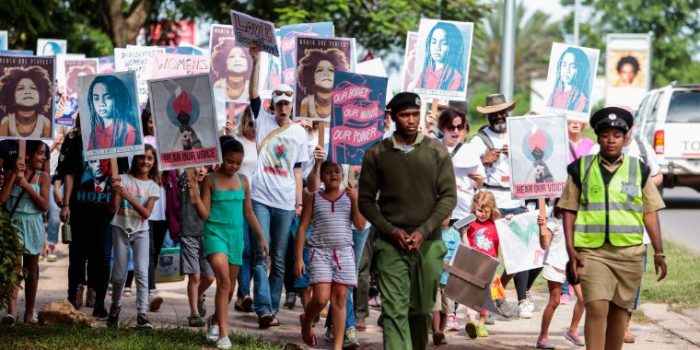 Building on the vision and mission of the 2017 National Women’s March in the U.S., women around the world will mark January 19 with marches and other actions “supporting the advocacy and resistance movements that reflect our multiple and intersecting identities.”

In Zambia, defenders of human rights and gender equality will be invited to “join us and not rest until women have parity and equity at all levels of leadership in society.”

The main march in 2019 will be in Washington D.C., but there are dozens of other marches that are scheduled for the same day. So far, there is least one in every state.

Some states will hold multiple marches: California will have 20; Michigan and Florida will each have eight; and Pennsylvania, New York and Texas will each have seven.

Outside of the U.S., marches have been announced in Zimbabwe, in Lusaka (Zambia), in Kampala, Uganda, in Johannesburg, South Africa, Tel Aviv, Little Rock, Arkansas and Potsdam, NY to name a few.

Under the hashtag LookBack, MarchForward, the Lagos, Nigeria, group wrote: “Nigeria women rise, millions strong, around the world to answer the call against injustice and hatred. We march together with Global Women – because injustice knows no boundaries.”

“People are tired and people are outraged, and what we want to do is demonstrate to folks that we have a strategy and a platform and that we are more organized than ever… despite the fact that it has been a rough two years,” said Rachel O’Leary Carmona, chief operating officer of the Women’s March.

“I think that folks need to come together to remember the power and the influence that women built coming out into the streets in 2017 and 2018,” Carmona said.

This year’s event was marred by the defections of several groups and individuals criticizing march co-founder and current co-president Tamika Mallory and Carmen Perez over perceived antisemitism.

Ms. Carmona cast the controversy as the growing pains of a new organization that is struggling to build a diverse coalition. She said steps were being taken to ensure that Jewish women felt welcome, including giving Women’s March leaders education about anti-Semitism and adding Jewish women to the organization’s “unity principles,” which highlight groups that are considered especially vulnerable.

Friction with some supporters was highlighted in The New York Times and The Atlantic Magazine with stories headlined “When Progressives Hate” and “The Women’s March has a Farrakhan Problem.” Among those who have withdrawn from the global event are EMILY’s List, the National Council of Jewish Women, The Southern Poverty Law Center and the Stephen Wise Free Synagogue.

Among those continuing to support the embattled organizers is teachers’ union president Randi Weingarten who posted on Twitter: “While we don’t agree on everything, (organizers) Linda Sarsour and TamikaDMallory are warriors for justice and I am honored to know them and work with them & call them friends… glad to have this meeting today w/ them & Rabbi Sharon Kleinbaum debunking myths.”

Other sponsors of the march include Planned Parenthood, the ACLU, Jews for Racial and Economic Justice and the Bayard Rustin Center for Social Justice. A full list can be found at the website womensmarch.com