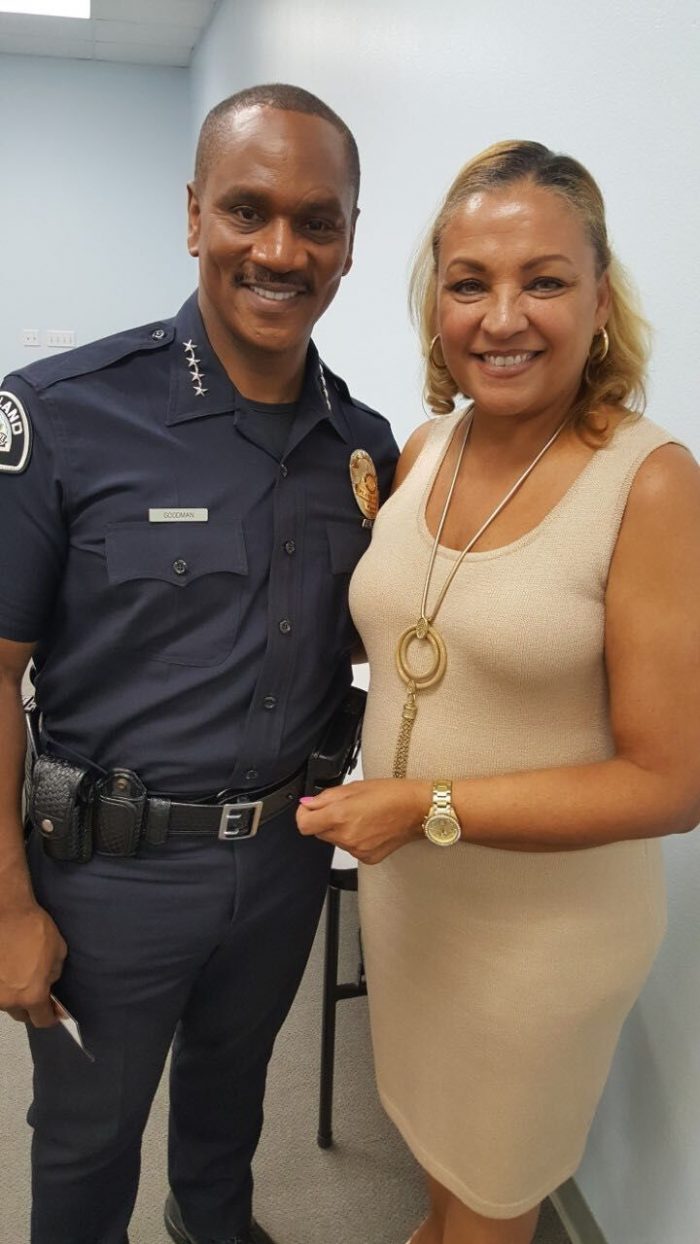 Upland, California was officially established on May 15, 1906 and I have called it home for close to 30 years now. With over a century’s worth of history, the city now has its first African American Police Chief. The phrase, “Hail to the Chief” is the official Presidential Anthem of the United States of America, but I had to use it here to pay honor to this pioneer’s achievement as another “first.” In a time where there is so much in the news about police brutality, the lack of civility and pure frustration towards police, it brings me hope to learn there’s someone in charge that plans to change the conversation and hopefully improve the relationship between police officers and the community.

The dynamics and demographics of Upland (like most small towns) has changed quite a bit since its founding.  It started primarily as a majority all White community.  Over time different cultures began to migrate to the area for different reasons and today, according to the census, it has close to a population of 78,000 people.  The ethnic breakdown is approximately 42% white, 38% Hispanic, 8% Asian, 6% African American and 6% other.  Although the ethnicity demographics of the city have changed, the leadership has still been predominately White male – until recently.  Today, we have a woman mayor (Debbie Stone) and women have a heavy presence on the city council.  The lack of representation has long been a concern for me. So much so, that it caused me to run for city council close to 15 years ago.

Our new Chief of Police, Darren Goodman is truly a “good man.”  He is a 27-year veteran of the San Bernardino County Sheriff’s Department and served as the Captain of the Chino Hills Police Department.  He has proven to be a strong advocate around community policing and incorporating technology and community partnerships to help address issues around crime and quality of life issues.  I recently attended a gathering with local African American community leaders who were given the opportunity to meet the new Chief and learn about his commitment to helping make our community better and improving relations between the residents and police force.  He plans to do this by talking to residents and leaders to learn about their concerns and how, together, we can solve them.

Chief Goodman comes to the table with both practical and theoretical training.  He holds a master’s degree in Public Administration from the University of Southern California (I won’t hold that against him…go Bruins!), and he completed his doctoral studies at USC’s Rossier School of Education.  He also graduated from Harvard University’s Kennedy School of Government, Senior Executives in State and Local Government.  With all of his acquired knowledge, education and training, he also exhibits a level of compassion for humanity that ties the two worlds together. Under his leadership, I believe he plans to bring about cultural understanding, awareness and sensitivity training to his police force while also encouraging the community to take personal responsibility for helping to bring about change.  Together we can do it!

Omarosa is Not Your Dog, Trump

Children on the Front Lines

Living and Singing Soul with Aretha: Respecting Our Awesome and Soulful Se...