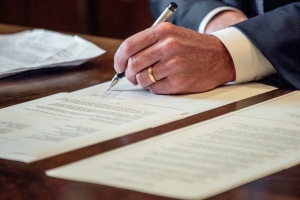 Cooper has served over 35 years on death row at San Quentin State Prison for the crimes.  “Mr. Cooper maintains that he is innocent of the crimes of which he was convicted and contends that the evidence introduced at trial against him was manufactured, mishandled, planted, tampered with, or otherwise tainted by law enforcement,” said Newsom in executive order N-06-21, which he signed on May 28. ... read more »
Wendy’s Window: “Hail to the Chief!”

The dynamics and demographics of Upland (like most small towns) has changed quite a bit since its founding.  It started primarily as a majority all White community.  Over time different cultures began to migrate to the area for different reasons and today, according to the census, it has close to a population of 78,000 people. ... read more »
ADVERTISEMENT
ADVERTISEMENT
Videos
WATCH: On the Red Carpet at “Hitsville: The Making of Motown” Premiere