From officer involved shootings, to home invasions and mass shootings, bullets see no color. When an individual falls victim to a bullet, this reminds communities across the world why there is a constant need for a call to action.

Orange, a color most relate to the wardrobe color of hunters, is also the color of National Gun Violence Awareness Day.  Every year on June 2, the nationwide campaign encourages people to take pictures of themselves and post them to social media platforms using the #WearingOrange and explain why they support the cause.

“Orange lets everyone know, I’m here, and I’m standing out. It can be seen from both near and far. When the sun hits, it gets brighter. I think it is beautiful and I think it will save lives,” said Cleo and Nate Pendleton.

The movement was created by the friends of 15-year-old high school student, Hadiya Pendleton to celebrate her life and the lives of others who have died due to gun violence.

Pendleton was shot and killed at Vivian Gordon Harsh Park in Chicago, Illinois a week after marching in President Obama’s 2nd inaugural parade as a majorette. According to the police report, Pendleton was looking for a place to take shelter from the rain when the gunman jumped a fence opening fire. This resulted in Pendleton being shot in the back. One hour later, she died at University Chicago Comer Children’s Hospital.

“The first time we asked people to wear orange, we went out all around Chicago and we passed the t-shirts and the buttons out. We got a lot of support from people all around the world and all around the city,” said Pendleton’s friend, Araiyah Willis.

Today, the campaign has since grown in solidarity, inspiring celebrities such as actress from VH1 “Hit the Floor” Kimberly Elise, blogger Perez Hilton, and television personality from “Basketball Wives LA” Tami Roman to share their reasons for wearing orange. The movement has also started a website where supporters can purchase merchandise and apparel with the Wear Orange hashtag.

“Wear Orange was created to make it easier for people to show their support for common sense solutions that will save lives. If you believe there’s more we can do to help end gun violence, wear orange on June 2nd. But don’t stop there. Explore events and ways to get your community involved in the movement,” said Cleo and Nate Pendleton.

For more information about joining the #WearOrange campaign or to take action, visit the website wearorange.org. 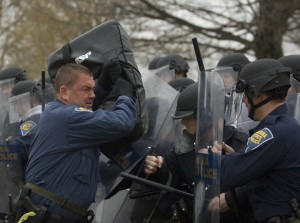